5 of the Weirdest Apps Arabs Ever Made

From revealing wedding night love-making secrets to running through the hot dry Arabian desert in a galabiya, here is a list of the weirdest Arab apps you could possibly come across. 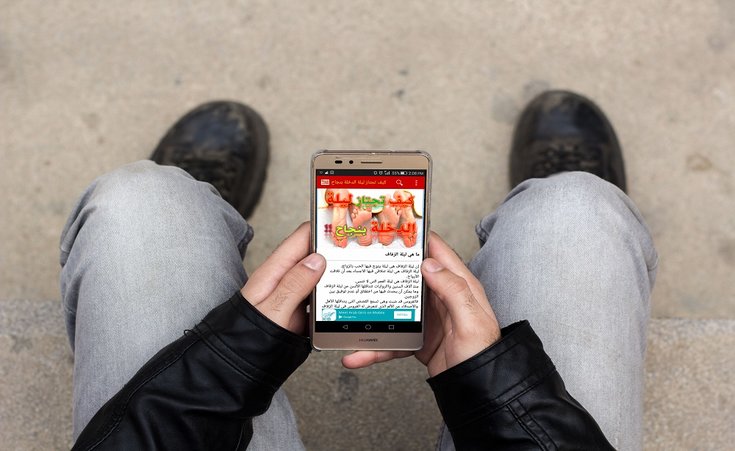 Egyptians have grown tolerant of some weird shit, because Egypt is full of it. However, it's one thing to deflect weird shit we spot on our way to work, TV, or written across the back of a microbus, and a completely different thing when it starts popping up where we can't possibly ignore it; our phone screens. By sheer coincidence, we came across an app that promises to reveal 'Wedding Night Secrets in Detail.' And because we know that hidden makeup tips and flower arrangements are no secrets, our curiosity piqued and sent us on an investigative journey to see if we could find apps that are just as weird. Little did we know we were stepping into an Egyptian and Arab-laden minefield of bizarro awkward freakishness, unmatched by anything, not even Lady Gaga's wardrobe. And we thought we'd share the embarrassment with you because we care and could use some company. According to its description, this app provides answers to all those wedding night questions we couldn't ask in class, like the intriguing "What do I do if I can't get an erection on my wedding night?" The sex-educational app is, naturally, almost exclusively addressing men, because why would women need to learn such things? It's not like they'll be partaking in the fun or anything! This app's description has one thought-provoking question; Did you ever feel that you're not pleasuring 'your woman' the best way you could? Ain't nothing wrong with some reflection and performance evaluation. Because a woman's orgasm is the greatest mystery of all, men are offered this guide, which says that women have EIGHT different kinds of orgasms, to enable them to pleasure their women. The app description reads: "The sex games presented in this app will help sexually suppressed couples to overcome their shortcomings by walking them through what they should be doing in bed together." Make sure your phone is fully charged when you try this app, because your connection isn't the only thing you're going be losing if your phone dies. We know Amr Diab is not the first celebrity to have his own app, but that doesn't make it less weird. Amr Diab's app, however, stands out with its 'Book Amr' option. Didn't we all once find ourselves in a situation where we wanted to book the Middle East's number one pop star for the next cocktail party and didn't know where to look? Luckily, with this app, our worries have come to rest, we can now 'book Amr' with a single click. We can also listen to all his music on this app, because YouTube is overrated anyways. This app is the lovechild of Emirati Subway Runner meets Super Mario. If this won't make you live out your childhood fantasy of being a cute Emirati kid running through the hot dry Arabian desert in a galabiya, we don't know what will.