9 Times We Wanted to Give Sherif Fayed the Evil Eye

Khamsa weh khmesa. Social media sensation Sherif Fayed makes it really hard not to give him the '3ein' as he constantly reminds us of how epic his life is in comparison to ours with pictures of him in magical places and with massive celebrities. 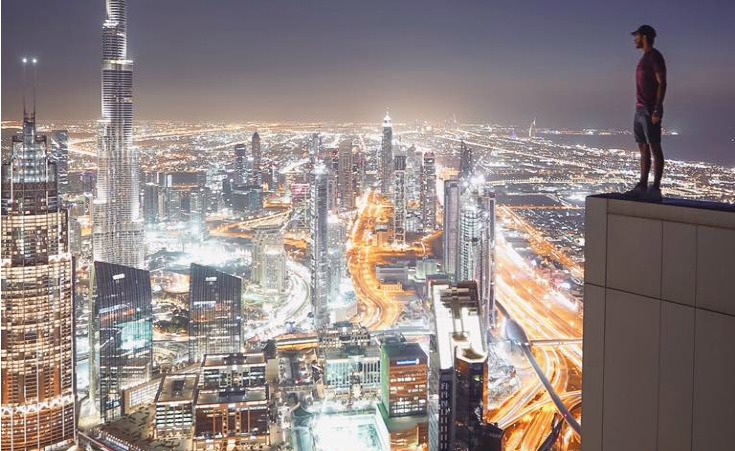 If you're on social media for long enough, you will stumble upon one of TV host/social media influencer Sherif Fayed's kickass adventures. And it will make you rue your own miserable existence. From photos with superstars to sunbathing selfies on some blue paradise in the middle of the sea, Fayed's Instagram posts are the source of a lot of #InstaEnvy.

Fayed is a glowing example of young, vibrant, glamorous success and we wish him all the best in every adventure he embarks upon. We also wish we didn't have to sit in an office behind a desk for nine hours a day eating stale fries while he galavants across the globe, but you can't always get what you want.

So here are 9 times his Instagram account made us want to cry into our keyboard out of sheer envy.

1. One of Sherif Fayed's latest images that probably (definitely) prompted his social media followers' evil eyes of envy was his picture atop one of Dubai's highest spots. The photo entitled 'Serenity' is Sherif Fayed's dare-devil, envy-invoking version of what in the lives of most of his followers is drinking a cup of coffee in a dim-lit room with a soft breeze. His version of serenity is cooler obviously.

Serenity. Standing on the edge, 80 floors up. Would you stand here? Captured by the talented @pixelville go show her some love! ❤️ #Dubai #MyDubai

2. And then there are times when you're stuck in traffic and you open your phone to swipe through your feed, only to find this staring you in the face. It feels like Sherif has just walked up to you and whispered, "Watch me from Egypt, you miserable shit" in you ear and walked away.

3. In this Christmas special, Fayed is basically trying to show Santa how he'd beat him at his own game. It is said that after seeing it, Santa sent Fayed his wish list for Christmas along with a short letter with the details of what trail mix his reindeers like to eat.

Santa&#39;s reindeers have gone missing so he found a new way to deliver all those presents before Christmas! Have you been naughty or nice? #Wakesurf #Christmas #Santa @searidersuae

4. Obviously, Fayed has a thing for standing on really high ledges.

It&#39;s always good to remind yourself how small you are in this big world. Would you stand here? #Oman #JabalAkhdar

5. Oh yeah, hey there Thierry Henry. Here I am casually cruising around with you. I also casually call you Titi because we're best buds like that.

7. And this here is what Sherif Fayed calls a walk in the sunset.

9. Any chance this is Photoshop?