Between ancient and modern times, Egyptians really know how to go all out when it comes to love. 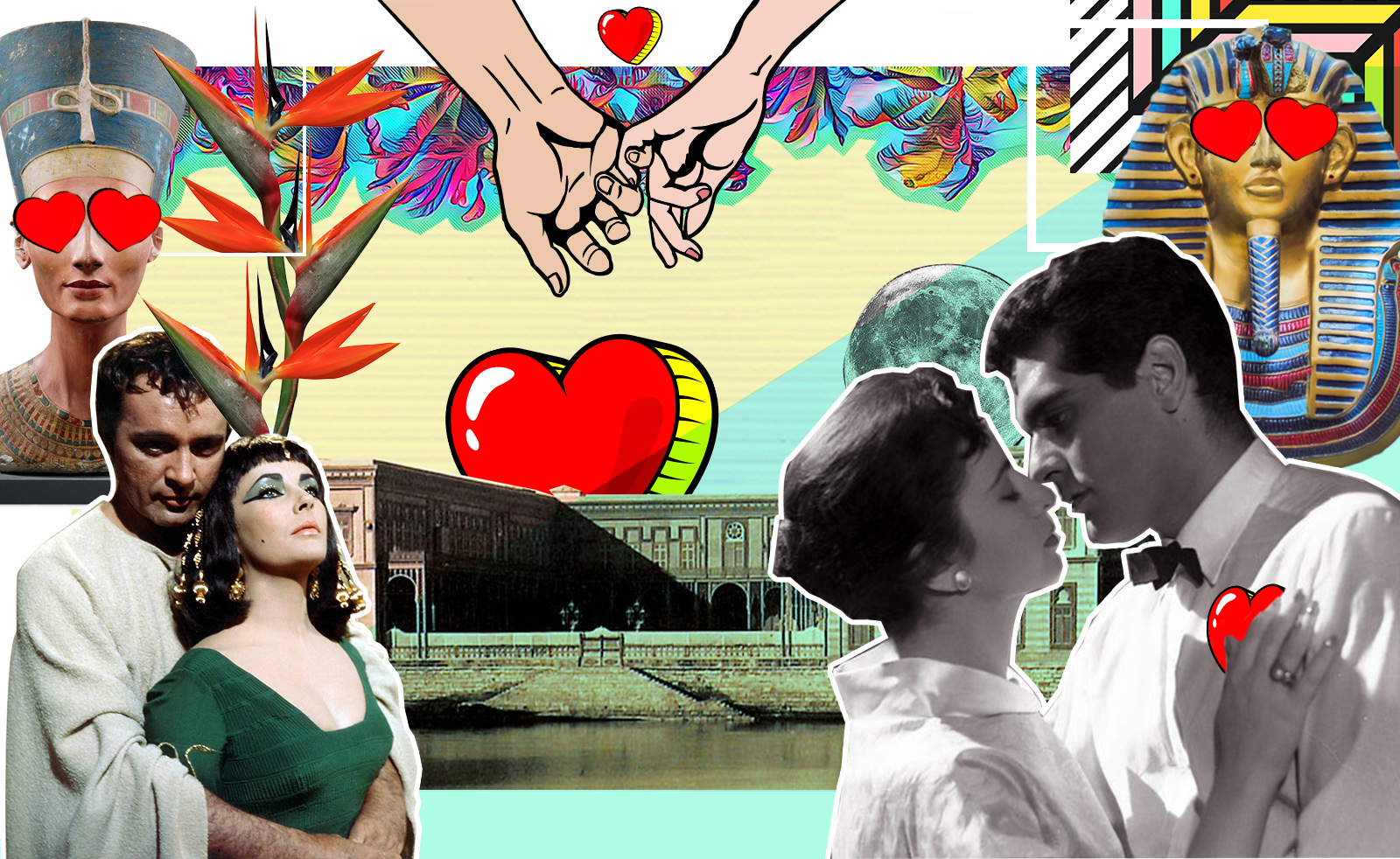 In a generation that's more interested in what their love looks like on Instagram than the actual relationship itself, romantic gestures seem to have gone out of style. Taking a look back into Egypt's history though, flowers and chocolates for Valentine's are child's play where our Egyptian forefathers are concerned. They didn't stand on top of tables either, proclaiming sweet nothings, they built badass temples and magnificent palaces to prove their love. Here are 6 Egyptians that show us how its done (well, minus the psycho who hijacked a plane).

Build it and She Will Come Akhenaten, an 18th Dynasty pharaoh, was most known for having integrated a form of monotheistic belief system during his ruling. While his introduction of an alternative religion didn’t take off with a number of Ancient Egyptians, he did manage to succeed in matters of the heart. Akhenaten - who was married to Nefertiti - dedicated a temple to his wife, a first in Pharaonic history. There are different accounts though, with some sources saying it was a temple and others saying it was a a nondescript structure. Regardless, at the end of the day, he still built her something very big.

And as if proclaiming your love by building a temple isn’t enough, he also commissioned several statues embodying the queen standing either beside his statue or alone. At the time, that was an unusual honor only bestowed on kings. In several statues, the queen is represented with features characteristic only to her, which was another unusual attribute for that period. Rendered in most of her sculpture depictions as an epitome of beauty, there’s still an uncertainty on whether all the statues were accurate portrayals or an idealized version of the queen as seen by her husband. In layman's terms, was this actually her or was it that her husband was so blindly in love that he saw her as a goddess of unparalleled beauty, divine grace and overall awesomeness? The 1950s saw Egypt placed on the international map by being home to the third largest film industry in the world. Meanwhile, two iconic figures in Egyptian cinema’s golden age were falling in love on-screen and off: Omar Sharif and Faten Hamama.

Sharif and Hamama stood in the face of religious conflict in a country that, to this day, is aggressively opposed to interfaith unions. The love-struck duo - whose affair would last for over 20 years - didn’t seem to care though and embarked on their fairytale, throwing caution to the wind.

Egypt's sweethearts actually met on-screen. Hamama, having no idea that her first kiss both on-screen and off would be with the love of her life, met Sharif on the set of their first movie together Siraa Fil Wadi. Coming face-to-face with his future wife, Sharif was but a handsome young man with no previous film credits to his name. Hamama, who didn’t speak English, was charmed by a nervous, love-struck Sharif trying to win her affections by reciting Shakespeare’s Hamlet to her (out of panic).  And that was it; he was cast and she was in love.

While Sharif, born Michel Dimitri Chalhoub proclaimed endless vows of love to Hamama in a plethora of gestures, the most notable one was when he converted to Islam to marry her. Often not even acknowledged, marriages between different religions are regarded as an extreme taboo with repercussions extending far beyond the respective families and to the involvement of the mosques and the churches.

These two didn't care and while they eventually divorced, it is said that Sharif never got over his first and only wife and has referred to her several times as the love of his life. While he has been linked to several women over the years - the likes of Catherine DeNeuve and Barbara Streissand - he never remarried. "I've had a couple of adventures with women, but not the great love. I had a great love once with my wife that has to be said," Sharif has been quoted at saying.

Worshiping at Her Alter Our Ancient Egyptian forefathers clearly did everything with a bang and love was no different. Ramses II - known as Ramses the Great for the exceptional achievements attained during his reign - was regarded as one of the most powerful rulers of Ancient Egypt. This 13th dynasty pharaoh had a soft spot, though, and her name was Nefartari. Known for his devotion to his queen, he built Nefartari a temple dubbed the small temple in Abu Simbel, Aswan. While the temple shares its dedication credits with Egyptian goddess of love, Hathor, it was uncommon at the time for a pharaoh to build his queen a temple, having happened only once before.

The statue depiction of Nefertari is of equal size to that of the king which at the time was not in keeping with Ancient Egyptian customs. Ancient Egyptian tradition dictated that statues of the queen never reach higher than the king’s knees. Not impressed? Well, he also built her a tomb known for its opulence and it's colorful artistry, considered an artistic achievement at the time.

Depicted by her king in a significant number of paintings and statues, Nefertari is said to have been the only Ancient Egyptian queen to be represented officiating a ritual ceremony. What’s more is that her statue stands beside that of her husband’s. And that, in and of itself, was a testament to the high status she held in the heart of the great ruler. Both strong leaders in their own right, Marc Antony and Cleopatra had a love affair much like Romeo and Juliet's with the exception of the century and the continent. Unfortunately, you can’t fall in love with the commandant of your rival state - it’s considered sleeping with the enemy or something. Cleo didn’t care, though, and she went on to take part in one of history’s greatest love affairs.

The explosive romance started when Cleopatra, the last monarch of the Ptolemic Egypt, was called upon by Roman general, Marc Antony. Float-walking off her boat in flowing white robes, Antony was instantly infatuated with her. Soon thereafter, Cleo requested the general to murder her sister in a paranoid attempt to secure her throne. Once the formalities were taken care of, Antony moved to Egypt and the couple co-founded a wine club, The Inimitable Livers, which historians have construed to be an excuse to go wild basically. Hey, fine by us. It must be tough running a kingdom, so a glass (read bottle) of wine at the end of the day seems fair. Many saw Antony’s love for the queen as an act of betrayal and infidelity.

They were unfazed though, probably because they both likened themselves to gods. Anthony equated himself to God of wine and immorality, Dionosis, and Cleopatra considered herself to be a representation of the Egyptian Goddess of fertility, Isis. They were actually quite compatible what with their high political status, their mutual love of wine, their murderous streak and their lack of modesty.  If ever there were two people made for each other, these two.

Their dangerous liaison ended in tragedy, however. While there are several accounts of their suicide, the most prominent one is that after being defeated in battle, Antony got news that Cleopatra had killed herself and flung himself on a sword. Upon hearing that she was not actually dead, he was taken to Cleopatra and died in her arms. Cleopatra in turn, killed herself by poison.

Powwow at the Palace There was once a time when Cairo was referred to as The Paris of the Middle East - something that Khedive Ismail envisioned. While its not mentioned why the prototype for the remodel was Paris, there was one thing in France that we know caught his fancy. Gaining most of its popularity as rumours, stories of the Khedive’s obsession with Napoleon III’s wife, Princess Eugenie, are widespread.

One of the rumored accounts claim that Khedive Ismail met the princess as a student in Paris. And while he went on to become Khedive, he never forgot about his first love. Years later, he would invite Princess Eugenie along with her husband to witness the opening of the Suez Canal in 1869. Fate, the wily minx, would have it so that Eugenie’s husband wouldn’t be able to attend the opening. Instead, she came on her own, unaware that she was walking into a grand tale of love that would later make it into Egyptian folklore.

Enamored with the princess, the Khedive built her the El Gezirah Palace, as one does, to commemorate his love for the unattainable muse. Let that sink in for a minute. A palace. For a woman who wasn’t even interested.

The princess was even gifted a replica of her room from Paris in the palace. The structure was later on restored in 1894 into what we know know as the Cairo Marriott Hotel in Zamalek, while the room is said to have been relocated to the Citadel, in the Mohammed Ali palace. Here’s someone giving the pharaohs a run for their money, with all their dramatic temple building and over the top statue sculpting. Enter Seif El Din Mostafa, who hijacked a plane, causing international terrorism alerts, a few almost-heart attacks and probably a significant number of anxiety disorders.

Mostafa, still in love with his ex-wife, Marina Paraskou, claimed to be wearing a suicide built when he hijacked an EgyptAir flight. This Egyptian man, stung by the love bug did it to reach his beloved, who is a Cypriot national.

He demanded that flight 181 - heading from Alex to Cairo - reroute to Cyprus so that he could see the apple of his eye. And honestly, ain't nobody about to say no to a man sporting a bomb belt. 63 people, including the crew,  were on-board the plane that diverted its course landing safely in Larnaca Airport in Cyprus. The Foreign Ministry of Egypt  was quoted saying post-hijack that "he’s not a terrorist, he’s an idiot”. An idiot in the name of love. That’s not so bad?

Mostafa, bless him, is not one to give up though, and news reports stated that witnesses saw the love-struck idiot throw a letter meant for Paraskou at some point during the whole ordeal. Now if that ain’t love, we honestly don’t know what is. Thankfully he was arrested, for obvious reasons. You know, inciting fear in the heart of innocent people and whatnot.

We tried finding out if Maria ever forgave him for whatever happened between them and perhaps took him back. Alas, Google does not know.