One man’s trash may yet be another man’s trash, but sometimes, you’ll come across a gem in the rough. 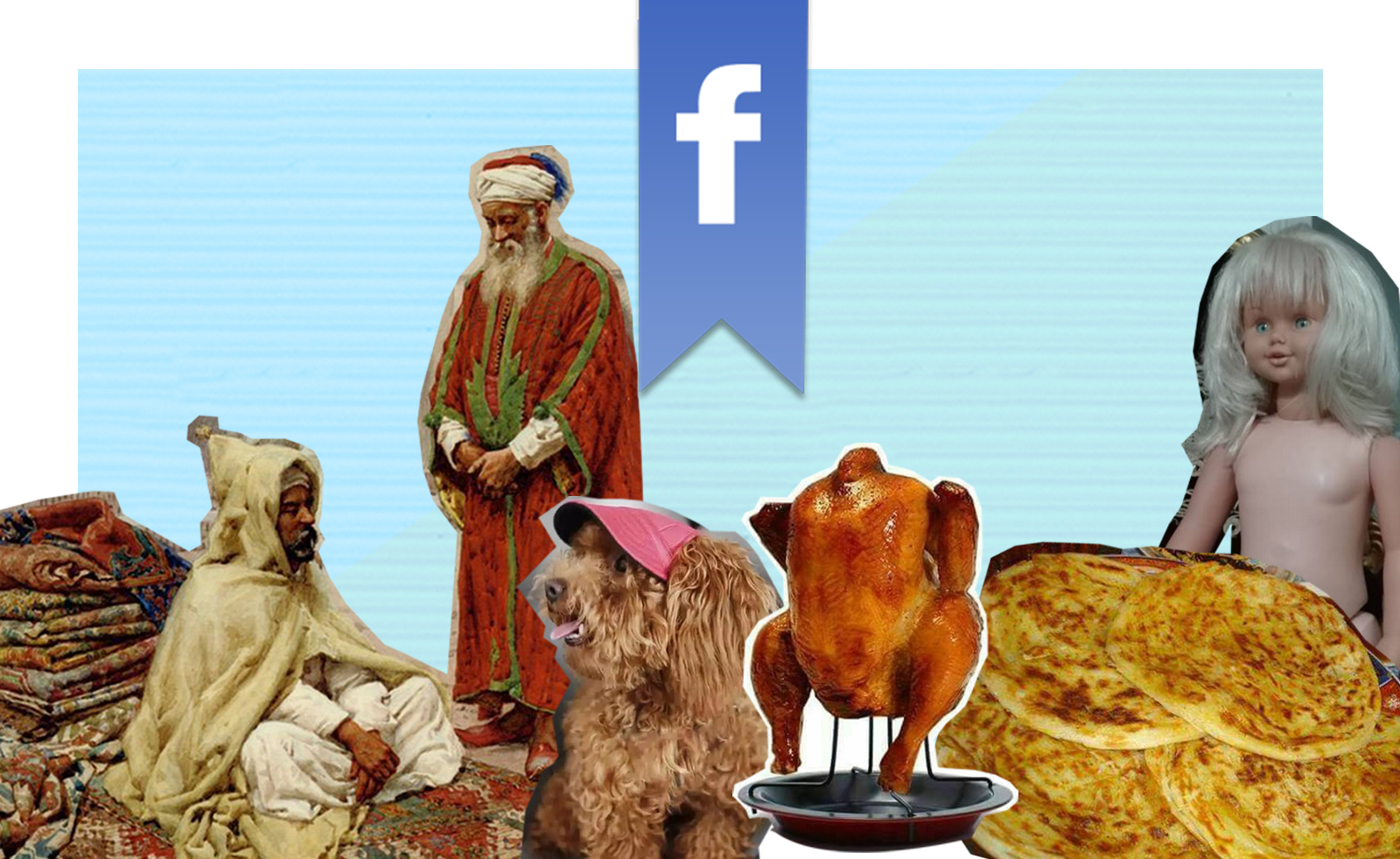 Facebook’s Marketplace is, in some form or another, much the same as any other example of consumer-to-consumer online marketplace; the likes of eBay, OLX, Craigslist and even [REDACTED] for those of you into the stranger things in life. Folks with an active Facebook account can just waltz in, plop their “wares” for sale, set a completely realistic price and start making an honest-ish living off the material greed and unyielding consumerism of the masses. It's a far more lucrative venture than your designer cupcake business, Rania.

Seeing as we work tirelessly to provide you, our bread and butter, with all manner of necessary (often lifesaving) information and clickbait philosophy, we thought it of the utmost necessity to share with you just a few examples of what you might chance upon, in this dimension’s (Egypt's) Facebook Marketplace. If you feel like grabbing any of these hot items off the Facebook Marketplace, we don't judge you, but you probably need to reevaluate your life at this point. It takes a special kind of Chinese to mess up the packaging for history’s least inventive superhero (fight me nerds), and yet, this exists. Yes, friends, for the insensitively low price of EGP 250 (tax-free), you too can own a mint condition, one-of-a-kind (for good reasons) Guy-with-S-on-Chest action figure. He even comes with with special nihilist action moves; do nothing, pose ironically, accept the void. Whether you want to instill a sense of fear and discomfort in your household, have a thing for trying to imbue inanimate objects with the soul of Shub-Niggurath, or you’re planning to open a children’s’ clothing store (you weirdo), this prime specimen of human terror made material is here to help. You will likely never find a price as low as this for a mannequin as debonair and charming as little Susan here. If she starts bleeding from her ears, congratulations, she just ate another demon. You’re forgiven for not having much of an eye for priceless gemstones, they don’t exactly teach it at school (trigonometry is much more applicable apparently), but don’t you wish you’d taken those extra appraisal classes after-hours? Had you done that, you’d realize just how precious these rare specimens of Shitite are; gathered from only the most obvious and slightly menacing corners of your backstreet, these gems can all be yours for the steep price of your own  dwindling intelligence. Just don't expose them to any jewelers; they'll hurt your feelings. We debated whether or not to just say “this is sex chocolate” and call it an entry (and a day), but we have just a smidge more integrity than that. Yes, loyal clicks, this is the real deal; sexual (and hopefully consensual) chocolate, and though the picture says it’s “for woman,” there’s also a variety that’s “for man.” Who knew that all truly needed for a memorable sexual experience was odd Chinese chocolate and not foreplay or mutual respect or any of that hot garbage? You do now. We like to think we’re pretty good at telling what’s truly fashionable and what the writer of this article wears on a daily basis, but even with our impeccable record, we find it difficult to tell what’s hot to trot for a pupper in their prime. That is until we stumbled upon this ultra-chic headdress for your woofer; it’s a hat, a particularly niche hat, that comes in many varieties for your dog to wear to protect their pupper eyes from the sun. It sells itself, and you should buy it even if you don’t have a dog. If you’re one of the few intellectually smug individuals out there who decide to shell out a fair bit of green (brown? Yellowish?) for an actual router and not that plastic disappointment your ISP gives you, you’ll want to do your research pretty well before laying the funny money down. This is where the Marketplace comes in, offering you only the highest-octane router this side of the peninsula; with a V8 modem, triple-injected IP's and the lowest mile per megabyte, this router is just the ticket you need to win that stubborn match of CS:GO. Legend tells of how its owner was forced to give it away after receiving too many cyber speeding tickets from the CIA. Dog hats, inanimate spawns of Satan, one-of-a-kind gemstones, it all amounts to pretty much nothing when you come across something as heartwarming as this. The Facebook Marketplace is full of people trying to make an honest living selling their homemade happiness (it's dripping with grease), and these buttery motherfuckers are only some of many. Just look at that texture, that handmade quality, the level of craftsmanship that went into each and every one of them. You can practically smell the obesity slowly making its way to your liver. You never really know what your chicken has done in life, up until the cleaver falls down, but if it’s anything like what the ancient chicken texts tell us, it’s probably some bad shit. Most chickens, unfortunately, live a life of fury, malice and poop, and it is for these reasons and many more that this device exists. Prop your sinful chicken cadaver on this expert shaming device to help absolve the carcass of its sin, while also making sure all its sides are equally crisp and wholesome. Yeah no, we’re not running out of creativity here but really; it’s just wood. Yes, happy-go-fucky people of the Internet, this industrious entrepreneur just go to show that you can make money doing almost literally anything, and while you lay there on your parent’s couch, complaining about the lack of lucrative career options, somebody out there is hustling to make an honest buck, using only the finest in e-commerce technology. You should be ashamed of yourself. Right, well, this is going to almost certainly get us in trouble.

Why wait for your child to go through all that horrific socializing at school just to have a sleepover, when you can just buy your own sleepover guests. Indeed, precious viewers, you too can buy your very own slaves indentured servants to give your child the sleepover of a lifetime, all the time. They even come with their own horrific wardrobe, for when your child inevitably gets bored, discovers the Internet and tries to flush them down the toilet. Luckily, you’re a responsible parent by now, and the Marketplace probably has a shovel or an axe or something to help you along. We’re pretty much dumfounded at this point. Not only is this an intriguing entry into the annals of the Marketplace, but it also presents an existential quandary; is this woman for sale? Is the tacky ”retro” décor for sale? Is that disco ball supposed to be on the floor? What’s for sale here? Where did I leave my keys? Too many elements going on at the same time; far more for our delicate writer-brains to fathom, and if you can figure it out, send us an email or yell at us on the street, you’ll know it’s us from the crippling depression. We’re nothing if not blatantly honest when we say we don’t enjoy mocking the visually impaired. Now that that’s out of the way, what the fuck is this? From what our science and applied thermophysics department tells us, it’s a form of lighting that hangs off your neck for when you want to…read a book? What’s more of a concern is how the description says it’ll allow you to read and not cause any undue commotion for those around you, except if that were around us, we’d want to call the authorities, immediately.

Those are just a fraction of the things you can find on the Facebook Marketplace, and we’ve delved into it for you so you can make a more-informed decision before you decide to do it yourself. So next time you decide you need a McGuffin, no matter how outlandish or delicious it may be, don’t put on your sneakers or pick up the phone, just head to your local Marketplace and try not to get killed. We need your clicks.