NASA has some more big news coming our way. To prep, we're going back and looking at the 10 best images NASA has given us this year, like that super Instagrammable shot of Khufu, Khafre, and Menkaure. 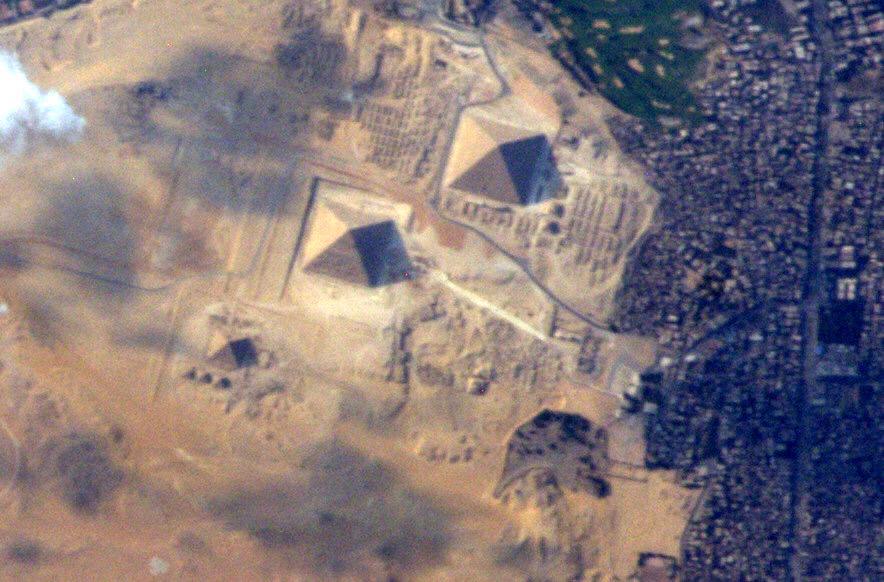 NASA just announced that they will be holding a briefing on Thursday to shed light on "key" findings about the martian atmosphere. This prompted us to reminisce about all the freaking amazing things NASA did this year - water on Mars, visiting the moons of Saturn, and getting some glamour shots of everyone’s favourite not-a-planet-anymore, Pluto. Photographers aboard the International Space Station took time off from their busy schedules of floating around to get shots of our pale blue dot. Even old, reliable Hubble is still blowing our minds after 25 years. In anticipation of the next discovery, here are the top 10 images from NASA in 2015
Enceladus Plume NASA’s Cassini spacecraft completed its closest flyby of Saturn’s moon, Enceladus, at the end of October, giving us the most detailed view of this icy moon and its geysers. These plumes are so powerful that some of the material escapes the moon’s orbit and becomes part of Saturn’s rings.
Enceladus As Cassini departed Enceladus, it got a little artsy. With the moon floating there, delicately juxtaposed against Saturn’s famous rings, Cassini must have thought ,“Whoa, this would get a ton of likes on Instagram."
Pluto Poor, sweet, Pluto. To think that people had nearly forgotten about it since it had its planet-status revoked. But NASA rekindled our love for the little planet that could with shots from its New Horizons mission. This false colour image places a face to the name that kids are learning to forget in science class.
Pyramids Astronaut Terry Virts, aboard the International Space Station, managed to get this amazing shot of the pyramids at Giza on his last day in space. Virts was quite the orbital shutterbug and posted many of his pictures to Twitter as soon as he landed. Not that his other pictures weren't great, this one just hits a little close to home.
First Solar Flare of 2015 Solar Flares are terrifying. The idea of the sun shooting a laser-lava and causing all sorts of problems for us back on Earth is so scary, it's surprising that it wasn't used as a premise for a 90s disaster movie. This shot of the first significant solar flare of 2015 shows that the potential of the sun exploding and melting all of our faces can also be beautiful.
Dead Comet TB145 When NASA announced that a dead comet would be passing just beyond the orbit of the moon on Halloween, it was a little creepy. When they showed us it looked like that, it went from a little creepy to full blown horrifying faster than you can say "killer space skull." The ex-comet came and went without so much as a "Boo!" but we will tell our kids about the Halloween of 2015 when Bruce Willis sacrificed himself to save us from the killer asteroid and Aerosmith played at his funeral.
Smoke Around A Quadruple Star System Wow. Good job, Hubble. A mass of dust that is being wrapped around, not just the two apparent stars, but a four-star system, is a perfect place to study star formation. It also makes a wicked photo op.
Curiosity Selfie In January, the Curiosity Rover on Mars compiled its latest selfie from dozens of images taken using its built-in selfie stick. While not Curiosity’s first exercise in narcissism, this photo is the first to show the rover in context with its environment. Showing the “Pahrump Hills” in the background gives earthlings an idea of how Curiosity looks to martians as it pokes around their planet.
Sunset on Pluto If you think of romantic places to watch the sun set, we bet you'd never imagine Pluto to be one of them. This image from the New Horizons mission clues us in about the day-to-day weather on Pluto. It also reveals a lot about Pluto’s atmosphere and ice mountain ranges. Not yet revealed are the romantic hotels and gifts shops to lure young lovers into vacationing on the dwarf planet.
Water on Mars When NASA teased a big announcement about The Red Planet earlier this year, the Internet freaked out. Everyone was hoping for aliens; we ended up with water. Water is good - kind of necessary for aliens, actually. The dark lines in this false colour image ebb and flow with time, supporting scientists' hypothesis that liquid water is still present on Mars. With NASA'S impending announcement of another "key" finding, we're anxious to see what sort of amazing things they've found and the images they will release.