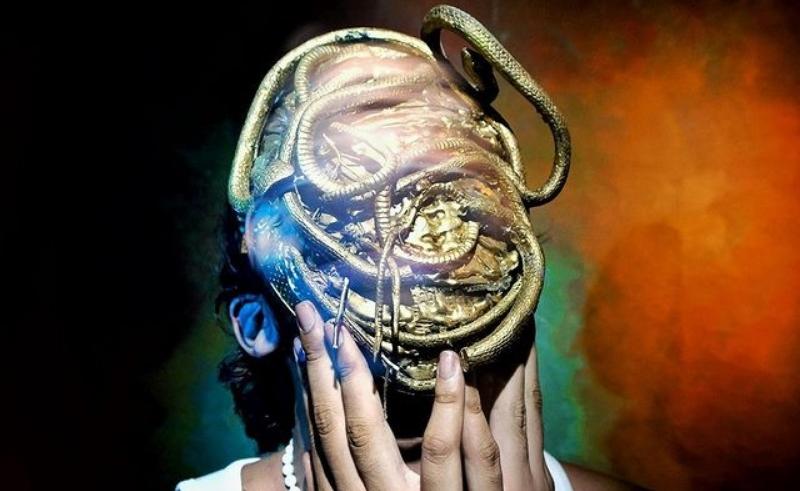 In the current musical landscape, branding and visual identity have come to play a pivotal role in an artist's growth and success. How an artist is perceived is no longer confined to their musical contributions, but to their visual presentation and aesthetic as well. With his most recent album, forward-thinking artist and producer Besh is fully aware of this change in the music industry. The Egyptian artist seems to carefully consider the details of his presentation - from dramatic photo shoots to the all-lowercase styling of his artist name and track-list, Besh is certainly a unique artist with a lot of ideas to put forward, musical and otherwise.

The album, titled ‘kncr’, explores familiar genres such as Rap and Mahraganat, with a modern twist in sonic aesthetics. Besh highlights sound design and atmosphere as key elements in the production, which make the album sound fresh and contemporary. The album explores themes of identity, relationships, and the state of the music industry from Besh’s unique point of view.

The album kicks off with the track ‘el moshkela en ana hamoot’, which opens with an organ playing a nostalgic melody. We can also hear an Arabic spoken-word sample in the background, which is washed out with reverb and effects. A steady pulsing bass line then comes in, building up anticipation that leads to a drop in which the track transforms into a hard hitting industrial-electronic wasteland. The deep and heavy drum sounds are complimented by a visceral distorted bass sound that makes this track feel intense and aggressive.

The track ends in style with a distortion effect abruptly transporting us into the title track ‘kncr’, where we hear Besh’s vocal performance for the first time, coming in with a soft yet stern delivery. The chorus of the track is a fresh spin on the Mahraganat genre, where the producer blends elements of electronic and psychedelic music with iconic Mahraganat synth sounds and drum production.

The next track ‘m32rb’ (produced by besh & eldoktor) starts with a sensitive guitar instrumental that adds a new colour to the album. However, the intensity of the instrumental quickly ramps up, leading up to a prolific instrumental and vocal delivery that see Besh pouring his heart out.

The album moves on to ‘fakboi’, which shows a darker side of the artist. The explicit, somewhat toxic lyrics of this track tackle topics of sexuality in a direct way that is rarely heard in Arabic music, and while this might be seen as controversial by some, Besh clearly intends to continue expressing all aspects of his personality without any fear or shame.  We swerve to a more intimate direction with the track ‘gg4’, produced by Badmood. The slower tempo of this track gives Besh the space to shine vocally over this lush and dreamy trap beat.

Next, the album ventures into surrealism with ‘bkrh7elmy’. A robotic voice delivers a news report which cleverly tackles the state of the music industry on top of a groovy electronic beat. The smart commentary of the text paired with the absurdity of the robotic voice make this track stand out as one of the highlights of this release.

The track ‘hawdini’ also sees another shift in direction, where smooth guitar licks and a relaxed drum beat enable Besh to deliver soft and syrupy vocals over a slick instrumental. Meanwhile, tracks such as ‘mttnfssh tani’, ‘betyfor’ and ‘of a7’ see Besh taking on more conventional sounds where he showcases his rapping skills over tight trap beats that make use of Besh’s contemporary and futuristic production style.

The album closes with the track ‘borgesara’, where we see Besh experimenting with a noisier sonic palette, exploring a more industrial soundscape with crunchy drum samples and aggressive synthesisers blasting loudly over a washed out vocal sample. As the track progresses, layers of harmony are added that give a sense of tension to the track, leading up to the glitchy outro that smoothly transitions to orchestral strings concluding one of the most unique releases of the year.