Having recently relocated to Cairo, Yassine Hariss has been exploring the music of Egypt he's been hearing so much about, first-hand. For those that know me best, the real drive behind the idea of going on an adventure to the land of the Pharaohs seeded itself in the craving to dig in deep and deeper into my roots’ culture and 'underground' scene (whatever that means).

One of my first encounters was through Instagram with a surprisingly mature teenage old Shady Sallam, a Cairo-born rapper that’s, just like a lot of the youth here, wants to follow in his idols’ steps and try his shot at becoming the next Wegz, Marwan Pablo or even Inn Ann maverick rapper Shabjdeed (who is now seen as one of the genre’s greatest).

It’s an early evening and after a little improvised photoshoot, Shady and the crew go on a drive around Cairo to show us around the city. At this point, both of us were sending tracks back and forth on the car’s speakers, trying to impress each other with our little gems.

'Little Bit' starts playing and I was jamming hard in only regret for not having discovered the song earlier on in the summer - it really would've been my anthem. I immediately caught the singer’s socials and he followed me back. At first sight, I saw a profile punctuated with a few pictures but that's only the tip of the iceberg of the abundance of talent he proudly carries in front of his relatively shy numbers. Remember guys, it’s quality over quantity.

We start exchanging texts and decide to link up in his studio to meet and see if we can work some magic together. My photographer friend Marco comes along and we spend a laid back after-work session playing beats, some of us spitting some bars and all while peaking into each of our creative minds. Time went by and we all got along super well, Marco got some neat shots, NOVO and I clicked and that’s basically how we ended up getting invited to his own album release party. From there, my whole background story fades away and disappears. Because it’s not important anymore and it’s rather what I tangibly saw, felt and witnessed first hand that matters now. We're at Cairo Jazz club on a regular Thursday night. 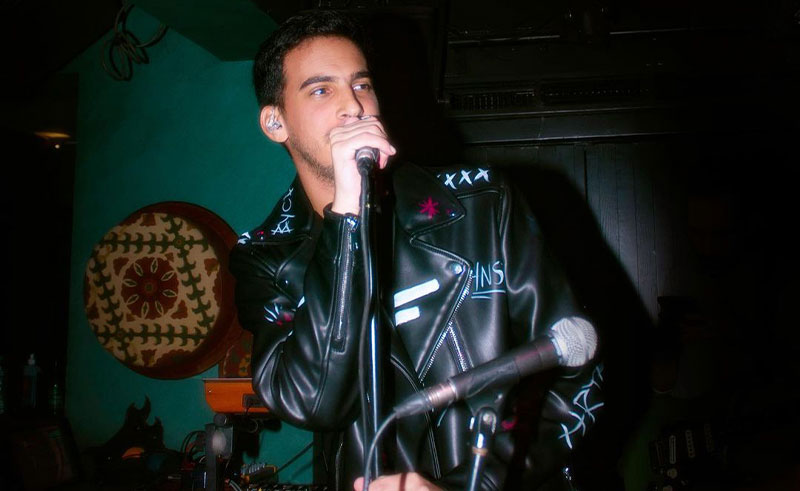 I have to come clean, I got there a bit late (bouncers were being random). Blinded by his audience rather than by the stage’s dim lights, I saw a heartfelt NOVO, for the second time only but in a completely different setting. Appearing at the full mercy of his feelings, the usually solo artist came with an orchestra that was more than in sync with their lead singer, because yes passion and friendship definitely were the two elements fuelling the band’s engine and it contagious spread to the audience too.

Because NOVO is more than just a bar spitter, a hard hitter or whatever Drake says, the once part-time Londoner is an artist, one that lives and breathes his music. And we can feel it - whether we know the man personally or not. In total osmose with his people, he soothes Cairo’s crippling chaos to sugar coat it with melody and style. For the time of a solemn night, the intimate space allowed the crooner to fully display, while introducing to some, his latest musical statement. 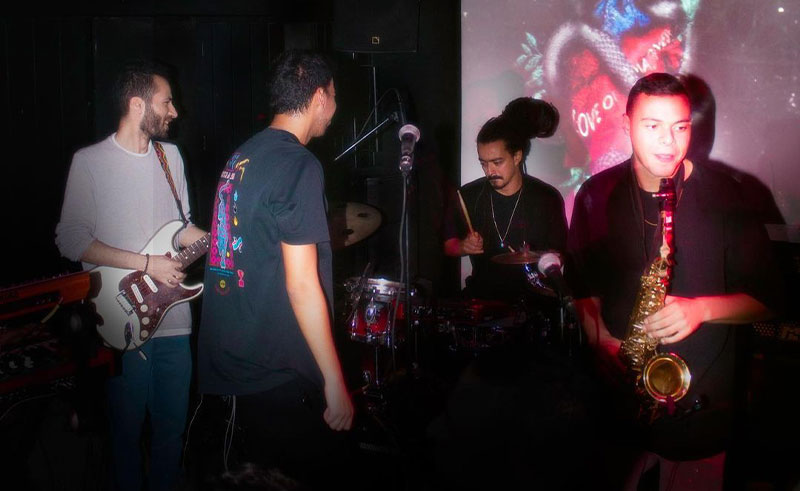 Titled Love or Madness, the seven-track EP is drenched in winter blues vibes and heartbreak reminisces. Dirging over the loss of someone who, from our understanding, was once his better half, the project strings an emotional journey that smoothly embarks us listeners on. Coming after the release of two other singles  earlier on this year, the R&b artist only gave out one invitation card, calling on the charismatic Natalie to share a compelling song together and paired himself with Issa & Assouad (who'd met at the studio) to co- produce the project.

Back to the event. If you think that we’re transferred into the digital era of music, NOVO relentlessly proves how to balance both. I’m in a dark room and NOVO’s already onto his second song, 'Nobody', arguably one of the most captivating tracks on the project that throws a bundle of heartbroken feelings onto the audience as a therapeutic way to blow some steam off.

“To be honest, my only focus preparing this project was making sure to be able to pinpoint where I was mentally, what I was going through and what I was experiencing. Basically a sequence of phases that I tried to record with each song taking over the one preceding it. When I was making the actual tracks, I was trying to figure how to convey my message appropriately while keeping my authenticity. When I played it, it felt more relaxing. I had no pressure to make people like it. It was just a testament of where I was at that time, can people want to relate to it, that’s up to them, but I wanted to make sure that those feelings were sent across the spectrum well.” He told SceneNoise a little later. “I felt relieved playing it, it was time to let that chapter of my life go and move to the next” he continued. 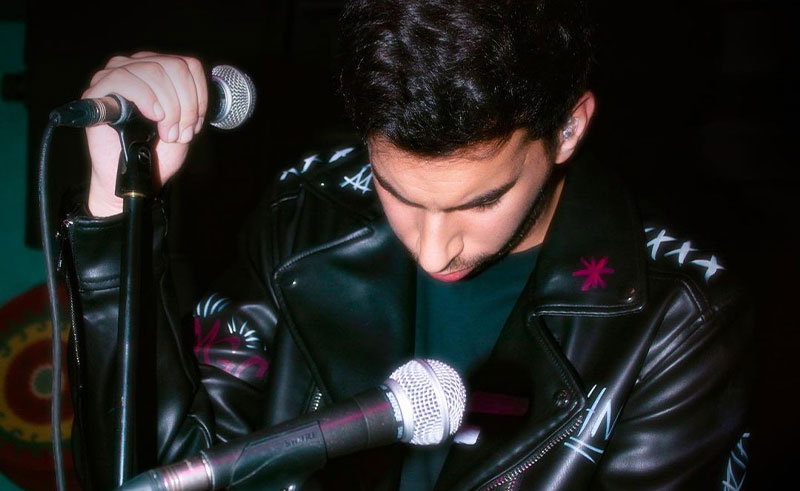 Paradoxically, the moment 'Selfish' started playing, the crowd gathered towards the singer which is ironic given the song-title’s name. CJC’s crowd united stronger than ever, already feeling that the night was reaching towards its unfortunate end. The passion and indulgence from all parties involved was palpable and you could tell that NOVO was proud of himself for being there and honestly there’s enough reason why given the quality of the performance.

“It was such a great feeling to release my first project, it’s something I always wanted to do and cross off bc that’s my first stress which is to deliver to something at a certain standard of quality and I feel like i’ve done that.

“The EP is a statement, a blueprint of who I am building. I don’t want ppl to listen to my track and feel like they’ve heard something similar before - and this EP essentially does that. It’s a message to the person I’m addressing, that I wrote it for and it’s a message to myself.  I didn’t have any expectation on how I wanted people to receive it, I just wanted them to understand me and appreciate the time and effort put in from all angles”.

NOVO kept on repeating how thankful he was for the audience’s participation when in reality we were the ones thankful of having him on stage. Yes, he may language his set and thoughts in English, but his Arab hospitality prevails as he left the crowd jaw dropped  because of the tunes but also because of how fast time flew by. 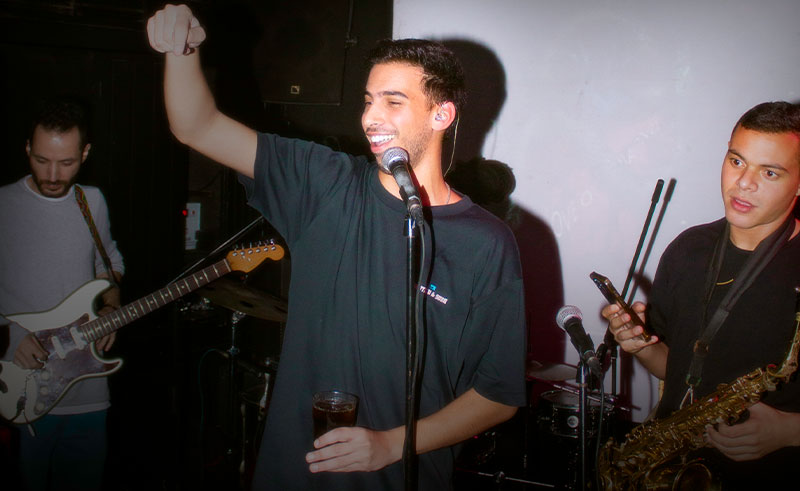 NOVO might sound like a name, and at a first sight it is, but it’s also a crew - a team of family members and friends that blend into one once the first note hits. Explosive, talented, daring, you name it - watch this man, his ticket to glory is about to get acknowledged. May this stand as a testimony of NOVO’s talent - to be able to look back on this piece in a decade from now and smirk at how I told you so.