Nothing sets the tone like an awe-inspiring entrance. This house in New Cairo's Katameya Dunes makes a dramatic first impression with its giant 13-metre, two-storey door. 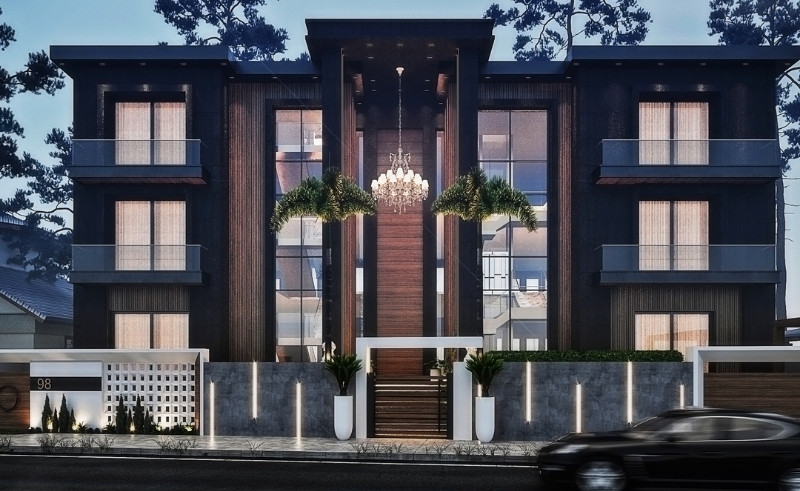 When Ahmed Hussein Designs was asked to create an unconventional exterior for a house in Katameya Dunes, New Cairo, he went above and beyond, delivering a facade that exudes mystery through its dark materials with a sense of luxury that is grounded by order and symmetry. Which, as it turned out, means creating a giant door 13 metres high with a crystal chandelier outside. Because to the acclaimed architect, who has been leaving his bespoke touch of luxury on the interior design industry, nothing is as detrimental in setting the tone and vibe of an interior as how it is entered. Here, the designer decided to make the entrance grand, with thresholds as high as the entire façade. Massive. Dramatic. And just a little intimidating.

“Entrances are the first impression you get of the design, they showcase what is to come inside,” Ahmed Hussein tells #SceneHome. He founded his practice in 2008 and has since delivered a slew of extravagant high-profile projects in Egypt and abroad. “For me, it is the main element. Not getting it right affects how the interior is perceived, regardless of how well designed it is.”

Clients are usually open for suggestions, according to Hussein, with a predisposition for certain styles. Taking pride in his ability to adapt his approach to fulfill a client’s vision, Hussein translates their input into visual brilliance. “They wanted something unconventional and dramatic,” Hussein says. And what can be more dramatic than a floor-to-ceiling, two-storey door? Imagine opening those massive doors yourself, unveiling the interior with all its might. Now imagine your guests standing outside and watching all that happen.

Emphasizing verticality, Hussein juxtaposed the entrance with palm trees. “They are indispensable, providing symmetry and showcasing the facade’s scale,” he says. “The bigger the scale, the stronger the impression.” They weren't alone in providing a symmetrical aesthetic, as they were accompanied with dogs made out of marble that add orderliness and a sense of provocative luxury as you walk up to the door. “The two marble dog statues are in an alerted position, giving off the mood the client wanted,” Hussein says. As we said. Just a little intimidating.

When it comes to façades, lighting is key, as it could upgrade the visuals or work against them. He used dark grey colours and wood to provide mysterious splendour to the entrance. “The lighting used was just enough to indicate the materials’ dark palette.”

To ensure that the facade has a long life-cycle, Hussein opted for aluminum cladding with a wooden finish. “Instead of using paint, which doesn’t age well, I prefer materials that have longevity and weather gracefully,” Hussein explains.

Finally, the most outlandish of features. A classic crystal chandelier hanging from the façade. Why? To confirm the dramatic statement, like a shiny full stop. “The client didn’t want a facade that is completely modern,” Hussein explains. “So I thought, why don’t we put a classic chandelier outside. Intensifying the luxurious look and conveying the classical vibe of the interior by bringing it, well, outside.” Teasing us and anyone who passes by this facade with the house’s interior design which is yet to be completed, but if you’ve been following the firm’s work, you’ll know that it will certainly be just as beautiful, just as calculated, and just as dramatic.