Everything about this Alexandrian home exudes classic style, from the lines and lanterns to the coffered ceiling. Take classical outlines and abstract them enough until they have a sleek modern look, without losing their orderliness, and then you’ve arrived at neoclassical design, or at least a contemporary form of the style. That’s what the architects at Design Sector, an Alexandria-based design studio, created for the owner of this three-storey residence in Alexandria’s countryside who wanted to renovate his home to remind him of the city’s multicultural heritage. As a result, the façade is grand, the ceilings are coffered and the landscaping is simple yet lush.

“Alexandria hosts many heritage buildings that linger and stick with its people. Sp, homeowners usually ask us for styles that are inspired from its built environment,” Muhammad Bargal, founder of Design Sector, tells SceneHome. “Alexandrians feel like they belong when they are surrounded with aesthetics that remind them of the city’s history.”

Bargal founded the studio in 2015 along with Hazem Yousef, and led it through a plethora of real estate developers in Alexandria and beyond. They also take on social initiatives such as the Alex Design Community, which links suppliers within the coastal city and brings designers together in a collective.

In this renovated home, their work began with reorienting the entrance (which was on the side) and bringing it to the middle to confirm the importance of the façade. “The homeowner had this villa for quite some time but never lived in it,” Bargal says. “He wanted to give it a renovation to live in an atmosphere that looks classical but has a contemporary spirit.”

Keen on leaving a strong impression when hosting guests, the owner was swept away with the proposed neoclassical design. It made the main façade the full focus of the residence, with massive masses, coffered ceilings in the terrace that overlooks the lush landscaping, and openings that let as much daylight as possible indoors.

Moulds were used in a variety of ways to create the lines that decorate the surface, and some of them ensured that there was enough room to host hidden lights that beam unto one another and highlight the design in all its glory. From the ground up, the main wooden entrance door was split into two slender windows on the second mass and then recessed to host tidy detailing. “While the grand façade is meant to garner the most attention, we still had to align its proportions to look well with the landscape,” Bargal explains.

Materials were used to distinguish between the different functions that are hosted in the yard. “Marble was used on the staircase and granite in the parking area to withstand the load,” Bargal says.

Furniture was picked to supplement the overall theme, without being too striking and distracting from the overall visuals.

“The landscaping teetered towards simplicity because we didn’t want things to look overcrowded,” Bargal adds. 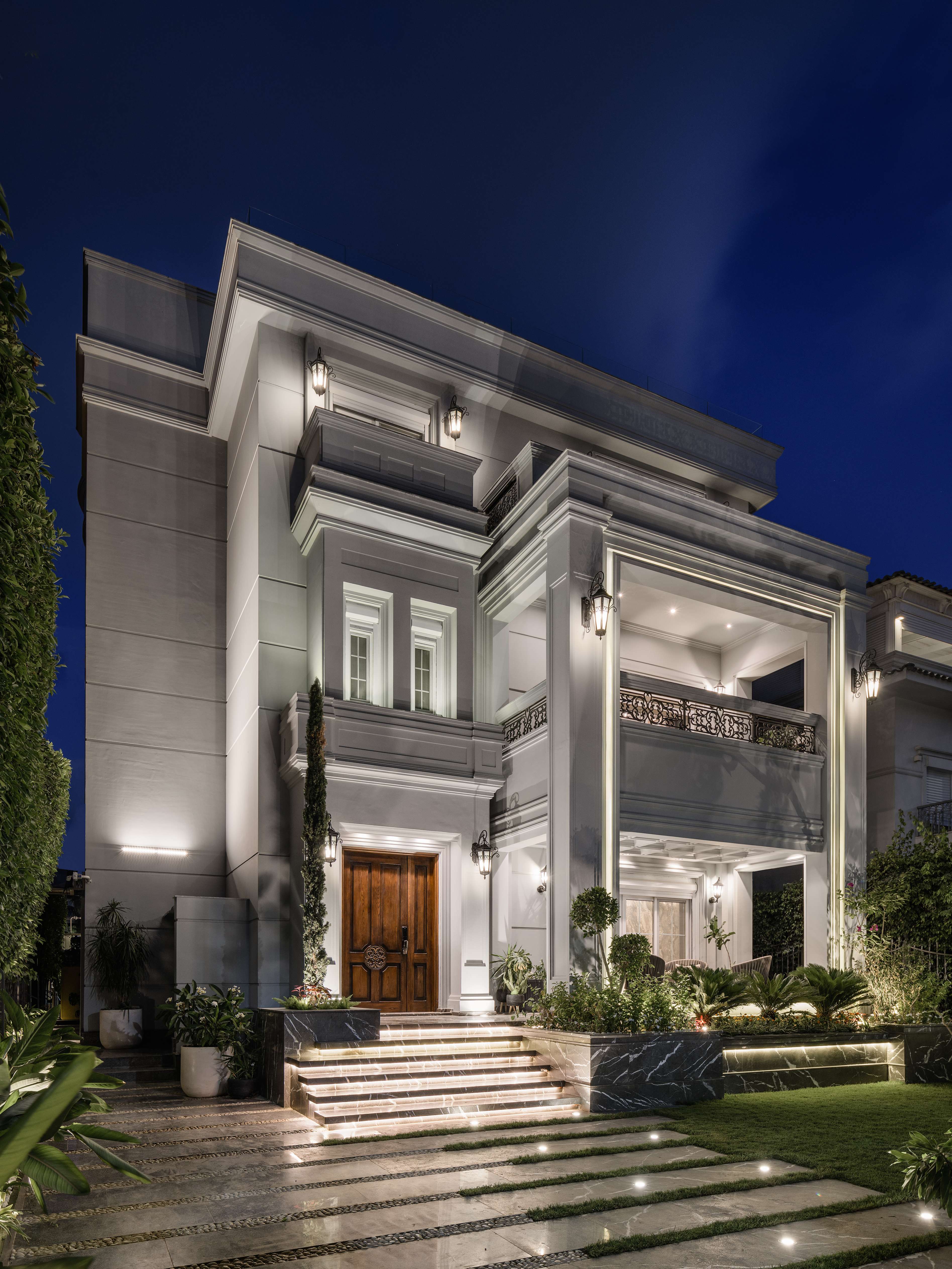 This design was all about choosing certain elements and characteristics and then knowing how to assign them to and around the façade. It quickly started gaining attraction from neighbouring homeowners who are eyeing a similar renovation. Having different masses protruding the body gives the façade its modern look, and the orderliness, along with the elements, ground it within a classical theme. Despite the homeowner being compelled to move to newer developments on the coastal countryside, the composed design made him stay, allowing him to live in a harmonious residence.

With an approach that many would think is too much, this interior designer was [...] Step Into This Stylish Hosting Space by Living In Interiors

Having a fun basement to host friends over for a party or movie night is on [...] Telling spaces apart through clever patterns, this New Cairo home was designed with [...]

For 114 years this palace helped define the Heliopolis neighbourhood. Now it has [...]
RELATED ARTICLES The marathon is partnering with the Charity Hospital for Children with Cancer in [...] 8 Cool Spots to Have Mouthwatering Seafood in Alexandria

These fresh-out-the-sea spots are a must-visit for a proper tour of Alexandria. [...]
Week Month Year