On the surface, it's a simple graduation project. When listened to, this compilation brings together some of Egypt's best acoustic artists for an easy-going musical cruise... 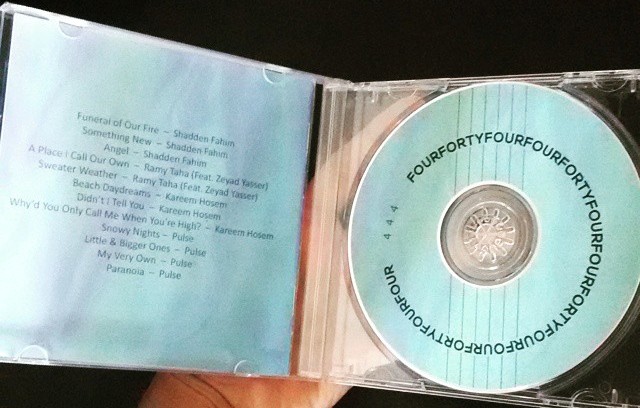 There is arguably no better music to listen or play on the beach than smooth acoustic Folk Rock. Looking to capture these intimate sounds on an album is producer Nazli Reda, who has recently released an album entitled 444, showcasing four acoustic artists in 44 minutes of music.

444 was created as Reda graduation project at AUC’s Music Technology department. Passionate about the soothing sounds of acoustic guitars, Reda set out to find four artists serenading the musical community to produce. The intention of the album is to counter the rise of digital electronic music by demonstrating the moving purity of acoustic waves. Simple and polished, this album opens with the first of the three Shadden Fahim tracks that appear on the album including a Jack Johnson cover entitled Angel. The opener track is entitled Funeral Of Our Fire, which quickly establishes the tone of the album.

Following Fahim’s efforts is Ramy Taha featuring Zeyad Yasser who contributes two tracks including one of which is a great rendition of The Neighbourhood’s track Sweater Weather. Following their contributions is rising acoustic star Kareem Hosem, who brings his unique vocals into the mix on three tracks including a simplified cover of Arctic Monkeys' Why’d You Only Call Me When You’re High? Hosem's ability to hit all the right vocal notes is engaging and is perfectly paired with the other artists featured on the album. Closing off the album are four serene contributions is the band Pulse. At times Pulse shifts their guitar from acoustic to electric but manages cleverly not to disrupt the acoustic flow of the album as the album closes much like it began pleasantly polished.

Nazli Reda’s 444 may have just been a graduation project, but it effectively showcases her skill of producing and pairing artist together. The album starts and ends much like a smooth ride, floating around on a pleasure craft on a still Nile. At no point does the water get choppy, and the 44-minute cruise passes peacefully leaving the listener refreshed and excited that there are talented Egyptian artists that can stand on par with globally recognised acoustic Rock stars.