Performing in Jordan tonight as part of the annual Dum Tak Festival, Salalem are picking up the proverbial pace. We catch up with lead singer Jimi to find out how they've made it so far and get the exclusive on a new collaboration... 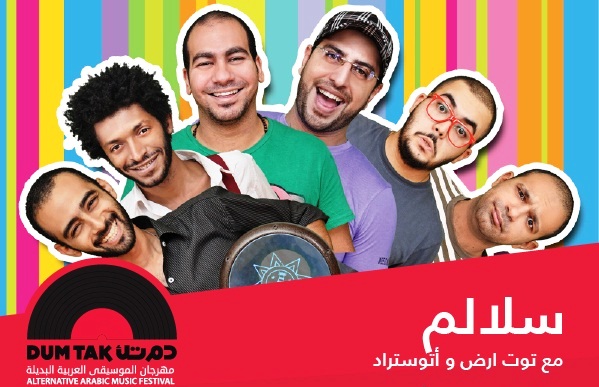 Having been around Egypt’s music scene for a while now, we’ve met a lot of egos, especially when it comes to the lead singer. Jimi, we can safely say, is not one of them. He exudes this friendly, jovial vibe and it comes out in his performances, whether it’s belting out sarcastic sociopolitical lyrics as lead vocalist in one of the country’s biggest underground bands, Salalem, or getting a crowd to their feet at the head of his other project, Buzzz. We sat down with him prior to Salalem’s performance at Cairo Jazz Club’s El Fusion night, last week and before he set off to Jordan where Salalem will be playing tonight at the Dum Tak Festival, to talk about his bands, the future of Egyptian music and the life of a musician…

So what’s the creative process when you’re coming up with songs for Salalem?

Well usually the lyrics come first and then we play with the music until it works. That’s mostly what happens but sometimes things happen in a different way.

Have you started to think about approaching an audience outside of the Middle East?

Do you think your music appeals to those who don’t speak Arabic ?

It does! We played a lot of event in Egypt where there were only foreigners. It’s the music that gets them moving, and even if the music is not upbeat and dance-y, other bands like Masar Egbari, for example, can still convey that different mood through their music, even if the audience doesn’t understand the lyrics.

Have you played abroad yet?

Only in Jordan. We’re playing there at the Dum Tak Festival on the 28th May, which will be the second time we’ll be performing in Amman.

It’s beautiful! It’s growing really fast though it’s a really small country so the musicians have less competition, because the good bands are very few.

How does it compare to Egypt’s music scene?

If you compare you’ll find that there’s a lot more kick-ass technical musicians in Egypt than in Jordan. When I stayed there for two weeks, I realised that musicians over there don’t care much about how technically good you are, they care more about the performance and how the music makes you feel.

It’s much better! Because when you think about music in a similar way as the audience, it’s far less complicated.

What do you think about the increase of Egyptian bands getting gigs abroad recently?

Are you jealous that you’re not part of Coke Studio?

No, it’s just the fact that…

Haha, it’s actually good for them, we do advertising sometimes too.

Where did you record it?

We recorded in three different studios:  ART, one of the biggest studios in town, Salvation Link in Heliopolis and another called Sam Design. We need the money so we need to… not sell out, but work. We don’t do any commercial projects where they want to interfere with the music, unless we agree with the changes or adjustments being suggested.

That’s where the problem comes in, when they try to change your music…

Exactly. You can’t ask me to play something the way you want it. We’re a band, we have our own music and our own style; you pay us money for that. We do all the hard work. Sometimes companies want to change our lyrics, and sometimes we do, but only if we think it works for us. At the end of the day, we aren’t selling out, we’re just selling our music for a large amount of money.

Can we buy it off you for a million pounds, change all the lyrics to CairoScene and own the rights to the song forever, meaning you can never play it again?

I’d have to discuss with the guys.

When have you had to change your lyrics for a commercial before?

Who else do you play with apart from Salalem?

I’m in a cover band called Buzzz. We do lots of hit songs from the 90s and the 80s. Corporate gigs, weddings and everything. That’s for the money.

Do you ever get inspiration to do something completely different with Salalem or do you worry that you have to make the same type of music that you already know people like?

You can’t keep doing the same kind of music throughout your career because you develop, your audience develops, and a new audience comes along. We live on the planet and the planet is changing. All our songs until this moment are totally different, but they still have the Salalem spirit.

Do you ever pressure to go more electronic?

We tried that with Ma3leshi but the problem with that is that the track sounds one way and when you do it live it’s totally different.  But we’re definitely going to try more. We were  actually working  on something with NEOBYRD. Do you want to hear something exclusive?

Sure, we love hearing exclusive shit…

We just recorded a song yesterday with Jordanian band Autostrad. It was a spur of the moment thing. We were picking up Hamza, our guitarist, from the airport, and we had Yazan from Autostrad with us. Yazan had this tune in his head and started singing it and we were like, let’s go record this now! We made a few calls and found a studio slot, and recorded it straight away.