$$$TAG$$$ is at it again, this time with a cassette-only release! Yes, you heard that right, cassette. How very nineties. 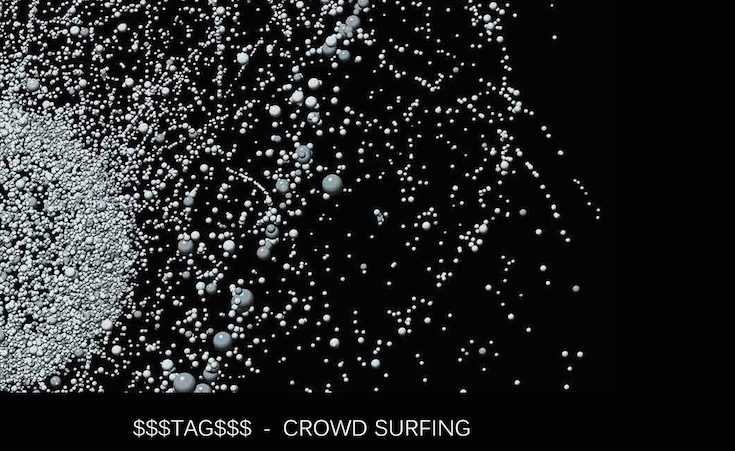 Opal Tapes is one of the freshest Indie music labels in the world, and is one of the UK's handful that continues to publish media on cassette. It releases different Electronic styles - mainly House and Techno with varying experiments on the norm - to challenge what would be accepted on the dance floor by the masses. $$$TAG$$$ - a.k.a Tag Money - is an Egyptian solo producer, one part of the KIK collective, and part owner of Vent. Prior to $$$TAG$$$'s EP, Crowd Surfing, Opal Tapes has seen releases by Sciahri, CAO, Patricia, and many more. Crowd Surfing is $$$TAG$$$’s attempt at the ongoing franchise, bringing in a discomforting sense of hominess.

The first track, Stuck In The Same Spot, is exactly that - $$$TAG$$$ stuck in the same spot and being beautifully loud about it, if that ever was a thing. The track is effortlessly minimal and yet it’s not; the variant changes in sound, a result of some sound layering and very dramatic panning, engage you beyond what a minimal track usually would. It remains refined, but is completely filthy at the same time.

It is an issue to be debated whether $$$TAG$$$ should be allowed to create music and freely subject the masses to it. The artist's sound possesses a certain quality and originality that can neutralise the listener, rendering him helpless in stopping the attacks that $$$TAG$$$ might send out to mop up what was left alive by the first track. The second track, A Violent Exchange On Truth Serum, is every dad’s nightmare; the thought of their kids raving to something so raw, so lunatic, so punk, would make any parent want to wrap up their firstborns in their headphones and make a run for the hills. That hill won’t hide you for long, though; the first drop, if turned up just right, would level all surrounding hills, foothills, cliffs, canyons, and any other geographic markings of this here area. The track is a tumultuous dance floor beguiling record if ever one was played; truly a violent exchange.The third track develops a different approach, as $$$TAG$$$ takes to Star Gazing out in the open. He makes it clear that stars, planets, spaceships, and other such things are involved. The star pads are clearly part of a form of communication similar to Morse code that the artist uses to contact his home planet; so far, he is succeeding in the mission he was sent on - to infiltrate underground dance music and disrupt the status quo.

Lonely Crowd Surfing Arab sets another mood; the track starts with a simple beat, a minimal build up. As one sound takes over, another is forfeited. The snare drum brings in a militant vibe and doesn’t falter on its 4x4 frame, alternating between breakdowns and bass drops.

The fifth track, During The Eclipse, has a rather stagnant beat that refuses to move forward, revolving around the same idea but without the trapped-in-limbo, manic-depressive feeling that was in some of the previous tracks. Instead, it brings on a very terrifying vision of what the world’s dance floors really look like. As opposed to the teenage beauties, and muscular fellas dressed in designer rags that exist in our utopian minds, on $$$TAG$$$’s dance floors, most of the women are fat, middle-aged, factory meat packers, and the guys are all severely malnourished chain smokers, dressed in nothing but black leather pants and leather vests.

The last track proves that $$$TAG$$$ belongs to a distant world; not only did he find the void, he was able to travel to its centre, find out that it is soft, and travel back unharmed. The Soft Centre Of The Void is a pretty damn good ending track; the pulsating bass line pounds what’s left of your ears and brains to a gooey mush, ensuring your incompetence at anything else you do for the rest of your expected life. An eerie synth meanders towards the end as if trying to say, “Nothing will ever be the same…”

Check out $$$TAG$$$ on Facebook here, and you can order the album on Bandcamp; you get the cassette and a digital copy.