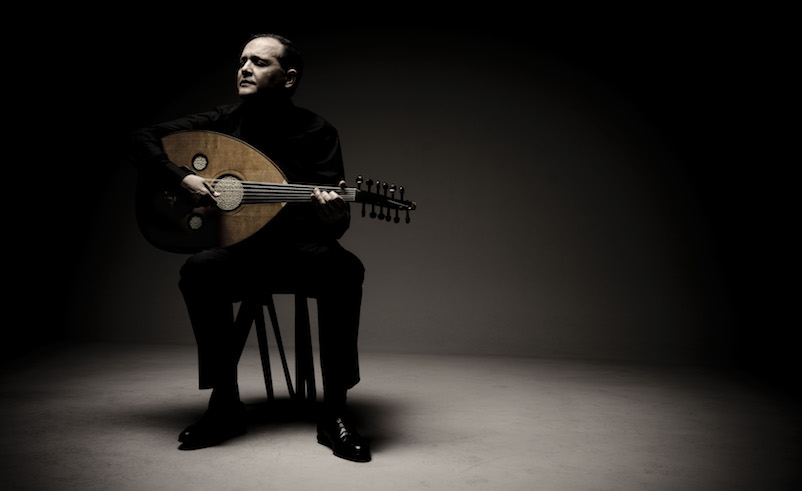 In conversation as in music, much impact lies not in what is said, but rather in what is not said, in the “air” that lives between statements. Herein exists the most powerful emotiveness, in the sudden end of a sustain that can leave you both refreshed and gasping. Subtlety is a sophisticated art to master, requiring the ability to not simply put forth energy, but to harness it and control the level of the burn. Blue Maqams, Anouar Brahem’s latest album, owns subtlety. It is a conversation that, though you might not immediately be captivated by, will soon have you gripped in its mysterious trajectory.

Blue Maqams, Brahem’s newest album out on ECM Records, came about organically, its seed lying in a renewed desire for Anouar Brahem to once again marry the sound of his oud with piano, and this time attempt to merge this delicacy with a double bass and a jazz rhythm section. Upon setting out to find the correct musicians, he at once thought of bassist Dave Holland, with whom he collaborated on his album Thimar, 20 years prior. For the sound that Brahem was pursuing, he would require a drummer with a very particular acumen and sensitivity; this would be Jack DeJohnette, who in the past has frequently collaborated with Holland, even on a project with Miles Davis. The final piece of the puzzle would be the pianist. In a bid to break habits and push himself, Brahem decided to not use his pianist of 32 years, François Couturier, but instead strike out into new territory. This search led him to Django Bates, who lends a flawless finesse and creativity to the project.

Brahem, born in Halfaouine, Tunisia, began studying oud at ten years old, dedicating himself to the discipline of classical Arab music under the tutelage of master Ali Sriti. Having always been influenced by Indian, Turkish and Balkan music, as a teenager in the 70’s Brahem became passionate about jazz. This interest would shape his career, giving him the unique edge that he has over many artists. He found jazz at once both completely foreign, and in some ways akin to Arab music, specifically in the space of both to explore emotions deeply.  In jazz though, Brahem found an “extraordinary field for experimental possibilities and at the same time, fruitful ground for intermixing and cross-breeding” as he states in the liner notes. “It was also a language naturally open onto different cultures and I felt I could find my place there.” The merging of oriental music with jazz has never been something that is easily pulled off, certainly without eliciting a certain amount of kitschness or casting it under the horrid word “fusion.” Somehow, Brahem and co. have managed to fashion an album that does not feel as if it easily falls into any of these categories. It feels creative and original, but not dramatically, and most importantly it does not feel forced or inauthentic.Blue Maqams exudes an intimacy that brings you into the room with the musicians, especially in tracks such as “Bahia,” in which Brahem naturally sings along with his oud. It is an album that is both extremely rewarding for deep listening, or perfect for ethereal and contemplative background texture, as in the Erik Satie-esque “La Passante.” It is easy to envision that Brahem has directed and scored films. With the exception of Bom Dia Rio and Bahia, which were composed in 1990, all of Blue Maqams was composed between 2011 and 2017, and recorded in New York in 2017. This union of Brahem and his three collaborators has resulted in an album that feels like the garden inside of a riad; it is organic and alive, but impeccably and precisely cultivated, always staying within its own structured walls. Each musician contributes exactly enough to compliment the others, maintaining subdued but tasteful and surging forth in individuality at precise and controlled moments. It is subtlety at its most exquisite – it does, in fact, feel blue.