Exclusive: Booka Shade on Making Beats Outside the Box

We're just hours away from the hottest electronic music festival to hit our country, and as Blurrfest begins to be the only thing that occupies our minds, we get the rare chance to talk to Booka Shade about their upcoming gig... 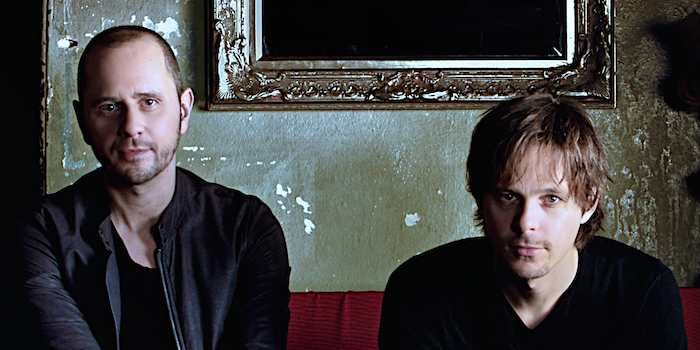 We're so excited for Blurrfest, we're literally running out of synonyms to describe the feeling of exhilaration we get every time someone mentions the event. Our tickets are booked and our accommodation is all planned; the only thing left is you and us on the dance floor getting down. Ahead of Blurrfest, we have the rare and exclusive chance to have a chat with Berlin-based dance music legends, Booka Shade, about their past, present and the future, and how they almost split up.

As a duo, you've been on the scene for a while. How are things different now than when you first got together?

Arno: When we first started touring 10 years ago, every show was new and exciting because we traveled the world for the first time. We have a little bit more routine nowadays and know many international venues (and airports!) practically by heart. But still, every time it's a challenge to play the best possible gig and make the fans happy. It's kind of easy to impress an audience once, but for a long career you have to be on top of the game every night. Traveling is exhausting, but the latest when we go on stage, the energy is there. We look after our health and fitness much more than we used to and excessive after parties have become rare.

Over the years, we have 'survived' a lot of musical styles, too. Minimal, Electro House, Tech House, Deep House...whatever. You can´t put booka shade into a box, which again is good for a long career. The driving force for us still is the power of a live show (yes, you get addicted to the feeling) and the moment when you know you have written a good song.

You’ve won a lot of awards but screw that. What were some of the other things that kept you going at moments when you wanted to quit?

Walter: Awards are great, being high up in the charts is great, but it´s the energy of the live audience and the feedback of fans we meet which is the real reward. When they tell us that our music plays an important role in their lives, it means a lot to us, it makes us very proud. Some tell us it was the music they've been listening to when they first went out to clubs, or when they fell in love. Some producers even say that our music was an inspiration to get into the music business.

One of the biggest compliments, though, was when a member of Kraftwerk told us that they've been listening to our album Movements in their studio for sound reference - now THAT is flattering!

So what does your live setup consist of now?  Do you find yourself adding more gear, or cutting down, or just replacing stuff?

Arno: In principal, actually not much has changed since the days when we were 16! On stage, Walter plays keyboards and I play the drums. These are the two basic elements of our live show since day one. Of course, over the years, the setup has seen many changes; for quite some time we explored the more 'rocky' side of our live sound, and at the moment we return to our clubby roots.

Since this summer, we've been touring with a live setup which gives us more flexibility than ever before; it's even more LIVE than ever before. We've just returned from a two week USA tour which was a great success, so you can expect to see us in a good mood, with high energy!

Tell us a little about Yaruba; when and why did you decide to start that? And what’s the sound that defines Yaruba?

Walter: We're proud to be able to look back on a 10 year career already (and that's without the Booka Shade 12"es in the mid 90's). Over the years, we have created a trademark sound, which is quite difficult to achieve in instrumental music. But it can be a burden also.

Our recent album Eve (released in late 2013) was relatively pop-py, so we felt that it was time to create an offspring which can focus on the club roots, and features what we call the darker side of Booka Shade.

Since Yaruba, we have quite recently released a new Booka Shade single called Wildest Thing, and it looks like in the future we'll continue both projects, Booka Shade and Yaruba.

You guys have worked together for such a long time; what is your secret for synergy and harmony, and not killing each other? How do you compliment one another sonically?

Arno: We look back on a successful 30 year partnership; how crazy is that? We met as kids in a school band. We had a separate careers as producers long before we became Booka Shade. Of course there are tensions and discussions every now and then, there have been hard fights and during the production of Eve we almost came to the point that we split up.  But thankfully we reached the other side of this dark tunnel, and realised that the discussions and tension can make us stronger. They are important in a creative relationship. Also it's crucial to have respect for each other and give the other one the freedom he needs.

Walter always starts the production of a new song in his studio, After that we meet and discuss and continue together or I record additional instruments in my studio and send them back to Walter. We throw ideas back and forth, and sometimes it takes a couple of months until a song is ready for release.

Have you ever been asked to come play in Egypt before?

Walter: We had offers to come to Egypt many times but either it never worked out with the tour schedule or the political situation didn't allow it, so we're more than happy that it works out now. We're very curious to find out more about Egypt, and look forward to seeing you all! Hopefully we meet a lot of new friends. See you very soon...