In this installment of our series of interviews with young, up-and-coming musicians, we chat with Amr El-Alamy, AKA Cellar Door, about his ambient beats... 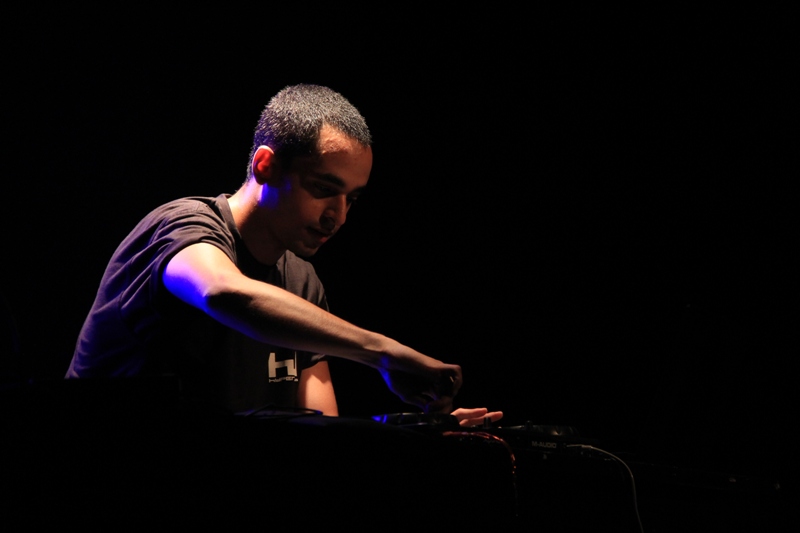 Generally speaking, Electronic producers who don’t make music with a standard 4/4 beat in Egypt get ignored. And it’s a shame because, when you have an absolute infinite number of sounds and rhythms to work off, with a bit of creativity and soul, the outcome can transcend emotion much more fluidly, not to mention make you think. Yes, music without words can be as intelligent as an intricately constructed poem. One of the most intelligent producers coming out of Egypt today is 22-year-old Amr El-Alamy, otherwise known as Cellar Door. At the forefront of Egypt’s alternative Electronic scene, the Ambient and Experimental producer, as his Facebook page says, creates “abstract shapes and forms made in some basement.”  And those shapes are usually hauntingly beautiful and wrought with dark and often danceable beats. He’s slowly been making a name for himself performing at venues like 100Copies and Cairo Jazz Club, and is regularly lauded as the hidden gem between those in the know. We catch up with Cellar Door for another Boys & Their Noise Q and A….

When and how did you get into producing?

I got into making music late 2009. I started making Hip-Hop beats (real shitty ones) just for fun then I switched to Dance music in 2011.

What do you use to produce and what's your live set up?

I use both FL Studio and Ableton for producing and performing live, next to an MPD32.

There's not much, if any, of a scene for Experimental and Embient music here in Egypt. Do you ever find yourself swayed to make music that is more popular?

I've tried to make mainstream music before (with another alias or two) and that didn't work out, I just hate the whole work that comes with it. I think in mainstream music what matters most is numbers, it's all about quantity.

Do you have a favourite technique to use when producing?

I don't have a regular workflow, if that's what you mean, but I love sampling. I also use loads of time-stretching techniques: it's so much fun to experiment with it. You can, for example, turn a very basic clap sample into the most complex background noise ever.

Pearson Sound, Tessela, 2562, Darling Farah and there's this Italian guy I just stumbled upon on SoundCloud  called OObe. He makes the freakiest Witch House ever, or whatever bloggers call it these days. I also like the whole Night Slugs and Fade to Mind collectives.

The KIK collective is in my number one spot, they're fucking awesome. El Manzouma (including their individual member's projects as well), Go Save The Hostages, the upcoming Techno Nazi, Mostafa Onsy, this really talented dude called TMO___, this anonymous producer called Blufrank and the great Maurice Louca,

Where have you gigged so far?

I've only performed in Egypt so far. The venues I really liked were Rawabet, 100Copies and CJC. I also played a gig in Alexandria at the French Institute which was surprisingly amazing; such a great crowd.

Where did you get the name Cellar Door?

Probably the movie Donnie Darko. The scene after Drew Barrymore was fired, the phrase "Cellar Door" was written on the board behind her. I suck at coming up with names but this just made sense to me at the time.

Do you play any instruments?

No, none of my family members or relatives are musicians so I wasn't exposed to those options earlier and right now I'm trying to focus on improving my sound electronically.

They didn't understand at first but they're fine with it now that they know how important it is to me.

Reading, and if I'm not making music then I'm listening to it or digging for some rare shitty quality mp3s online.

What are the obstacles you encounter as an emerging artist in Egypt?

I believe the biggest common problem for most alternative or underground music artists are the crowd's preferences. Most Egyptians were raised listening to some of the cheesiest Arabic Pop, so you can't expect them all of a sudden to listen to most of this stuff and that basically leads to all of the other problems we encounter.

It's getting there, there are loads of amazingly talented artists out there right now, covering a lot of genres.

Will you be releasing an EP or album any time soon?

I’ve been working on a debut EP, hopefully it will be out early 2014.

What advice would you give to Electronic music producers just starting out?

Be original and do your homework: you can find everything you need online.

Where do you see yourself in five years?
It's hard to tell with all the mess that's been going on but hopefully I will have a couple of LPs under my belt and I will be performing them live to some of the finest European party-goers.