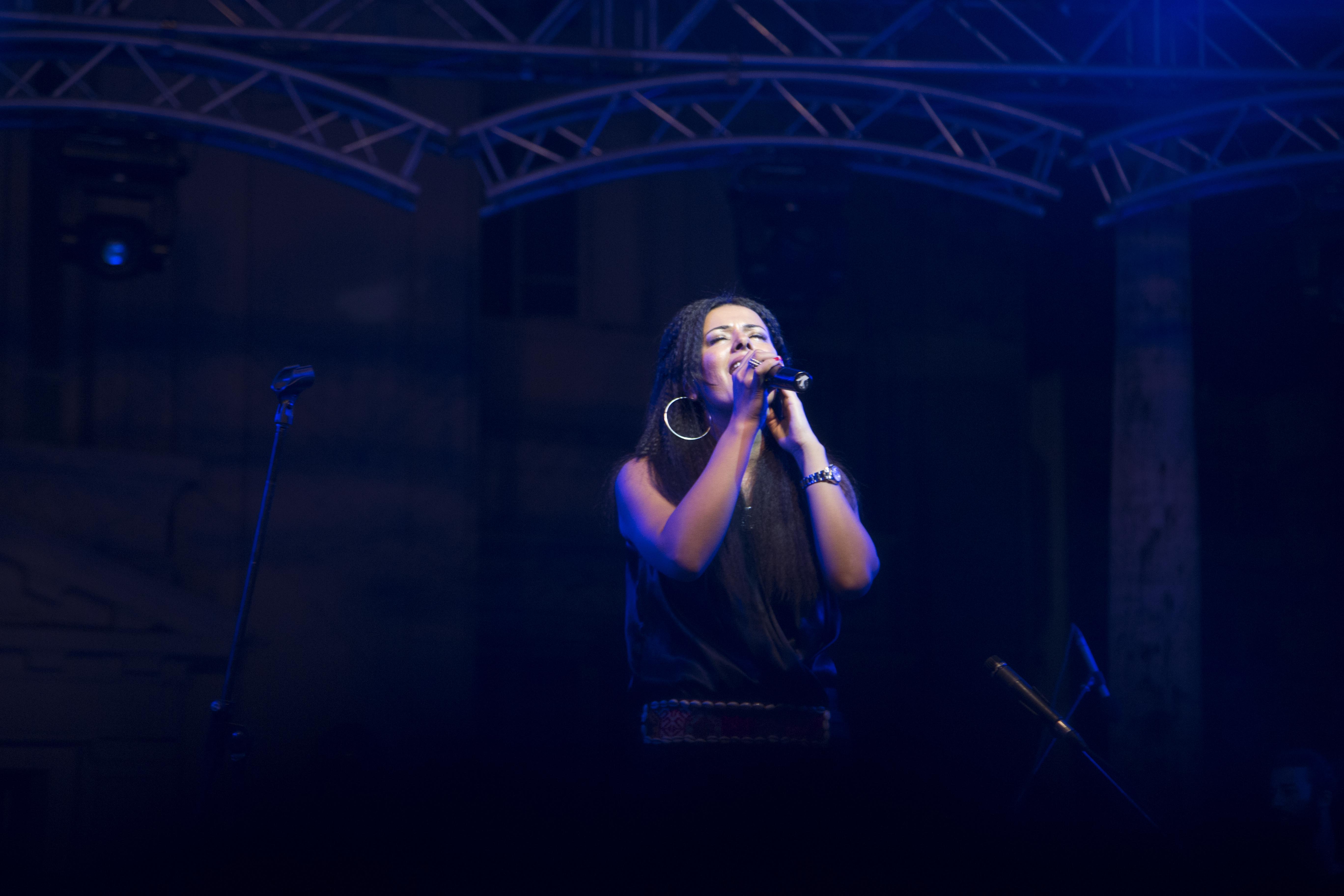 The GrEEKcampus at the AUC has witnessed a great music release by the 27-year-old Egyptian singer and songwriter Dina El-Wedidi of her first solo album Tedawar W’tergaa (Turning Back).

El-Wedidi has an ability to turn what’s traditional into something fashionable and bring the outdated back into the spotlight. She sent a chill up the spines of all her fans when she kicked the concert off with the single Sokoun (Stillness) written by Omar Mostafa. In this powerful vocal/word composition, El-Wedidi and her band dynamically built the song’s live aesthetic from a quasi-subtle a cappella to full-on power band instrumentation.

As the audiences cheered, “We miss you” and others “We love you Dina,” El-Wedidi played El Haram (Sin), a single, which has greatly affected El-Wedidi’s following, written by Montasser Hegazi. Being one of the oldest and most famous compositions on the album, the song has the power to defy the concept of what is out-of-date. You could hear the crowd singing along “the sin is not for me to sing” as the artist moved through the song's verses. The concert was packed with fans, coming from all over Egypt, who stood outside of the GrEEK Campus for over two hours waiting for its doors to open, and then for their star to take the stage.

The album is a conceptual representation of how, El-Wedidi believes, Egyptian folklore should sound nowadays which has resulted in her full ability to compose Tedawar W’tergaa. In collaboration with various poets, writers and lyricists coming from all walks of life from Egypt, she draws the past, current, and future state of Egypt, being highly enthused by the people on the street, those whom she meets as well as the passersby. All these experiences being a prime inspiration of this album gave an apparent depth to her compositions.

Tedawar W’tergaa contains 10 remarkably solid original compositions, and El Sira, a folklore song rearranged and recomposed by Nacy Mounir; all songs appearing on this album are ranging from new productions, to some older songs, which El-Wedidi has been composing for over six years. In the album, she collaborated with series of musicians and instrumentalists from Egypt, USA, and Brazil. The album is the result of close cooperation between singer/songwriter El Wedidi and the Egyptian musician and arranger Nancy Mounir who has coproduced several tracks on this record (also featured on Violin, Viola, and Kawala), with the American producer Miles Jay also featured on double bass, lyra and bouzoki on this record. It was recorded in Cairo and mixed in Oslo by Martin Abrahamsen. In the album, El-Wedidi collaborates with a number of Egyptian musicians, among them: Wael el Sayed on accordion, Muhammad Ra'fat on drums, Nader El Shaer on kawala, Seka on electric bass, Mohamed Adel on electric guitar and Mounir Maher on acoustic guitars. For her live performances, El-Wedidi has shared the stage with three musicians to replicate the recording of the album in the live concert including: Azima on percussions, Mohamed Sami on violin and viola, and Jan Abadear on cello.

El-Wedidi has a remarkable ability to understand that the music surrounding her is about restraint not release; her stage presence and communication with other musicians she works with shows her great ability to join the stage with a very different, complex group of musicians. Mazaaher, for example, is an Egyptian traditional singing Zaar troupe that consists of two women. On stage, her collaboration with Mazaaher was quite interesting. Collectively, they performed the song El Sira (Mention) and managed to flawlessly integrate Zaar vocal techniques into vocal expressions, with a powerful music of traditional beats on the Douf and a set of percussive instruments played by El-Wedidi’s band. El-Wedidi wants to preserve the musical performance traditions of Egyptian women and it is this ambition that has brought her to work with the Zaar troupe. Their cooperation comes to surface in the single: Dawayer (Circles). Performing Dawayer seemed to be a whole different level of stage experience for El-Wedidi and her fans. The very distinctive sound, spirit and energy of these three women put the audience in a state of trance.

With Tedawar W’tergaa, El-Wedidi took a lot of risks with regards to music composition, words and sound. Living in a country that produces a whole lot of same sounding Techno-polished 90s commercial Arabic Pop music and, on the other end of the spectrum, with what is popularly referred to as an ‘underground’ music scene mainly consisting of musicians fighting for their right to coexist with the mainstream, this release has definitely become a new variation to what is available nowadays out in the Egyptian music market.

Through her album, El-Wedidi proves that ‘folklore’ does not only represent the social stereotypes the word conjures up, but it is a musical heritage meeting a generation of musicians from the 21st century. With Tedawar W’tergaa, El-Wedidi emphasizes the concept of time, movement, loss and gain. As such, her album becomes an infinite recreation and a timeless re-representation of Egyptian musical values, words, voice and sound. Her aim is to “improve” traditional music from Egypt as she mentioned in an interview for The Rolex Mentor and Protégé Arts Initiative, taking it to new frontiers. It’s a constant change she speaks of, which changed her personal dynamics with regards to her music, consequently creating rare narrative pivots found in her songs. Yohadethoni El Shagar (Trees Address Me), the third song she sang live at the album release concert, was in classical Arabic. In it she directly speaks about those changes, dreams, moments, hopes and even stillness. As such, the album could to some extent shape the perception of ‘new folk’ in Egypt as well as encourage other musicians in the scene to investigate into new forms of music composition and creation.