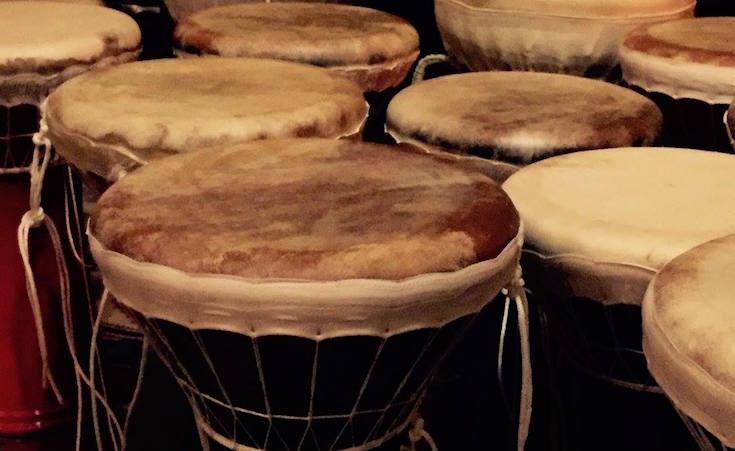 Renowned percussionist-turned-instrument-maker Akram Al Sharif has been busy for the past year developing and improving a new breed of tablas. The percussion instrument-maker set out to create an improved Darbuka with all the bona fide elements that maintain its authentic feel.

This new generation of the instrument tackles a time-consuming and patience-testing issue that ceramic tabla instrumentalists face; warming up. The tabla requires heat for the skin to stretch and give its deep doms and sharp taks. This step is skipped in the Tablona by using a special balloon placed under the skin to stretch it instantly.

“The whole idea behind the Tablona is to make the instrument concert ready on the spot. Before the Tablona, regular tablas were either tuned by leaving them in the sun for a small period of time, using a small lamp that is placed inside the tabla, or placing them next to a stove or a heater," Akram explains. "Basically, you need to heat the skin and that would stretch it. The Tablona is stretched instantly and you can go on stage at that same moment with no preparation time.”As you might have guessed by now, the cleverly named Darbuka instrument gets its name from combining the words tabla and balloon or rather ballona in Egyptian Arabic. “The Tablona took almost a full year to develop. There were many issues concerning inflating and deflating the Tablona, the design of the clay mould took quite a while too. In addition to finding the right angle and the correct type of ropes and how to stretch it, it definitely took a lot of experimentation and lots of trial and error,” the innovator says of the process and time frame of coming up with such a creation.

The Tablona is now available for orders online through Akram’s website and are available to try only in El Gouna - where he resides - so far, but he aims to have it in music shops around Cairo very soon.

And the best part about this revolutionary instrument is that it doesn't require much experience to master it, unlike regular tablas. “Tablona functions exactly like a regular Tabla, it is a professional, very high-quality instrument, and a lot of beginners would like to have a professional good-sounding instrument. I also produce simple regular tablas that are professional grade, which might suit a number of beginners,” Akram explains.Finally, we had to ask Al Sharif why he was set on creating the Tablona, aside from tackling the warm up issue. “The tabla was never further developed in thousands of years. This is the first time this instrument is modified or adjusted by any means. The only change that happened is that someone made an aluminium mould and created the regular metal tabla that you see everywhere," he says. "Although clay tablas sound so much better than metal ones, the functionality of the latter category took over. There is a mission amongst many tabla players to bring back the original sound of the tabla and boost the use of clay drums all over again”.