Creating a sound that you will have rarely heard before, French/English collaborative music collective, Egyptian Project, deliver crazy trip-hop beats, infused with folkloric sounds from across Egypt for a unique take on fusion music. 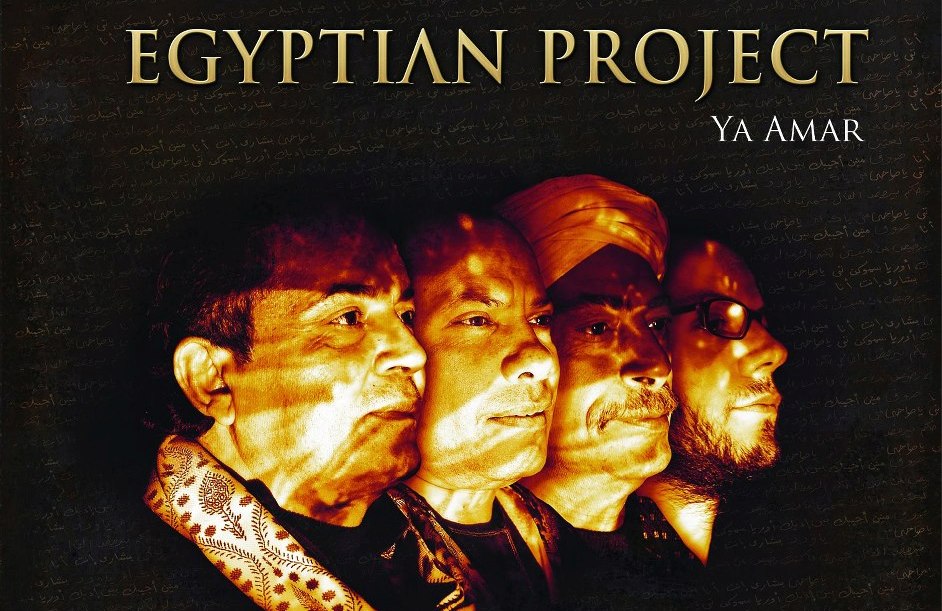 We love putting the spotlight on interesting underground bands, so ahead of their much-anticipated  ‘Ya Amar’  tour and their upcoming performance on 9th February at Cairo Jazz Club, we caught up with Jérôme Ettinger – the founder of the eclectic  musical ensemble – to delve deeper into the psychedelic rabbit hole that is the Egyptian Project…

What is the Egyptian Project all about and where did the name come from?

I began traveling to Cairo to study the arghul, a clarinet-like, double-pipe, single-reed woodwind instrument, that has a long history in Arabic music. My teacher, Mostafa Abdel Aziz, performed on the famous Egyptian orchestral recording of Mozart’s work, as well as with Peter Gabriel. During this time I have founded Zmiya, an electro-world band that sometimes explored Egyptian melodies, rhythms and lyrics. As my passion for Egyptian culture and music grew, I assembled a team of renowned artists for a touring band: percussionist Ragab Sadek, rababa player/violinist Salama Metwally, oud player Ihad Radwan and singer Sayed Eman, whose epic vocals decorate many of our album’s 10 songs. My idea was to mix electronic, acoustic and Egyptian traditional music and the band are all my family now. I manage and organize everything for all of them.

In the beginning, it was not easy to mix electronic and Egyptian music. The rababa player had never played this way. I told him that he only had eight measures to play, but he wouldn’t stop. It took a while to teach him to work in that construction. Taking three years to record Ya Amar, I wanted to respect Egypt’s traditional sound and not force it to fit into my electronic context. The fundamentals had to remain the same.

How long have you been performing as a band?

I met Ragab in 2007 but we have been touring as the Egyptian Project since 2010.

Tell us a bit about the current Ya Amar Tour…

We start in Egypt with 3, maybe 4 concerts: the French Institute Mounira on February 6th, Cairo Jazz Club on February 9th and French Institute Alexandria on February 14th. We are waiting for a confirmation for the Sun Festival. Then we have a month-long tour in France. We have a 7-gig tour in Morocco in July, over Ramadan. Ya Amar, our debut album, has had huge success in North America. Despite the fact that the audience doesn’t understand the lyrics, our album entered lot of charts: CMJ World Music Top 3, Rhapsody Top 30 World Albums of 2012, New York Daily News Top 10 Music Picks of October 2012, Earshot Top 3 for December 2012 and more. .We had a big success too in Switzerland at the Paleo Festival, where 6000 peoples attended our performance. We might be selected to perform at the 4th Forum Without Borders in Bulgaria in September. It’s the biggest music fair in Eastern Europe.

It’s not often you hear Oriental Folkloric fused with Electronic Trip-Hop. How would you sum up the sound?

It’s like the Egyptian poetry flying over a heavy psychedelic dub bass with a rock flavour.

Would you say you are the only Oriental, Folk, Electronic trip-hop band in the world?

Oh no, there are a lot of great bands and singers in this genre such as Dhafer Youssef, Ibrahim Maalouf, Natacha Atlas, DJ Mutamassik, Transglobal Underground, IAM from Marseilles in France, Imhotep, and more.

Massive Attack, Rolling Stones, Transglobal Underground, classical music such as Mozart, Debussy, reggae music… In fact, I’m open to any style. When the music is good, it’s good. I don’t like classifying it.

Whats the strangest thing that’s ever happened while you’ve been performing?

At the end of our show we usually get off the stage and join the crowd. I like jamming with the audience.

What do you have in store for us for your performance on the 9th at Cairo Jazz Club?

We’ll present our debut album, Ya Amar, but we’ll also have some surprises for the crowd guests. Maybe a jam…

Finally, how would you feel if another Oriental, Folk, Electronic trip-hop band came along in Egypt? Would that be a cause for concern for you?

Not at all. We actually have some workshops with Egyptian bands in Alexandria coming up  to help them regarding technique and artistic matters. I’d encourage every musician to play the music you like. Listen to as many different styles as you can, and the Internet is a fantastic tool to discover the world. Feel the music, be open to diversity, then let your heart speak.

Don’t miss an incredible night of music curtsy of The Egyptian Project at Cairo Jazz Club by book online here. Check out their Youtube Channel here. Keep up to date with the band on their Facebook Fanpage here.