The biggest musical duo in Cairo (literally), High on Body Fat have taken over the music scene and our office with hilarity. 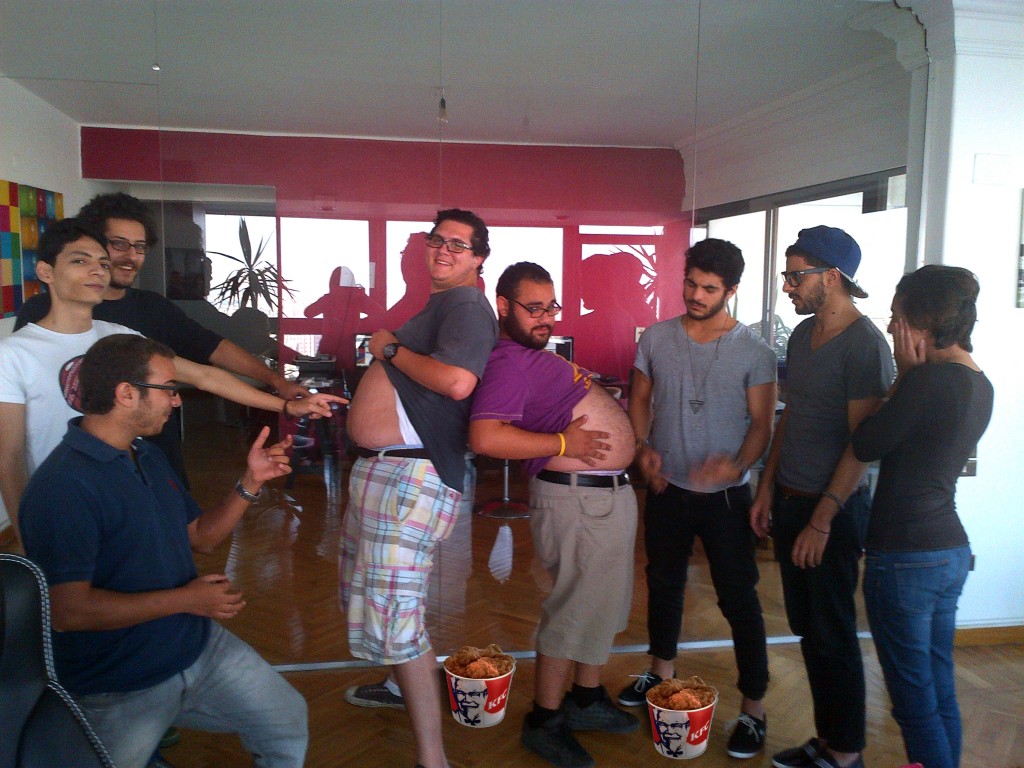 Nothing warms our CairoScene cockles more than fat people who sing. Our favourite fat people who sing – other than Bette Midler – are High on Body Fat. Famed for their musical satirical social commentary (“I would catch a molotov for you”) and for royally screwing up in the semi-finals of Arabs Got Talent, we asked them over to the MO4 offices to talk cholesterol, stalkers and sex tapes…

What is your cholesterol level?

Is it a competition to see who can have the highest cholesterol level?

If you lost weight would you still be called High On Body Fat?

Ahmed: We are both trying to lose weight so we are going through that dilemma now.

So how did you two fatties get together?

Ahmed: I  wrote a parody of Bad Romance because I absolutely hate Lady Gaga. Then I met Marwan, and we knew we were destined to be together.

Where exactly did you meet?

Marwan: At a standup comedy audition for Arabs Gone Wild. We were going to create a YouTube channel featuring these songs. We never got a chance to make the videos so we started playing live instead.

Ahmed: Our first live gig was at El Makan. After listening to our version of Bad Romance people said they’d never be able to listen to Lady Gaga in the same way again.

But are you real musicians or just jokers?

Ahmed: And I sing.

Marwan: When we’re not doing our High on Body Fat thing, Ahmed plays trumpet and I actually grew up playing the piano.

YES! We ALL play air guitar too! ‘Tis such a coincidence…

Which instruments get the most chicks?

Marwan: I know one instrument that gets chicks. Well, you play with it a lot.

We don’t like innuendoes here at CairoScene Marwan. Wash your mouth out with soap. Now,obviously there’s a huge similarity between yourselves and Flight of the Conchords. Are they an inspiration?

Ahmed: And then there’s Tenacious D

What’s your favorite Flight of  the Conchords song?

Anything interesting in the pipeline?

Ahmed:  We’re in the process of writing a TV show. We’re trying to get it perfect.

OK, now we’ve got to talk about your appearance on Arabs Got Talent. Are the female host’s boobs as nice in real life?

They’re a bit scary. Always out there, which was quite intimidating when we were playing. We tried not to look straight at them, but we inevitably failed.

Was Arabs Got Talent an enlightening experience or just painful?

A bit of both.

Now let’s talk about that really painful, awkward and embarrassing moment when you screwed up in the semi-finals…

Ahmed: We jumped off the tuktuk and the tuktuk pulled the wire out of the amplifier. I thought maybe it was just the monitor and then I was like fuuuucckk.

Marwan: They didn’t even let us replay it or anything.

Do you have any weird stalker fans?

Do you get jealous when he gives Hany Must more attention than you?

No because we are Hany Must groupies.

If a woman with six boobs wanted to make love to you, would you be game?

Have you had that moment yet when you think, “Hell yeah, I’m famous”?

Ahmed: I was in Maadi in a restaurant with a couple of friends and this really hot chick walked in. She looked at me and shot me this smile, and I was like HOLY SHIT what have I done?! And she walked up to me and I was like IT’S YOUR DAY TODAY. And she’s like, “Enta betghany 3al eshaal.”  And I was like, urghh, and put my head down.

Marwan: After Arabs Got Talent, people would stop us in the street and take photos. It was ridiculous. We didn’t realize so many people watched that show. Before that the only thing that made us feel famous was someone covering our  Tant Samia song and singing it on YouTube.

So when are we to expect a High on Body Fat album?

Do your parents approve of you?

Ahmed: My mother does not approve of me being fat if that’s your question

There’s a deal on Dealwaty.com  for 400 LE worth of Gringos mexican food for 200LE…

Marwan: The diet can WAIT.

Would you ever consider being serious musicians or are you worried that people can never take you seriously now?

Ahmed:  I’m doing some solo stuff right now, and half way through one of my performances the guy was like, where’s the punch line? After three songs, he was like,  this isn’t funny man.

Do you have real jobs?

Marwan: I work at Planet 360 as a graphic designer.

How do you come up with your songs?

Marwan: When it’s an original, we just come up with a concept and then throw in some lyrics or music and get into it from there. It gets tricky sometimes.

Ahmed: Right now we are writing this song about a problem that fat people face.

OK, now we will shoot words at you and you will improvise some songs…

Are you guys single?

Is that an actual fiancé or someone you met on World of Warcraft?

Are you Jedi or Sith?

The music industry these days, it’s very fabricated, no one is creative. Most popular musical acts are just the product of a corporate system. This begs the question,  what is your favorite Pokemon?

If you had special superpowers, what would they be?

Ahmed, are you going to follow Marwan wherever he teleports?

Ahmed: I just want go to Brazil without any visas, is that too much to ask?

If you could sleep with any woman called Haifa Wahbe, who would it be?

Ahmad: I’m not really sure.. is that a trick question?  I guess Haifa Wahbe.

Have you ever thought about releasing a sex tape to get your name out there?

Marwan: I would do it just to get Ahmed laid.

Ahmed: We would call it Missionary Impossible.