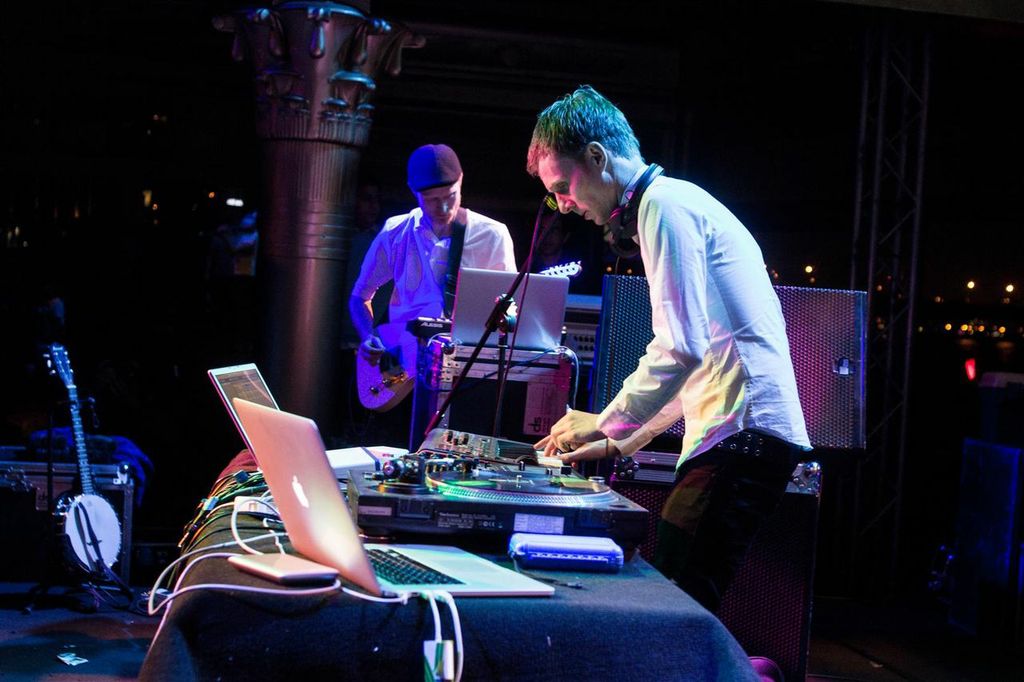 I always find it pretty incredible how percussion bands, through completely organic means, can turn five guys banging on objects, to a full-on song, complete with melodies and a bass line causing an absolute dancing frenzy. I was loving The Percussion Show at the Temple; they’re more khabt than any other DJ in Egypt… literally. At the end of the set the vocalist did his best impression of an MC, attempting to introduce the next band in this one-off Nacelle Live night:

“AND  GET READY FOR THIS NEXT AMAZING BAND FROM… FROM…”

He pauses, puts his hand over the mic, turns to his left , goes out of site then returns to the mic…

“FROM HOLLAND!” The crowd cheers.

The next band was in fact from Ireland.

It wasn’t a great start. I remembered a Nacelle night a couple of months back when Tito was standing behind the decks at Friday House Sessions and, right at the peak of the night, I was standing next to him (right at the chemical peak of my night)and asked him why he doesn’t use this momentum to bring band culture back into Egypt’s music scene (if there ever was one). He told me: “Just wait. We have these seriously cool cats coming in, in a few months, I promise. Just wait.”

Last week he announced the party. I wasn’t optimistic. For starters he had called them “cool cats”. Secondly, I was thinking more Arctic Monkeys  not a 7-piece (nothing cool has 7 pieces),Irish (I’m thinking River Dance) orchestra (orchestra). None of these words sounded promising but everything changed when the Electro Swing outfit, Kormac’s Big Band, took to the stage.

It started with the visual element: an elderly well-dressed man gave an ethereal speech full of cosmic wonder as seven white guys who had the swag of geography teachers swarmed the stage around the center piece that was DJ Kormac behind the decks. That then came to a sharp end, interrupted by a mind-blowingly refreshing beat that had more funk and swag than James Brown and Kanye West combined. The term “pretty fly for a white guy” was never more apt. The fact that the musicians had these R& B dance jigs that their kids back in Ireland would probably be embarrassed to see genuinely made them the most charming band in the world, but Kormac was from another planet. Finishing his first two tracks, with the crowd already more than impressed, he grabs the mic, tilts his head around it, spreads his arms out like Jack the Lad and bellows “’Ellloo Cairo, are you having a good time? Are you ready to start this shit?!”

Everyone went mental. If you squinted, as far as looks and charisma go, he was the love child of Mike Skinner and Ian Curtis. Stood in the middle of the dance floor, I knew that this live music shouldn’t be wasted on social niceties. I didn’t want to be interrupted every five seconds by someone saying hi or telling me how good the band was. I went  off to the back of the Temple so I could dance my ass off on my own. The trumpets made every song sound like a stadium anthem and each kick was like a defibrillator to the heart. The tracks were grimy and dark but also rhythmic and powerful.

Normally, when I go to Nacelle, the Deep Khabt and Techno gives so much anxiety that I have to listen to Chopin or Mozart on Saturday morning to balance it out, but every one of Kormac’s Big Band’s tracks had it all. From Hip Hop to Jazz, Deep House and Breakbeat, you could clap along, rap along, sing along or rave along. The people behind Nacelle were pure genius for choosing this live act which transcends era, genre and geography, taking you from an opera house to an arena and from New Orleans Jazz to 90’s Rave to Atlanta Hip Hop in less than a track.