Having forged her unique artistic path, no holds barred, by collaborating and creating with whatever interests her, Maii Waleed is a musician on a mission of self-expression. On the tails of her latest EP with Zeid Hamdan, Eihab Boraie finds out what makes her tick. 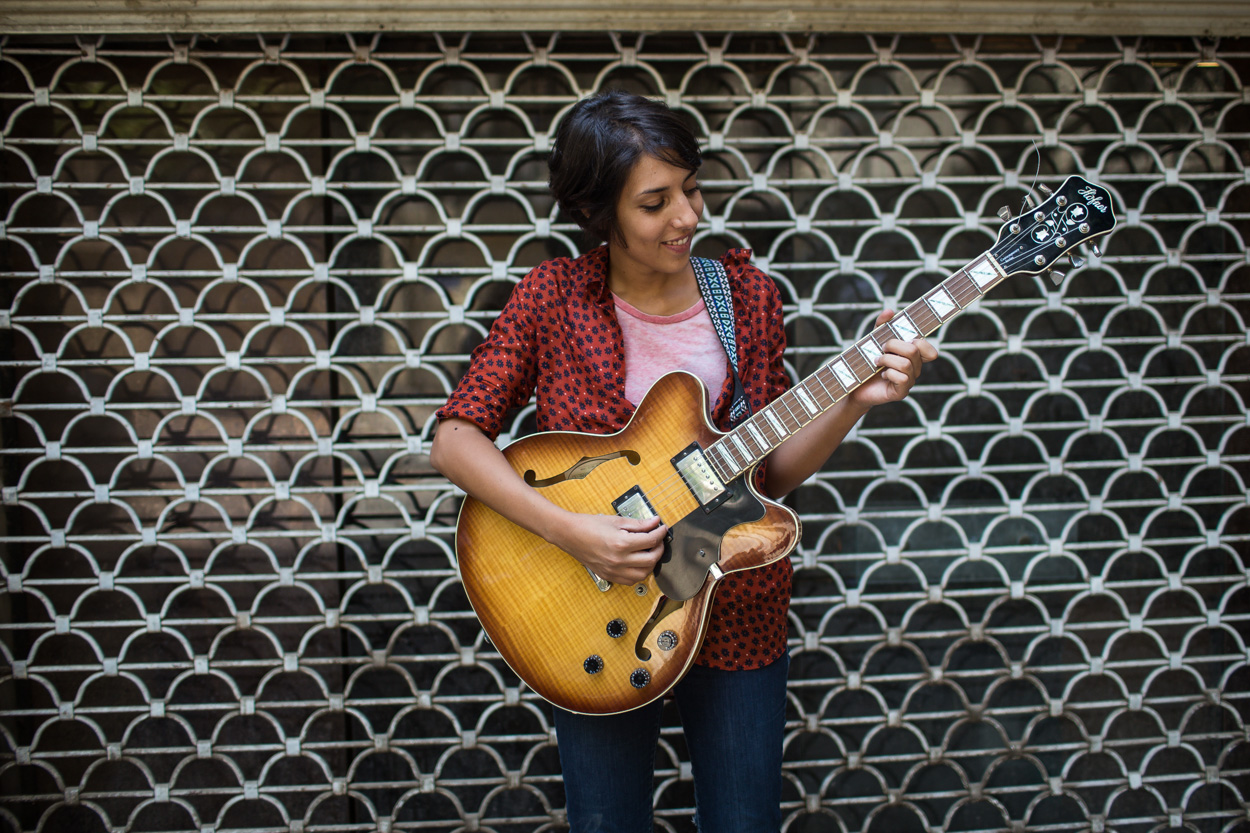 Expressing oneself using artistic mediums is the purest form of representation. Sometimes it’s just too difficult to know how to express one’s feelings with the words. There are multiple artistic mediums that convey how one feels, but there far too few individuals who devote themselves to knowing how to use them effectively. Proving to be one of the devoted few is none other than Maii Waleed. With the release of the new Maii and Zeid EP, Ezaal, I decide to chat to the songstress about the endless search for sounds, and exploring new mediums to best express an artist’s journey of self discovery.

If you are in Egypt and are passionate about music enough to support local artists by actually attending live shows, then chances are you may have seen Maii Waleed on a stage. Avoiding being labeled, Maii tends to hide from the spotlight, but has shone in a variety of different projects along her musical journey. “I used to be very active in school activities like the choir, the drama club, participating in musical poetry competitions. So as a kid I was very much interested in music and arts and expressing myself with my body and my voice,” Maii reminisces. Like many musicians, it began with a guitar at the age of 17, but as a sign of an interesting artist, the first song she learnt to play wasn’t cover, but an original. “It was definitely a love song. It was in English. I really started writing in Arabic two years later when I was feeling, okay why am I writing in English? I’m Egyptian. I think it was more natural in the beginning to write in English because I was listening to English music.” Talking about musical inspirations Maii makes it very clear that she doesn’t concern herself with genres or following trends but eventually settles on the phenomenal PJ Harvey as a possible source of inspiration. “She's a person that truly inspires me because, I’m not a person who 'follows' people but PJ Harvey is a person who I think I'd follow enough myself. Album after album you can see that this is a girl experiencing life, experiencing her emotions and her tool of getting it outwards is music,” believes Maii.

In the pursuit to do the same Maii, has been part of many musical outfits and has met a variety talented artists from across the Arab world that helped her figure out the sounds that best express her emotions. Although Maii started by writing an original she practiced her craft early on, playing a mix of covers live. “I had a band when I was much younger than that and we used to do covers for Travis, Garbage, The Cardigans,” describes Maii of her musical debut.

Looking to explore darker sounds, Maii took on a new instrument for an all-girl grunge band named Nail Polish with her talented friend Cherine Amr. According to Maii, “I was the drummer and we played some Nirvana covers, some Smashing Pumpkins covers. We performed once here in Cairo but Cherine wanted to make it more hardcore, and I wasn’t really into that.” When they split Cherine went on to form Mascara, while Maii joined “a band called Samaka. I was making it with three other people; Samir Nabil, Sameh Nabil (his twin brother) and my ex-boyfriend. It was a very intimate experience, we were very good friends.”

Although the break up was difficult, Maii took the opportunity to step away from music and venture into expressing herself behind the lens. According to Maii, “Me and my ex broke-up and I couldn't play music anymore and then I decided to move to Cairo to be in this film-making workshop for two years.” Upon learning a new medium with which to express her artistic vision, Maii began taking her original solo musical efforts and attempting to convey it visually with the help of her friend and Mascara’s bassist Perry Motaz. “We made a video together for one of my songs called Moga. Perry was working in cinema as well, so we had our cameras and did our own editing,” explains Maii. It was around that time that a chance bus ride home to Alexandria to visit family resulted in an impromptu hotel recording session with Zeid Hamdan. Maii explains that “I think Mahmoud Radaideh (of Jordan’s Jadal) told Zeid that this girl has really nice songs. So when Zeid was in Egypt touring, he told me to bring my guitar to the hotel and let’s try to see if we can do something. I wasn’t nervous because he is such an experienced musician. I was very happy because I thought okay, someone is interested in my music. He had this fun energy around him, very relaxed!” Zeid recorded Maii’s tracks in the hotel room, but wouldn’t really start working on it until a couple years later.

Upon revisiting the tracks, a connection was made, and Maii travelled to Lebanon to record their debut album Moga. “I went to Beirut and we recorded the album together. The whole process wasn’t just taking my voice and doing things over it or producing them on his own. He would take my opinion in every little detail! He respects my compositions so much, he never wanted to change anything with them, but yet managed to add his own character and sounds to it. I think by this time we discovered wow, we're kind of similar in a certain area, and with time – until now – we're still discovering how similar we are.” The Electro Pop album is a refreshing sound that has attracted fans across the Arab world hungering for an alternative to the mainstream. Since teaming up with Zeid, Maii has been travelling all over the Middle East sharing her gift. Fortunately, I was able to see them perform this past April at the 3alganoob festival. The duo delighted those in attendance with their unique blend of Pop vocals and electronic rhythms. There was airiness to the sound that perfectly matched the beach stage, although Maii seemed somewhat tense on stage admitting that “I’m still very anxious on stage, you have no idea! And I haven’t overcome it but it’s a goal of mine to keep on reminding myself 'Don’t judge yourself, just do what you’re doing. You're sharing something that’s precious to me, and if someone's out there that's ready to receive, that’s amazing!'”

As an artist, Maii's horizons continue to broaden with every passing project. Currently, she is working on a docudrama, jamming with a variety of musicians outside of Egypt in search of new sounds and projects, and has just released a new Maii & Zeid EP. Unconcerned with fame or borders, Maii is perfectly content with committing to her passion and hopes to connect with audiences around the world who are in tune with her particular frequency.

Throwing away good job in Abu Dhabi, Maii is devoted to making a living expressing herself through the arts. As a strong independent talent, the question isn’t will Maii create something new, but rather which medium she will choose to do it. “I see myself as an artist. I see myself as a person who's very sensitive. I observe a lot and with time, I've realised that I’m a person who likes to express what I’ve absorbed or what I've felt, and so choosing the right tool for each thought or expression is something that I left open; this specific moment I could do a song about it, this existential thought would be nice if I made a documentary about it.”

It isn’t everyday that you find an artist with that kind of drive and range. With every project, it seems Maii has learned something new about herself, or about her approach to art. Being committed to that kind of self-discovery is always a sign of good artist that will remain interesting and relevant with age.