After debuting the much-anticipated album exclusively before its release, Scene Noise takes a critical listen to the indie record. 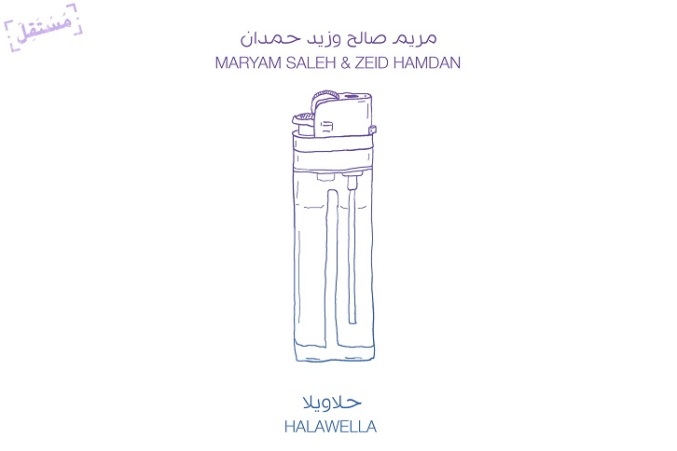 Reviewing Halawella isn't particularly easy, as there’s not much to compare it to in recent Egyptian music forums. For starters, covers of Sheikh Imam in Maryam Saleh’s way of singing was really refreshing to hear as it was disturbing given the Electro background going on. Which could be the very exact thing the artists were going for, given the artist that is being covered and the lyrical content.

A few tracks in, you begin to ease more into the delivery and it actually begins to sound as playful as it is pleasant. The political lyrics of Ahmed Fouad Negm and Sheikh Imam are still relevant today as they were 30+ years ago. The exposure of such alternate works with a political tone to a completely new set of audience is perhaps a much needed necessity that only Maryam could present, and no better way to make it appealing than with Zeid Hamdan’s Electro-Pop sounds. It didn’t take long for Negm and Imam’s works to be banned from Radio and all public media, but now with all the non-government mediums it’s perhaps time such works were reintroduced.

Our favourite tracks include Nixon Baba, an indie electronica number with again super witty political lyrics and funny. Emchi Ala Remchi, a somber rock guitar driven ballad type of tune, is another stand out, as Ghaba, another electronic number but perhaps slightly darker given the lyrics and the music. Walaa Soda is actually a Maryam and Zeid original and is just as powerful and political as its predecessors. The road less taken is definitely rare to witness here, hence it has to be acknowledged.

The album is refreshing, Maryam’s delivery is unexpected as it is comical and playful, Zeid’s as confident and enigmatic as ever and it definitely shows in his music which ranges in this album from Folk to Pop and Electro to Hip Hop. The timeless politically infused lyrics of Ahmed Foud Negm couldn’t have come at a better time. Kudos to everyone involved and we hope this inspires many upcoming artists to try something different. Maryam’s raw folk rooted vocals perfectly blend with Hamdan’s ability to arrange interesting Electro Pop beats, and the result was utterly unique as it was pleasant. Have a listen and help support their efforts and project buy purchasing some music here.