Meet the enigmatic singer, songwriter and budding producer whose unmistakable voice is set to redefine independent music in the Arab world. Timmy Mowafi meets Nadah El Shazly to talk everything from singing in the shower to taking centre stage... 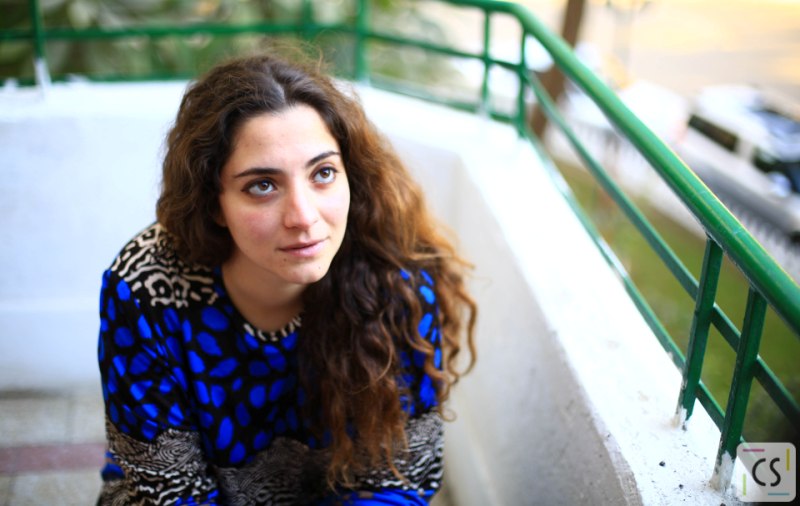 I hear Nadah El Shazly before I see her. Her massive mellifluous hum echoes down the staircase as I walk up to her apartment, fluctuating notes that lay somewhere between Edith Piaf, Yasmine Hamdan and The Little Mermaid. She's always singing. And it's on the staircase of her childhood home that she first discovered the seeds of these extraordinary tones.

"I used to sing a lot in the bathroom when I was younger," El Shazly begins with her dewy-eyed smile. "Then I started singing in the living room and then I moved to the staircase on my way out every day, where one day I bumped into someone who told me said 'your voice is lovely, habibty!' and then that was the first external, positive reinforcement I got; the first time I understood what it means for someone to have a beautiful voice."

Her voice developed over the years, taking parts in a handful of school plays before joining the choir where she was motivated to delve deep into the dynamics of finding ones voice, eventually being pushed into operatic singing. As we talk, she places a hand over her stomach, takes a deep breath and bellows out a hair-raising soprano sound, before explaining she was actually also vocalist of a Punk-Rock band  called Sick Gdrsch when she was 17. "I left the those opera lessons because I had a teacher who wanted me to sing exactly like her. My Punk Rock band was fashikha! We would cover Misfits, and that, I believe, was the time where I was experimenting the most, it was very exciting!"

Experimentation has played a big part in her blossoming vocation, as she seemingly sets her sights on any one sound and follows it blindly, figuring things out as she goes along; an attitude that antitheses the perfectionist, but has now led to her having the potential to become the new First Lady of Egypt's contemporary Oriental music scene. And she’s picked up some important fans along the way, including the legendary Palestinian artist Kamilya Jubran who last week held a workshop that El Shazly helped organise, along with 100 Copies founder Mahmoud Refaat, the man who seems to have his hand in the rise of almost every significant sound that has developed in Cairo. Refaat also gave El Shazly the opportunity to present the first performance of her Electronic based works live; "I jump into things and then I fuck myself with 'what the hell did I just do?!' later on… But I think I get a lot more support now from the people around me."

Her early online releases are minimal, melodramatic affairs - usually just a single instrument and her fluttering Arabic vocals that take their roots in Blues, Jazz and early 1900 Egyptian singers. "1890s, 1930s and 1940s music from the region is really interesting! I have never heard it anywhere else. It’s a lot of things that come together. When I listen to Monira El Mahdeya as she sings, for instance. The way she sings... She opens her mouth so wide and her voice is so big and that’s something that attracts me so much… I feel like I want to do the same thing; open my mouth wide and sing!"

In 2009 she got a full-time gig singing as vocalist with a Jazz cover band at places like After Eight and Holiday Inn, before taking some time off to find her own sound. Despite playing the piano, drums and dabbling in the guitar and the bağlama, her focus fell on Electronic music when she began collaborating with beat-maker Mohamed Shafiq. "You know when you get that feeling of 'Hey, I wanna do that!'" she says.

They created the band Shorba, releasing two singles with over 70,000 listens on Soundcloud. The first, Ghaba, see her vocals explore fluctuating intonation over an intense spiralling Noise-based beat and the other, Shorbet Rosas, goes from snake-charmer to a kind of mean, industrial Hip Hop sound, with El Shazly boasting her vocal range between Jazzy-Pop English and Arabic verses. The over-riding feeling is that her voice just works on pretty much anything.

Not wholly content with Shorba's popularity, she decided to jump into another experiment, another 'Hey, I wanna do that!' moment after listening to Epic 101 Studios production course graduate Cartoon Therapy perform. "I was just fascinated by the idea of you being the one creating this music and that you can go beyond the horizon of just making a beat - you can build up a line, you can do a lot of different things! I really wanted to do that in order to see what I would be able to produce, if that’s what I worked with."

She took the course, telling herself "by the end, I'm going to come up with a set which I'm going to play live" and began finding her own sound which was eventually carved into a 40-minute set that has now been performed all over the country, debuting at 100 Copies. "I felt like I was at an exhibition because everyone is just sitting there, intense, focused and not distracted by anything at all! It was perfect for a first gig because it’s a small venue and a lot of my friends were there, but it’s fucking tough! Especially that I don’t have instruments - I always feel like I'm about to do a Power Point presentation with my laptop,” she jokes.

I headed to watch the last of her live "Power Point presentations" for this set at a packed Vent in December. Indeed, at times, she fiddles with the software on stage as if there by accident; as if she stumbled upon it the same day and thought she might as well use it, put something together as a little extra. But what the performance lacks in dynamism is fully made up for in the elegant dissonance between the quirky corrugated beats she fights with and that stirring, adaptable voice that's come along way since the staircase. I suggest that the productions have this sort of glitch, Hip Hop vibe fishing for her inspirations and get a rather blank look back. She listens to James Blake a lot, "but that’s where I stopped..." She hardly listens to any electronic music and through that uninfluenced process, her sound is undoubtedly fresh and fearless. I watch as she absorbs the crowd into a swaying trance with a mawwal-style sardonic love song and spits them out into a head-bopping, arm-raising bass-y tribal beat.

"If I manage to take them somewhere where they can be lost in the song, that's a big compliment," El Shazly explains. "Or 7elwa awi el presentation di!”

El Shazly, though, wants to move away from the presentation. "The only thing that I play live is my voice and this is something that I want to develop, I want to play the music live and I want to start playing with other musicians instead of having it automated." There is room for growth with her lyrical prowess, too, she says; "if you notice my sets, you’ll see a lot of repetitive lyrical loops because for some reason I still can’t connect with the part of me that writes… The things that I write about are still a bit graphic… I'm trying to be very descriptive but I don’t have something specific that I want to discuss," she admits.

We finish off the interview at a grassy roundabout bench where a few young B-Boys from the neighbourhood are blasting out Dubstep from their mobiles. El Shazly half jokes about wanting to start her avant-garde alter-ego with a name like Shazlula and begins to sing elaborate vocal loops over the scratchy tones coming from their phones. Shazlula gets a standing ovation from the B-Boys. She can literally sing on anything.

Beyond Shazlula and developing her live set, she wants to compose music full-time, "to write lines on the beach, collaborate with different musicians, to have a huge band with a lot of stuff going on," and when Nada El Shazly wants to do something, she usually does.