Bringing together four unique artists from four different corners of Egypt's new musical spectrum, Crush - organised by the people who know the scene best - is set to take over El Sawy Cultural Wheel with some serious sounds this month... 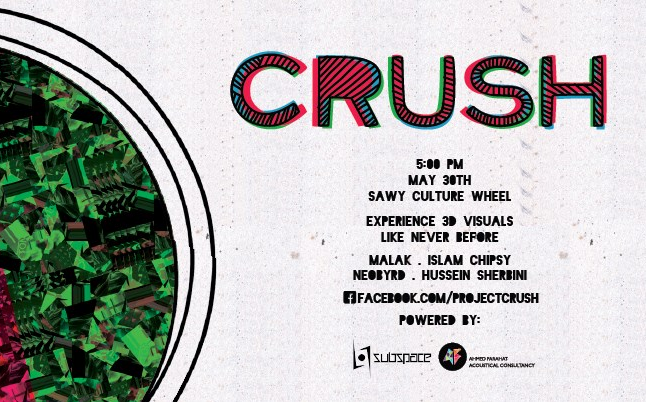 With parables exhausted, and the long awaited paradigm shift from DJ fanaticism and dancing Russians to artistic expression and eclectic soundscapes coming to afore, let us swiftly introduce you to Crush.

The new series of events is the brainchild of Aly Samaha, founder of Subspace Records, and Ahmed Farahat of AF Acoustical consultancy, and is set to seal the stamp on Egypt’s music scene that allows us to legitimately use terms like ‘burgeoning’ and ‘eclectic’.

Thankfully, this scene is starting to breed less party organisers and more people who just want to get together to create cool shit. There’s more independent venues popping up, more studios, people are listening to more left-field music and, with the line-up of artists announced for 30th May, we can definitively say this is cool shit. Samaha, one of the bannermen for cool shit, hopes Crush will do much to fill a gap that still persists between Egypt’s young musical talent and its audience: “the musicians are all presented through fragmented mediums - to a fragmented audience! Crush aims to be a platform to bring all the best musicians of the scene in one place, at one hub; to consolidate the talents and focus on all their fan bases to produce a unified audience and following, so that the event can gather thousands rather than hundreds.”

The line-up of acts from Crush part one is acutely diverse with four artists that are pioneering their genres in the country: Malak, one of Subspace’s signings, who has recently exploded into relative prominence with the release of her debut EP, the dreamy folk pop journey that is Alters; Neobyrd, of bird mask fame and international acclaim, who makes retro synth sounds his bitch with signature French Electro House tunes; Hussein Sherbini a mad scientist of heavy bass oriented beats and emotive industrial sounds that rustles nicely somewhere between Techno and an alternative dimension dance off and, finally, Islam Chipsy, the man who has re-invented Shaa3bi music with his ground-breaking technique; two drummers bang away in sync, as Chipsy bangs away at his keyboard with equal pace and aggression. Artist from four corners of the spectrum is great news for Cairo’s hungry listeners Samaha told us, “as long as there is a thread that strings the group together, I am happy, the looser they are strung together the better in my opinion, as it will attract a more diverse crowd and introduce different audiences to different musicians and different crowd. We want to get anyone who really rocks a stage, performers...” he added.

The event will be held at Sawy Culture Wheel’s River Hall, a venue that can host thousands and doesn’t serve alcohol meaning it’ll be all about the show and not about shots. Meticulous effort has also been put in to make sure it’ll certainly be a show, “We’ve upgraded the sound system to JBL line-arrays offering maximum power handling whilst maintaining clarity and high fidelity… and face melting punchy bass,” creative-director Farahat told us before letting us in on the custom 3D projection mapping visual instillation they have planned that’ll be “the first of its kind in Egypt on a large scale”.

Well, we can’t wait to show our new crush some love.

Crush kicks off at 5PM on 30th May and tickets are available for purchase from the venue prior to and on the day of the event at the venue, Sawy Culture Wheel, Zamalek.

Keep up to date with CRUSH on their Facebook fanpage here.