The album was recorded at Abbey Road studios in conjunction with the Royal Philharmonic Orchestra and Mark Ronson. 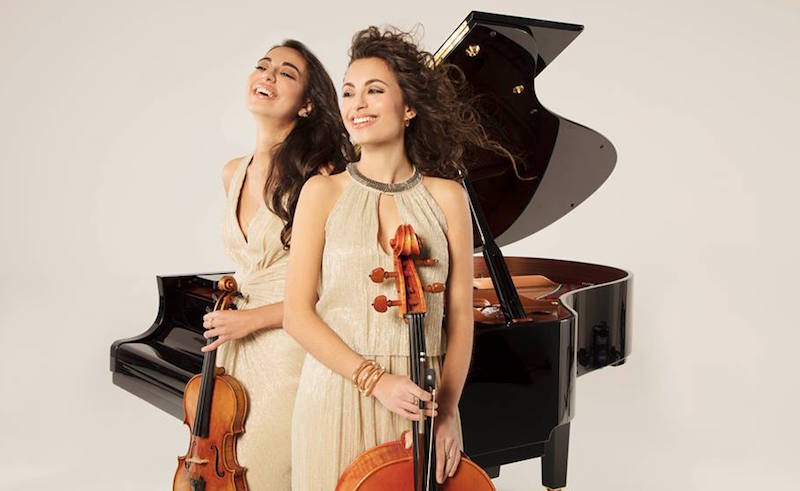 The Ayoub Sisters, Egyptian/Scottish classical musicians, are taking the classical world by storm; their recent accomplishments necessitate a list. Laura, 21, and Sarah, 24, recently hit the top spot in the iTunes Classical Album charts with their album The Ayoub Sisters, which they recorded in nine hours at Abbey Road studios in conjunction with Mark Ronson and the Royal Philharmonic Orchestra. This came after they uploaded a classical version of Ronson’s Uptown Funk on YouTube, consequently catching his attention. Additionally, The Ayoub Sisters just landed a record deal with the legendary Decca Records. Born to Egyptian parents and raised near Glasgow, Laura and Sarah grew up surrounded by classical and Arabic music. They have been playing together since early childhood, and though Laura is primarily on violin and Sarah on cello, they are both multi-instrumentalists, and characteristically employ loop pedals. The sisters have stirred up a lot of excitement, shooting to stardom in the classical and crossover worlds in a flash. We talked to them about topping charts, their connection to Egypt, and swapping instruments.

Last week you hit the top spot in the iTunes Classical Album charts with your album The Ayoub Sisters. Did you have any expectation that it would be this popular?

We really did not know what to expect! We are so grateful to have the opportunity to share our music with a wider audience and for it to have been well received and gain a positive reaction from the public is so humbling.

It’s not your first time at the top. How many other charts have you topped this year?

We have been very lucky. We released two other singles this year which both went straight to No. 1!The bulk of the album was recorded in 9 hours at Abbey Road Studios, with the RPO. I’m sure that elicited a lot of emotions. What was the predominant vibe of the session?

We were fortunate enough to have the RPO accompany our recording session, who were absolutely brilliant. The orchestra were so positive and friendly, so the vibe was great. We had a lot to do in such little time, but the energy of the ensemble made it happen successfully and efficiently.

The first time we swapped instruments on stage was at a sold-out concert in The Royal Albert Hall, London, which was broadcasted live on Classic FM. We had such an amazing reaction from the audience and as a result of that performance we were signed to Decca Records.

Your new album hits a wide variety of genres, including songs such as Pie Jesu, Uptown Funk, Billie Jean and Misirlou, as well as an original track. Was there any underlying concept for the album, or any guiding theme in what songs you chose?

We took the opportunity to showcase ourselves as people as well as musicians in this album. We are Scottish/Egyptian, multi-instrumentalists as well as classically trained musicians who have a passion for other genres. Our aim was to show all of this but still maintain a cohesive classical sound world which we hope would ultimately bridge the gap between listeners who would normally listen to a symphony orchestra as well as individuals who listen to more popular music.

How did you feel about working with Mark Ronson? Did you get on well with him? Were you previously a fan of his work?

Working with Mark Ronson was an absolute pleasure. He is such a humble man and very down to earth. We admired his work as a producer with Amy Winehouse, Adele and Lily Allen - not to mention his masterpiece of Uptown Funk. We were so fortunate to meet him and would love the opportunity to work with him again.

As we know, you are classically trained, but did you ever study Arabic music?

We never ‘studied’ Arabic music but were of course surrounded by it growing up. It is a distinct musical flavour which reminds us of our family culture back home. It is definitely a style that we would like to explore and learn more about.

Aside from classical music, what genres inspire you most?

We love listening to a variety of genres, from pop to jazz to world music. As classically trained musicians we are greatly intrigued and inspired by jazz harmony and are still looking to learn more about this fascinating foreign language.

Do you feel restricted at all by the classical music world?

We love classical music and don’t feel at all restricted by the genre. We have definitely taken the initiative to make something creative and different with our skill sets within the classical music world which keeps things fresh and exciting.

You swap instruments during performances sometimes, which among other things you do is unconventional in classical performances. Have you had any stand-out reactions from audience members?

The first time we swapped instruments on stage was at a sold-out concert in The Royal Albert Hall, London, which was broadcasted live on Classic FM. We had such an amazing reaction from the audience and as a result of that performance we were signed to Decca Records.

Where in Egypt are your parents from? Did you grow up visiting?

Our parents were born and raised in Cairo before moving to the UK (Glasgow) about 25 years ago. We were born in Scotland but our family is all back in Cairo, and so we try and visit at least once a year to get our healthy dose of the Egyptian culture!

We have definitely taken the initiative to make something creative and different with our skill sets within the classical music world which keeps things fresh and exciting. Do you have any collaborations coming up, or anyone that you would really like to work with? Any genres you want to break into?

We are going on tour with Gareth Malone in November and will be collaborating with him as well as the amazing a capella group The Swingle Singers - which we are truly excited about!

We would love to collaborate with the Metropol Orkestra who are based in the Netherlands. They are one of the most famous cross over orchestras in Europe who perform a wide range of genres and styles - we are big fans of what they do.

We heard you are coming to Egypt in the next few months. Are you planning to perform while here?

We are coming to Cairo in January to visit family but would love the opportunity to perform in Egypt! We have collaborated with the Cairo Symphony Orchestra in the past and it would be a dream come true to collaborate once again. Your accomplishments are vast. You have recorded at Abbey Road, performed at Royal Albert Hall, worked with Mark Ronson, and just signed with the famed Decca Records, among other things. That is beyond impressive, especially considering you are both in your early twenties. What is next?

Our next step is to hopefully share our music far and wide and see where the album takes us! We are so fortunate to have had these amazing opportunities so far and would like to continue to grow as musicians and people and see what the future holds together as a duo.