The Greatest DJ in the Universe

Crowned by CairoScene as the Greatest DJ in the Universe, we speak to the man himself, Aly B, about his experiences in the industry, his preference for gingers, and his undying bromance with Marc Wahba. 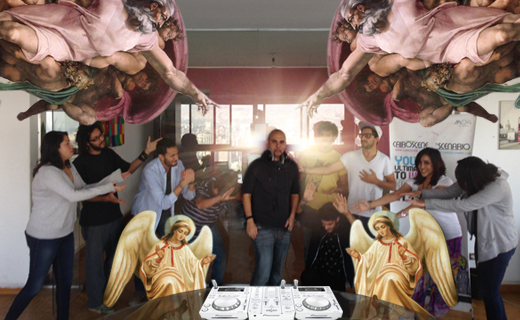 Our ears first caught a mind-blowing whiff of Aly B before the summer when Goyte’s Somebody That I Used to Know and Coldplay’s Viva La Vida remixes reverberated through every wall, in every night club. The House music scene was still infantile, and there were just a hand few of DJs circulating, playing the same commercial tracks, and there were none of the 10 hour khabt-fests that accentuate the nightlife scene today. He was unknown to many, but touted as the best thing since sliced samples to few.

We first heard him kill it with a hugely diverse set and alternative track selection including Bloc Party and Hot Chip remixes at Cairo Jazz Club, which was usually emptied out at 1 or 2 AM back then… but as soon as Aly B took the spotlight, the gig was literally packed with people dancing their asses off till 4.30 in the morning! After that, and a spattering of Aly B gigs, where he proved to be a shining beacon in Egypt’s DJ scene, we knighted him with the somewhat superfluous title, The Best DJ in The Universe, and he hasn’t let us down since. He worked with Tito to turn Nacelle’s House Sessions into the massive success it has become today, and since then, he has secured gigs abroad in Lebanon and London. Nonetheless, he still walks around with the same meek humility and modesty, unlike many other spinners on the scene. After two years of trying to get him in for Music Matters, he finally agreed to give us his first ever interview…

I think the Ginger one. For obvious reasons.

When did you realise you were the greatest DJ in the universe?

To be honest, I think that’s far from the truth. I realised it when you guys kept labeling me that! El kalam da mish ha2ee2y!

When did you first get into music?

I used to play the saxophone actually for 12 years, but with Djing, I started off ten years ago in my bedroom messing about on Ableton, CDJs and Traktor. Now I mainly use Traktor.

When was your first gig?

My cousin’s girlfriend was having a birthday party in the cabinas in Hacienda about three years ago. It was the first time people heard me. It went really well because people heard something new during a time where it was all about the commercial music scene and not much else.

Then, professionally speaking, I started Djing when Tito and I met and decided to start House Sessions. There was also a gig at Cairo Jazz Club, Samba gave me a chance to play and gave me most of his set time.

How did you meet Tito?

It was a birthday party in Agami. I saw this dude coming in with vinyls and we started talking. Later on we played a couple of gigs before House Sessions started. He was a big part in pushing me forward because he let me play exactly what I wanted. He’s an amazing party organiser who’s full of ideas, it was just him and I at House Sessions when it started, before we began to build the collective. There was a lot of promising DJs emerging, and we got in Baher, Aly Goede and Hisham Zahran.

What kind of things do you look for when deciding on a Nacelle resident?

People who are true to their music, who don’t fall for the hype and who just play for the sake of playing.

Do you have a lot of DJs coming up and asking you if they can play Nacelle?

Yeah! Tito usually sends them packing my way. I’ll always listen to them because I put myself in their position. I was a person just playing in his room for years on end, and I know I would have been grateful for the opportunity.

Finish the sentence. Nacelle is…

Was it a big step for you to go from bedroom DJ to playing for crowds?

Like I said, the whole commercial music scene was in charge at the time, and it was hard for someone like me to co-exist. It wasn’t a fight I was willing to have, but luckily people liked my sound.

Have you ever been in a situation where there’s been a crowd not dancing at all until you take the stage?

I don’t know about that, maybe. But there has been a situation where I’ve gone on and everyone stopped dancing!

What’s the best gig you’ve had in Egypt?

Probably the last one, at Nacelle.

What’s the weirdest thing that’s ever happened to you during a gig?

I had a bra thrown at me once.

But it was Misty so…

You seem like a very modest person, we can’t say the same for a lot of DJs here…

Yeah, ego is a big part of it. It started off as very competitive, I felt like it wasn’t too friendly and then the other problem with the DJ scene is when the trend started moving away from commercial sounds to things like Deep House, everyone sounded pretty much the same. To be honest though, now it’s getting a lot better and DJs are developing individual identities for themselves.

Do people still steal your tracks?

Haha, yeah, it used to happen quite a lot and it used to bother me back in the day, but ultimately they’re not my tracks to begin with. It’s not just about track selection, it’s about a certain feeling that you’re trying to convey to the crowd. You can play a great track but it can sound like shit in a set. Likewise, you can play a shit track that sounds amazing in a set. Good tracks don’t make a DJ. Anyways, you can’t keep your tracks guarded as much anymore.

Do you still get requests?

Did you have any Enrique, but didn’t want to share with them because it was yours?

Haha. I think most people these days differentiate music as dark or mish dark. Before, it was about vocal or mish vocal.

Who’s your favourite DJ in Egypt?

When clubs call you and ask you to play a different type of music do you take the gigs?

No. At first, I tried to make sure that the people who are booking me know exactly what kind of music I play. I think people know more what I’m about though, thankfully. I care about what kind of line up I’m part of, though, just for the sake of the night, so I don’t play something completely different to the person before or after me.

What type of music do you listen to outside of House music these days?

It probably revolves around a few bands like Depeche Mode, Radiohead… I was a grunge boy growing up so I listened to a lot of Pearl Jam, Soundgarden, too.

Last week we downloaded Traktor 2. By Egyptian standards, does that make us DJs?

Haha, no it doesn’t. Traktor only helps to beat match and, to me, that’s not DJing. Your mixing skills are involved a lot. There’s a difference between DJs who are good track selectors and those who create a journey with a good flow; someone who creates an experience and accordingly so you don’t really focus on each and every track, rather, the experience. That’s the toughest thing about being a DJ, creating a flow. Having said that, to answer your question; whether you drive an automatic or manual doesn’t define what kind of driver you are, good or bad…

How long does it take you to prepare for a gig?

Do you have any superstitions? Something you do before every gig…

Tell us about your relationship with Marc Wahba.

He looks after me, haha! I need looking after. He has a fantastic view of the scene in Egypt. He handles my gigs and contributed a lot to any success I’ve had. He helped people get me heard and gave me the right advice when it was needed.

Are you going to start producing your own music soon?

I used to produce back in the day, and recently took the Epic 101 course with Hussein Sherbini. He’s a great teacher, and soon, I’m going to get more into it when I feel like I have something to offer.

Who are your favourite producers in Egypt now?

Okay let’s say one of the Moderat guys call and he says, “Hey Aly, I’ve got a gig for you at the Berghain. We’re going to warm up for you, but you can’t bring Marc Wahba”… Do you take the gig?

Hahaha, you know I live with the guy?

Moderat says you’re not allowed to live with him anymore, you can’t be friends….

Okay you’ve skipped the gig, Moderat call up Marc, they’ve asked him to be their manager. He takes the job, what do you do?

Okay, what advice would you give to DJs starting up?

Stay grounded. Don’t let your egos get the best of you, be grateful that you’re getting paid to play music, but you’re not saving lives, so mellow down.

We can also exclusively reveal that Aly B FINALLY has a Soundcloud! Listen to a teaser of what's to come below, recorded especially for Scene Noise.