5 Breathtaking Hiking Trails in the Middle East and North Africa

Explore lush hills, snow-capped mountains, verdant valleys, and even canyon waterfalls with our pick of five of the most exhilarating trails traversing the region… 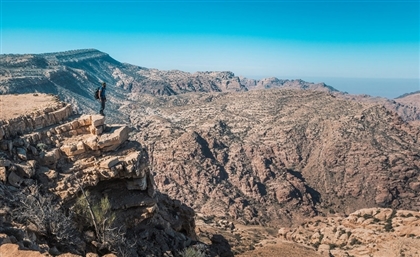 From day walks to ruin roaming, the Middle East and North Africa offer a plethora of trails traversing diverse landscapes, and often running through (or to) rich cultural heritage sites.

Stretching for 470 km from Qbaiyat in north Lebanon to Majaayoun in south Lebanon, this rugged trail meanders through snow-capped mountains dotted with Ottoman castles and Roman temples carved into cliff faces. Hikers are treated to sublime views of the Mediterranean, an ancient cedar forest and olive orchards. The trail can be hiked in sections but if you want to fully immerse yourself in the experience, stay at one of the charming stone guesthouses or monasteries along the route.

This unmarked 80 km trail traverses through rocky desert, dramatic gorges, canyon waterfalls, jagged mountains, escarpments and wadis before emerging at the ‘back door’ of the rose-red city of Petra with its delicately carved facades and rock-cut architecture. Camp in Bedouin tents set against dramatic desertscapes and be prepared to forgo showers if the canyon waterfalls are dry.

Egypt’s first long-distance hiking trail, the Red Sea Mountain winds through 170 km of little-visited rugged mountainscapes. With dramatic gorges and craggy mountain ledges, this trail is a challenging hike but one well worth the effort. Although the trail is relatively new, it is actually an extensive network of ancient routes used for centuries by Bedouins. The whole trail is owned by the local Maaza tribe and seeks to generate jobs and preserve Bedouin culture.

From the plateau to Jebel Shams’ summit, this jagged trail is resplendent with sublime, rocky scenery. Climb 1000 metres up to the top of Jebel Shams, Oman’s highest peak, to relish in a dizzying view of Oman’s Grand Canyon, Wadi Mukhtar, framed by striking craggy peaks. Apart from the awe-inspiring views, hikers will amble past the abandoned village of Sap Bani Hamis, featuring an ancient stone cistern that still collects rainwater to this day.

Deep in the heart of Morocco’s Atlas Mountains, this circular route takes hikers on a whirlwind loop around the highest peak in the Arab world, Jebel Toubkal. Walking in the footsteps of the native Berbers who have trodden this path since antiquity, hikers pass through oasis valleys, panoramic ridges, mountain passages and ancient villages. Discover hidden lakes, stunning snow-capped mountains and soaring birds eye views, spiraling above the clouds.

Situated on Sinai’s southern coast, the Ras Mohamed reserve is famed for its [...]

In the upcoming weeks, Air Cairo will operate two flights a week from Banja Luka [...]

In honour of its 117th anniversary, the Heliopolis Heritage Foundation is putting [...]

Unravel the wonders of Islamic architecture with some of Cairo’s most striking [...]
Week Month Year