With a unique eye for the bigger picture, as well as the tiny, minute details, Egyptian-Korean, Alexandria-based New Yorker photographer and filmmaker Abdelrahman Gabr has certainly captured our imagination. Here he talks Egyptian inspiration... 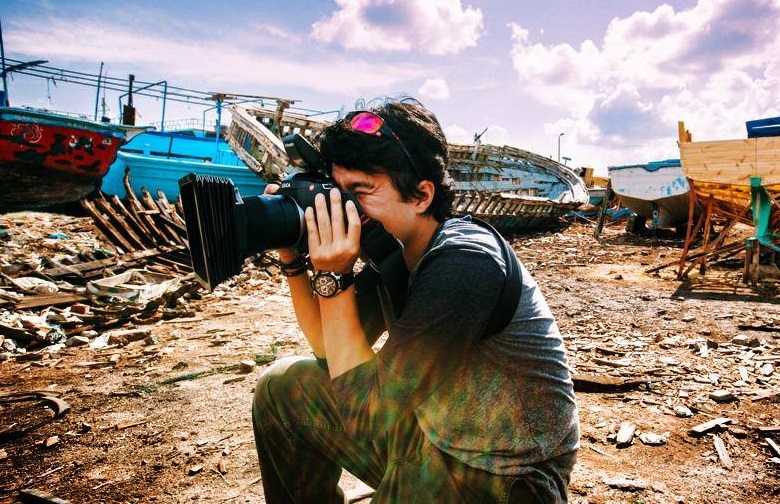 Abdelrahman Gabr of Koree Films documents the people and places in Egypt with a profound lens, purveying a certain magic in every shot, inspiring wide-eyed patriotism for this chaotic, ancient civilisation. The half-Egyptian, half-Korean, American-raised, Alexandria-based filmmaker captures the spirit of specific Egyptian cities through an incredibly cinematic visual rhetoric. His short film Mini Cairo manages to portray the hustle and bustle of the capital as if it were a tiny Lego town whilst The Glassmakers focuses on a very special Egyptian personality, one of the only people keeping the craft of glassblowing alive since the Ottoman empire. His portfolio acts as a beautiful time capsual that blends historic culture with modern day living, almost becoming the ultimate tourism propaganda for Egypt. Gabr's latest short, Aswan, is part of an ongoing project entitled Faces of Egypt, a soon-to-be-released book containing the multitude of people Gabr has met and shot on his journeys....

Tell us a bit about yourself, where you grew up and studied...

I was born and raised in Queens, New York. Mum is Korean and Dad is Egyptian. After 13 years in the US, my family moved to Alexandria, Egypt. It’s another city with diversity of nationalities and religion but with a Mediterranean flavour. I finished high school and went to study Computer Engineering but never went into that field as I always wanted to be a director and photographer.

Do you think you would have been as enchanted by Egypt if you had grown up here?

That’s a really great question. Maybe, but I think in my case having a multicultural background with both the Far East, the West and the Middle East in your upbringing makes you look at the world from a different angle, accepting everything and everyone which is different. Also growing up somewhere and just hearing stories about your homeland is a totally different experiences than being born there. Once you arrive you see things totally different than people who live there and take day-to-day life for granted. I think this is what set me apart from other Egyptians I know as it made me more perceptive to how special Egypt is and how unique its people are.

How did you get into photography?

All my life I wanted to be a director. When I was a small kid, my dad had bunch of cameras and video cameras around the house, so by default I fell in love with it.

What equipment did you start with and what do you use now?

My first camera was a Canon 5D MK2 and a 50mm lens; that was three years ago. Now I use many cameras like Canon 5D MK3, Sony Alpha MK2, Sony Alpha A7s and the Leica S system.

How did the Faces of Egypt project come about?

After the revolution in Egypt, I wanted to show the country to the world via my eyes instead of the news on TV, so I decided to make a time-lapse movie, and during my travels to these exotic locations, I met so many people and saw how they lived. One day, in this location in Sinai, I woke up very early in the morning preparing for a time-lapse shot, then suddenly I saw a couple of women carrying huge pots on their heads, walking up a huge hill and the sun was right behind them, and BAM, the idea came right to me. I know there are dozens of books out there about Egypt, but I wanted to capture the people in a very cinematic and natural way. My goal is to make a unique book of the people and to record their traditions and customs through images. As time passes, all this will fade away and some day the cultural traditions we see now won’t be around any more. I still have a long way to go to finish the book. I’m still in the beginning of my journey, as I have to cover Egypt from the borders of Sudan all the way to the Mediterranean Sea.

How many faces roughly have you captured so far? Do any stand out?

So far, around 50. Hopefully, after publishing my book, I would love to make an exhibition of these extraordinary people with their amazing stories.

How do you choose the subjects you shoot?

Usually I go to the elders first, get to know them and listen to their stories. Once they gain your trust, it’s easy to select subjects as you have the permission from the elder. I usually go to the locals and try to see people with origin stories of the location.

Is there any specific technique you have for making the subject act naturally in front of the camera?

With the people I met so far, no. I just direct them a little and they just do the rest. Sometimes I just observe their movements and if I like something I just ask the subject to do exactly the same thing again. For example, I met these three little girls in Aswan, and I was shooting one of them near the river and suddenly I found the other two sitting next to each other and one of them putting her arm around the other girl. I just stopped what I was doing and told them to stay they are. It's best when the subject is comfortable the way they sit or stand.

What has been your favourite place to shoot in Egypt?

Mini Cairo... What kind of preparation did you take for each shot in order to make it seem like a small toy world?

The trick is to find a nice movement in front of you and try to capture from a bird's eye view, which is kind of a  -45 degree angle from above. I didn’t use tilt shift lens so I had to do this all in post-production, but it was an experimental project. I am planning to do another one with proper gear.

Was there a concept or message you wanted to purvey with Mini Cairo?

I did a movie of Alexandria and all other places in Egypt but not Cairo, so I wanted to do something new, not another normal time-lapse. So I thought of making a tilt shift time-lapse, which was a perfect idea for making a city as large as Cairo into a small, tiny cute one.

How much importance do you put into sound with your films? Who produced the music for them?

I am very picky with the music I put in my videos. No one produces them, I license all my music from a site called MusicBed.com which gathers a large group of music composers and artists.

What advice would you give to budding Egyptian photographers and videographers?

I was self-taught; you can find everything online these days. Set a reasonable goal in your mind and try to make the best of it. Hard work pays off.