Ant-Man: An Animal For All Ages and Places

Contributing columnist Emad El-Din Aysha delves into the themes and analogies presented by the latest animal-inspired superhero flick, and finds they aren't too far away from home... 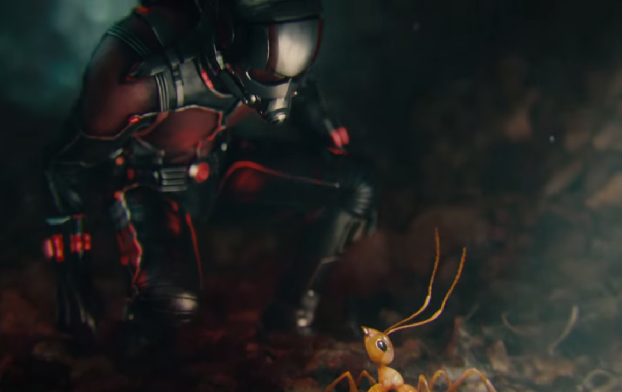 Ant-Man (2015) is moving into some new theatres here in Egypt, and rightfully so. Not only is it a tremendous amount of fun, exciting, well-paced and well-written, its analogies and themes speak to the Arab world too.

A cat burglar, Scott Lang (Paul Rudd), formerly trying to go straight, steals a suit that shrinks him to the size of an ant while exaggerating his strength. Little does he know that he was meant to steal the suit by its inventor Dr. Hank Pym (Michael Douglas), a scientist-businessman who used to be a super-hero himself. Hank needs Scott’s help to foil the evil ambitions of fellow scientist-businessman Darren Cross (Corey Stoll) who has reinvented the technology and wants to go global with it – selling it to mercenaries and coup plotters. It won’t be long before terrorists get hold of the legendary ‘Pym particle’ and all hell breaks loose.

Both Scott and Hank have estranged relationships. Scott spent a stint in prison for hacking into corporate America and redistributing some wealth and now can’t find a job after leaving prison, not even selling corporate ice-cream (his former crew are all minority types). All he can think about it patching things up with his infinitely cute baby girl Cassie (Abby Ryder Fortson), his ex-wife Maggie (Judy Greer) and – to a lesser extent – her new husband, detective Paxton (Bobby Cannavale). As for Hank, he spent too much time away from his own daughter Hope van Dyne (Evangeline Lilly) while saving the world, and lost his wife in the process, a fellow shrunken super-hero. Even Hank’s relationship with Darren has a love-hate quality to it. He was his mentor. In one key scene Darren asks Hank why he turned his back on him and he says that he reminded him of himself too much.

Corey Stoll is perfect for the super-villain role. He’s muscular enough and his bald head, slightly pointy ears and nose make him look like cunning and devious rat too. Evangeline Lilly is given dark hair here with a short, serious looking haircut, so she looks like the independent type, while Bobby Cannavale really looks like a flatfoot. Paul Rudd has a geeky but physical look to him too and you sincerely believe that he wants to be a hero to his daughter. Michael Douglas, with the beard and grey hair, is very scholarly here and he gives a solidly emotional performance too. Abby Ryder Fortson, apart from being adorable, does actually look like she’s related to Paul Rudd. Even the ants in the movie are perfectly cast and you feel sorry for Aton when he gets killed in the line of duty!

There’s plenty of themes on display here – science and ethics, money and power, and how parents are heroes to their kids – but what’s surprising about all this is how relevant it is to us here in Egypt.

No kidding. We’ve been forced to put up with Adel Imam ‘dramas’ in three Ramadans in a row, and in each and every one he plays essentially the same character: the domineering father figure who can magically solve everything, by hook or crook. When I was teaching at the American University in Cairo, one of my students did her essay on a selection from the novel Jaws – I’m into that kind of thing – and she loved the Brody character, noting how different he was from the hapless, law-abiding klutz (Roy Scheider) in the movie version, solving problems in a ‘fatherly’ manner. More specifically he solved things behind the scenes, through personal arrangements, like keeping the news of a shark attack out of the papers. You’d think we’d got out of that patriarchal phase with the revolution, then the ex-president got out of prison.

In Ant-Man fathers are flawed people and it is their kids’ faith in them that drives them to overcome those limitations and become good people. Hank owns up to his daughter about what happened to her mother and Scott comes to accept Paxton as someone worthy of being the head of what was technically his household, since he cares for Cassie and tries to save her life when Darren goes after her in his own scary-looking ant miniaturisation yellow jacket.

So why ants? Read that timeless classic with its daring-do rabbit ‘tails,’ Watership Down (1972), and you’ll find the answer. One heroic rabbit, Bigwig, describes a rival warren as a bunch of ‘ants’ led by a ‘dog.’ The mindlessness of armies is alluded to in the novel, with reference to the Crusaders. And the author, WWII veteran Richard Adams, was once stationed in Palestine!

The original rabbit warren in the story has a Chief Rabbit who rules through the elite guards, the Owsla, whose job is to forage for choice foodstuffs (carrots, cabbages and lettuce in gardens and farms) and watch out for predators and men with guns. So hierarchies develop thanks to specialisation, with someone at the top to manage the process; picking those fit for sentry duty and earning their loyalty through privileges and patriotism.

Patriarchy again. But, fortunately, some rabbits – lead by Hazel and Bigwig – rebel when they sense danger. The Chief Rabbit won’t listen to them and wants them silenced. Later they almost join another warren where the rabbis are all well fed but have no king or sentries. The reason is that they’re been fattened for the slaughter. A nearby farmer provides them with food and hunts off all the predators, so there’s no need for specialisation and authority, and the rabbits go along in a kind of conspiracy of silence. They never ask about the rabbits that go out and never come back (They get snared). Eventually Hazel and friends establish their own warren and contact a nearby colony – Efrafa – to get females, only to get into a war with them when they find that their head rabbit is a dictator called General Woundwort (the one compared to a dog). He’s a feral rabbit who took over a warren by killing its leader (rabbits do that kind of thing, in the Greek tyrant-slaying tradition apparently). He keeps the whole rabbit population underground in the daytime, supposedly to avoid detection by humans, prevents his rabbits from communicating with each other, trains his sentries personally and has obedient officers to issue his orders. Rabbits see everybody as enemies (the ‘Elil’) but Hazel and his band learn to make friends with other animals and it’s these alliances that save them at the end of the day.

It seems Adams wanted to pass on the lessons of the War, how England could have ended up like Germany but made a concerted, conscious choice not to. You can see this in Ant-Man too. Scott runs with the ants like it’s a wolf pack but is told that he can’t command them unless he’s honest with them.

This is like Kalila Wa Dimna, where Arab storytellers used animal fantasies to get away from censorship and talk about ‘big’ issues – politics, morality – in a way that normal, often illiterate peoples could understand and relate to. So, like I said, we really do need to watch Ant-Man, for our own good. I’ll let you guess in what way!