After sparking global debate and inspiring women across the world to document their daily confrontation with sexual harassment, Tinne Van Loon and Colette Ghunim's infamous video is part of a bigger project, The People's Girls. Valentina Primo meets the change-makers to find out more... 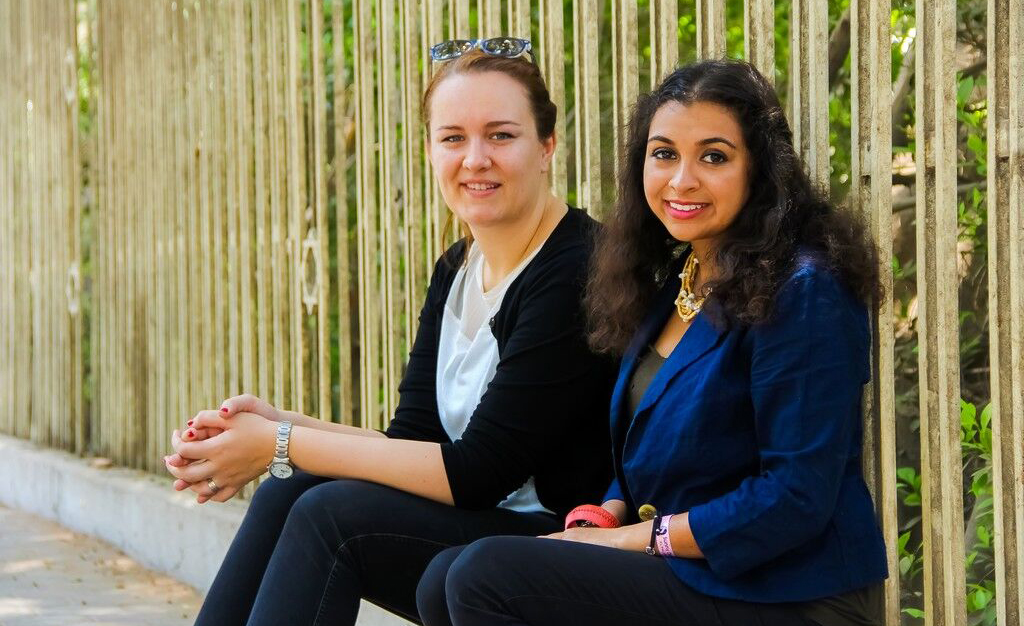 They sparked global debate and put sexual harassment on the map. As their video Creepers on the Bridge spread like fire and was imitated across the world, women from New York to Stockholm shared what it is like to walk the streets of their cities to the lacerating stares of men. The topic reached 40 million viewers, and sparked policy change. And it all started in Egypt.

“We wanted to capture the feeling of being stared at and cat-called in the street, where I was walking on a bridge in downtown Cairo while pretending to talk on the phone,” says Colette Ghunim, one of the young producers of the two-minute powerful clip they created as part of a campaign to raise funds for a documentary on sexual harassment.

The clip, filmed with a mobile phone as Ghunim walks through Cairo, shows the haunting male gaze in slow motion to the sound of a catchy song called “Flirting Yes, Harassment No.” Two weeks after its release in September 2014, it peaked 1.4 million views and swiftly triggered a global debate that extended across the world, as international media flocked to interview Ghunim and her partner, co-director Tinne Van Loon.

Creepers on the Bridge from Tinne Van Loon on Vimeo.

Intriguing, entertaining, and extremely powerful, the video was replicated by women across the globe and inspired American organisation Hollaback to create the globally viral 10 Hours of Walking in NYC as a Woman, which reached a milestone 40 million views.

Their video is a part of the ongoing documentary The People’s Girls, a project that aims to shed light on the epidemic of sexual harassment in Egypt, which affects 99.3% of women in the country, according to UN Women. “It was interesting to see how some people reacted to the video, saying that there was nothing strange about it, or claiming that the woman walking was probably wearing provocative clothes,” says Van Loon. “That shows to what extent the behaviour is considered normal.”

With their documentary still in progress, the young producers aim to use the power of viral videos to change perceptions, sparking debate on the role society places on women, and create real, tangible change. Thanks to the spoiler’s virality, their crowdfunding campaign launched in 2014 successfully raised USD$27,000 to fund their documentary. “Viral videos are a method that is changing not only perspectives but also policies. After these viral videos spread, ordinances were put in place in many cities across the USA to penalise sexual harassment,” says Ghunim. It was a viral video, too, that led to a law penalising harassment in Egypt, when images of a woman being assaulted in Tahrir Square for the celebrations of President Abdel Fatah Al Sisi’s inauguration in 2014 spread across social media.

As the topic populated international and local media throughout 2014, Van Loon, a 27-year-old documentary filmmaker, considers this year as the time for women’s stories to come to light. “Harassment is a problem that, as a woman, you cannot escape as soon as you're out the door. But when I was researching, I didn’t really find documents where women were telling their experiences, especially on how it affected their lives,” she says.

10 hours of walking in NYC as a woman, the viral video inspired by Ghunim and Van Loon's clip.

“In Egypt, when people think of sexual harassment, they still think of the mob assaults in Tahrir Square. And while they are a huge problem, the smaller episodes in the street are a bigger issue, because you can avoid going to super crowded places but you cannot avoid living your life,” she adds. “The fact that doing the smallest thing, like going to the supermarket, implies going through this has a long term impact on the way a woman makes decisions her whole life. Women end up seeing every man as a potential threat”.

Throughout their research, the producers also focused on the social constructions in the collective mind that allow harassers to normalise their behaviour instead of conceiving it as a crime. “One of the most interesting testimonies is that of a harasser’s mother, who says women who do not wear loose clothing are asking for it. So how do we expect their children not to feel entitled to do it?” says Van Loon. “This has much to do with the roles being put in place in society, with the power men exert over women and how they are perceived as an object for men’s pleasure and entertainment; and we are not only talking about Egypt,” Ghunim adds. Media and cinema have a considerable role in the portrayal of behaviours considered legitimate for men to have, she considers. “Many Egyptian movies portray women as garbage,” she says. “Slapping and mistreatment is normal; and that is the reflection of what is the norm in society. The good thing is that after harassment, girls who file complaints are invited to talk shows, so that starts a debate.”

An over-debated topic for many, a broken taboo for some; is there still room for an impactful message? “What makes it different is that we are focusing on bystanders and the power they actually have,” Ghunim says. “The crime rate in this country in relatively low, especially because people get involved. Wherever you are, if someone screams ‘haramy’, half the street will be running after him. They are quick to react, so if the instinct is there, why is it not applied to harassment?,” Van Loon asks.

The documentary’s title, The People’s Girls, plays with the multiple meanings the phrase elicits, as it is an English translation of a popular Arabic expression. “People say ‘bint el nas’ to imply that a woman is cultured and educated, but these are the women getting harassed anyways. At the same time, it also means ‘all the girls’, as in all of them should be respected,” she adds. Through a call for participants issued in December 2012 and spread through women NGOs, Ghunim and Van Loon had several rounds of interviews with people interested in sharing their story, be it harassers or victims. Aiming to conclude filming in September, and launch it at a film festival in Canada, the producers are still on the outlook for on-the-spot scenes of street harassment, which are more difficult to capture than the testimonies of those who decide to speak out.

“People are now more able to talk about it, whereas before it considered a taboo,” Ghunim says. “More woman are now speaking out and there is more awareness that it is a crime. That’s part of our message too: if things are changing, it is because by filing cases, or simply responding. Women are claiming their right back.”