The Fringes: The Fraying Wonders of Aya Sharkawy's Poetry

Poetry has come to force itself on social media, but this Poet seems to think it's the other way around. 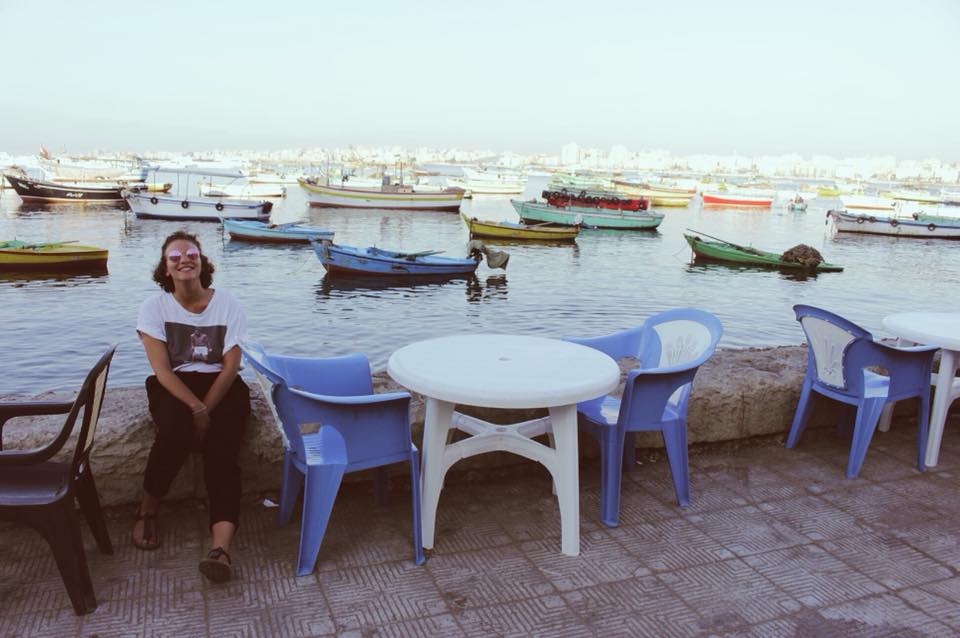 "The second law of thermodynamics, the law of entropy, ominously announced in indisputable scientific terms that everything is in fact deteriorating. This is the most terrifying scientific given I have ever come across. This is why I write."

Aya Sharkawy, who publishes on her personal site, Fraying Wonders, is a graduating senior studying anthropology at the American University in Cairo (AUC), and a Poet whose wits had already made for a riveting car-ride to our interview spot: the parking lot of the campus in which she’s currently writing her concluding remarks. In a few months the real world is her oyster, but right now is the time for us to sit in car parks and reflect on her process of becoming. Other than her talent and tactful strumming of language, emotion and imagery, it was perhaps her place in the world that attracted me to her poetry: a student and a woman who has a ceaseless ability to find possibility through her words.

Her poem, my personal favorite, Slow Boil, reads as a reflective yet playful critique of the making of gender, and the entitlement of men. Another, Hands, is at peace with her own vulnerability and desire, yet holding the possible violence of a seemingly loving touch at bay. It is the seeming ease by which her words read uncirculated in the rising market of insta-poetry and poetry “machines” as she calls them. She has not been bestowed the title “Poet,” by more than a group of friends and the often-stumbling stranger. She gave it to herself, and she owns it.

“I don’t know why I always have this hesitance to claim the title, it’s like this irony when it comes to it, like it’s hard to call yourself a poet,” she told me, noting the capital P I voiced and the air-quotes I used to surround the word noting an earlier conversation we had. “I write poetry. that’s easy for me to say, but to call myself a poet makes me feel like I’ve earned something. I feel like someone has to come hand it to you. Like: ‘you are now a Poet.’”

“But I’ve been recently trying to own it.”

She said that poetry “has only recently become a widely appreciated art-form, at least in Egypt.” Poetry has in fact been left out of pop-culture for more accessible and swiftly consumable art-forms like music, or visually condensed like television and film. “No one will say ‘oh, I don’t like music,’” she tells me, “but people say that about poetry. They say things like ‘oh I don’t like poetry’” or “’I don’t listen to or read poetry,’” and that this has made her feel like she was trying too hard.

Even recently, television and film are competing with other bite-size forms of art-consumption like video and social media stories, where the audience is presented with quick-paced doses of content in 3-minute packages. Poetry is stacked in smartphone-legible font-sizes on squared images that are quick to share and easy to forget.

What changed with insta-poetry, according to Aya is that it has made poetry a shared thing. She noted the presence of the slam-poetry community, The Word Project, as something that has made poetry more accessible to people, especially those who perform and write poetry. Aya’s first performance was actually at The Word Project, her poem Only Art¸in which she brought to light the depoliticization of the art-object. She told me she had gunned for a degree in art-history, but that “One of my [her] main issues with doing that was: arts are so apolitical or they’re apoliticized. Like, just the fact of them being apolitical is an act, like they’re being made apolitical and so that is political,” a critique she later expounded on while reflecting on Insta-Poetry.

Aya Performing Only Art at The Word Project

“Before this mini-revolution in the art-scene,” she explained to me, “poetry was mostly these white dudes published in books, and that was your only access to it.” She hadn’t intended to belittle these white dudes, some of which have written some of her favorite poems, or their contributions. But she noted the dedication it takes to read their work, and she sets apart slam-poetry saying that “when you watch someone perform a poem, and you see them go through the feelings and, like, the whole point is to make you feel them. but you see them doing it for you: kind of going through the emotions.” This, to her, makes the poem a different experience. It’s only a component of a bigger act, I would add.

“In this day and age, we’re so used to having emotions given to us prepackaged.”

Aya lives with us in this day and age. She is youthful and in touch and tune with the world around her. She shares memes, has been called ‘woke’ albeit for her own critique of the trend, and her love for Harry Styles is the only thing stronger than her opinions on insta-poetry and the rise of the Rupi Kaurs around us. “And, definitely with Instagram and Youtube, we want visual content. I want visual content, I’m very attached to the image and to art, and so to pair that with poetry: to pair performance or visual content with poetry, they complement each other really well,” she disclaimed.

She maintained that the directness of a poem can make it annoying. In that sense, packaging a poem in simple words that are vague enough to let the reader project whatever emotions they have onto them, can make the poems feel like cheeseburgers. You may be lovin’ it, but you’re not getting half the nutritional value you need from its plastic cheese or soy burger. And, unlike a cheeseburger, a Happy Meal Poem can only carry so much emotion to her mind.

Kaur's poetry is indeed heavily reliant on its distinguished vagueness. And the internet is not stupid. Bad and Boujee, A Popular Mumble-Rap Song Imagined as a Rupi Kaur Poem by the Internet

A Happy Meal Poem is barely a meal, but it’s happy enough to make you think you’ve had one. On social media, the poet is always scrambling for a slot on your timeline and working out through trial and error the best ways to disrupt your short span of attention. Aya speculates that this places a contract between the poet and the audience, rendering the former precarious and the latter alienated. “And it becomes not about feelings, not about expression, not about catharsis, and not about performance. It just becomes about giving the audience something,” she put it. Poets like Rupi Kaur are a prime example of this.

Because the poet is always in danger of losing your attention, the audience tips the scale, not as a community with an art-form it feels a visceral connection with, but as a mass of individuals with a product they’re alienated from that they’re still somewhat attached to. She compares it to a pop-song: “this formulaic creation which maybe does evoke a feeling but maybe that’s because it’s vague. Not because it’s good.”

She explained that there’s “just this kind of vagueness that she [Rupi Kaur] utilizes, maybe as a talent and maybe out of laziness, and maybe it’s because she has the pressures that come with being that successful,” and that includes the pressure to “create at a certain pace to stay relevant, to stay big.”

“I have a poem that specifically deals with that, [Only Art], how we make these poems, we make these photographs, we make them all abstract and we take them out of context and all of a sudden they lose all value: they become apolitical.”

In contrast, Aya appreciates that she has “the luxury of not needing to do this for money,” and followed saying: “this blog is mostly for my own purposes, as much as I love the validation and the attention and all of that shit, it’s amazing, but it’s still for me. And I want to say, and I really truly believe, that it’s important to keep it as something that is personal for the artist, because that’s the only authenticity you have, not to fetishize this idea of authenticity and purity.”

But the only well that you’ll ever be able to dip into authentically is yourself.

"I WILL NOT MAKE ANY MORE BORING ART" John Baldessari's I will Not Make Any More Boring Art, 1971

Aya maintains a visceral attachment to the words she writes, and so she’s selective with those she decides to share. Her process of writing is more affected by her personal (and political) experiences than where she stands vis-à-vis the whimsical algorithms that move around our words online. Yet, it is always a novel feeling when a stranger stumbles upon her blog and decides to text her about it. “I go crazy,” she told me, and it makes her want to write more.

But she explains to me: "I have the luxury of not needing to do this for money."

Aya knows that under a spotlight, a poet becomes subject to deadlines, posting times, the visual, rendering the work pornographic and sensuous, rather than reflective and intellectual. Emotion is a major component of her poetry, whether in the sense that she would openly discuss a feeling or an affective experience, or in that she would evoke you to smile, flinch, flutter or frown with an image, an anecdote, or a snarky metaphor. Her poems are both technically dense, and emotionally fulfilling, because she does them for herself.

What poses a struggle, however, and she noted that in our concluding remarks, is that when you call yourself a Poet, people require you to prove it by constantly producing. But her Baldessarian commitment to never make boring art keeps her in check. “Other than the fact that it’s a lot of pressure, it’s just not conducive to good art. If I’m writing something because I have to then I’m not doing it for the reasons you want, and you won’t connect to it the way you would to something that was genuinely crafted.”