Film Review: The Osiris Child (2016): Everybody Deserves a Second Chance! 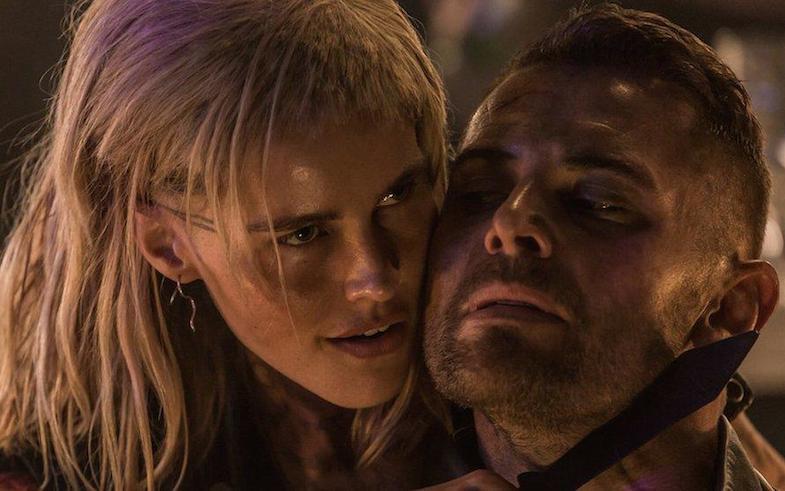 I almost didn’t watch this movie. The title looked a little suspicious – Science Fiction Volume One: The Osiris Child – and the cast from the trailer looked a little bit too cute. But the visuals and technology looked stunning so I thought it was worth a try.

It panned out. It’s a rich movie that has a lot going for it in more than one department. The story, half of which is told in flashbacks, is of a disgraced former fighter-pilot (Lt. Kane Sommerville played by Daniel MacPherson) trying to save his little girl on an off-world colony being overrun by a biological weapon concocted at a prison facility. (Slave labour is how the colonies spread so fast, and the ex-military types who run the prison system just had to do a little tinkering with human DNA, producing a monster to help them devour more planets for profit). What ensues is an action-adventure where the nominal hero befriends an escaped convict – Sy Lombrok (Kellan Lutz) – on his own journey of redemption.

It’s good to see the Aussies are back with their brand of rough-edged science fiction, sorely missed from the Mad Max days.

I wouldn’t say it’s perfect. The creature effects were very lifelike but not inspired and the CGI was a bit too good for its own good, but it’s a respectable piece told in an innovative way – with chapter titles and humorous asides – and with a fair amount of good acting along the way. The morals of the story are exquisite and the look is both glitzy and grimy enough where required. If there’s a volume two and three on the way, I can’t wait till they come out.

It’s good to see the Aussies are back with their brand of rough-edged science fiction, sorely missed from the Mad Max days. There are also some Arab components to this minor epic. The poster has the Al-Thani tower in the background and one of the actors is an Arab. The themes are also post-9/11. The planet is almost a ‘desert’ world (hint, hint) with domestic spying thrown in there. Kane wants to find out about his ex-wife’s new boyfriend and uses the internet to do this, till all communications are shut own to hide news about the disastrous prison break. (Media management despite the information superhighway and global village of satellite news).

Even the flies on the planet are called ‘spies’. The bioweapon creatures ‘sting’ their victims, altering them into fellow monsters, meant to signify the ruthless world we’re living in where you have to become a monster to survive the rat race.

That’s the First World/Third World divide for you. The great powers have to learn to be more forgiving and the downtrodden of the earth need to learn to better themselves in the meantime.

The irony, of course, is that the prisoners are actually the more humane – they stick together and make sacrifices for each other, even at the sake their personal dignity. It’s also notable that the good guys are predominantly white and blond while the bad guys are darker haired and racially mixed. The impression you get is that minorities made a pact with the devil to get the good paying jobs and to get even with the rednecks. (Sy’s lawyer is black and the guy he killed is very noticeably blond, whereas Sy’s wife is Asian). It’s also notable that the good guys are predominantly white and blond while the bad guys are darker haired and racially mixed.

Religion is a theme here too since the prisoners are the ones who believe in an all-forgiving God, whereas the prison warden (Temuera Morrison) only believes in having the power of life and death over others, using religion to control them. The military company that runs the prisons has a cross-like logo that almost looks like a Swastika. It’s also thoroughly multinational – the general, Lynex, (Rachel Griffiths) while white, eats using chopsticks and drinks tea out of Japanese teapots.

The warden, when he gets killed by one of the creatures, thinks he can make it obey him because he created it – forgetting what happened to the last mad scientist who played God, Victor Frankenstein. And he considers himself morally superior to the inmates because he also had it tough growing up.

Family is a theme too. The criminal duo who help Kane and Sy out are the inbred, related type, and the same can be said about the arm dealers who sell Kane weapons. (Compare that to the army men who fire on civilians while attempting to defend them against the creatures). For all their faults these criminals are always there for each other, whereas Kane wasted his life away pursuing his career. Even when he spends quality time with his daughter, it’s at target practice.

Hence the little girl, Indi Sommerville (Teagan Croft). The movie is called ‘Osiris’ Child, since the ancient Egyptian god Osiris was the lord of the underworld who decided who went to heaven or hell for their sins, and he himself had to die before he could be resurrected. You have to believe in redemption for it to happen.

Indi (for ‘independent’?) never loses faith in Sy, even when he gets stung himself. The thing the DNA designers didn’t count on is the fact that the experimental batch they used to produce the creatures are convicts. Sy is a prisoner but he’s not an evil man, and so he doesn’t end up a ruthless killing machine. It was his lower class status, as a ‘nurse’, that got him where he is. Kane messed up bigtime too but his good reputation as an obedient soldier saved him from prison. Kane could very easily have ended up like Sy.

That’s the First World/Third World divide for you. The great powers have to learn to be more forgiving and the downtrodden of the earth need to learn to better themselves in the meantime. Couldn’t have thought of a cooler way of working it out on the silver screen!!!