The most talked about film of the year, Alfonso Cuaron’s Gravity already has rave reviews. Resident film-buff Wael Khairy explains why it's not just a cinematic triumph; it's an inspirational look at the nature of humanity. *SPOILER ALERT* 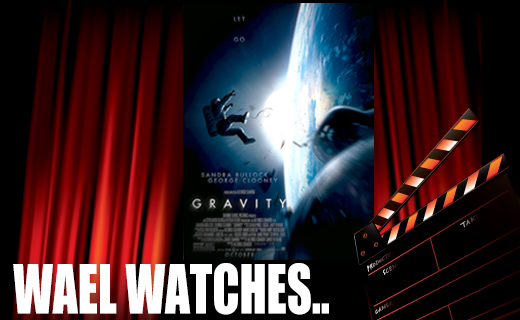 Alfonso Cuaron’s Gravity is shaping up to be the best-reviewed film of the year. The bulk of the praise is going to the groundbreaking photography and Sandra Bullock’s moving performance. As the posters will let you know, everyone in Hollywood is over the moon for this film. Some have been calling it the best space film ever made. Quite frankly, I’m not so sure they got the whole point of the film. It does portray space in a very realistic manner, but it’s far from a “space film.” In fact, it’s more of a psychological drama; it just happens to be set in space.

Gravity is one of the most inspirational motion pictures to come out in some time. It hits a chord with the subconscious mind and it’s not because of the master-class of cinematography unraveling before your eyes (it does help though), but it’s because it aims to teach us something about humanity. Gravity is about that precise moment you choose to move forward, the moment you choose to let go of the sorrow that has eclipsed your life for far too long.

The plot unfolds with our two main characters in space. Right away you get to know the type of people they are. Ryan Stone (Sandra Bullock) is there to get things done and leave. She doesn’t take a moment to gasp at the beauty surrounding her. In fact, she seems kind of uptight. She wants to finish what she’s there for and get on with it.

Meanwhile, Matt Kowalski (George Clooney) floats around exchanging life stories with the space station in Houston. You can tell right away that he’s a free spirit. He’s the type of person who lives every day to the fullest; a guy with a million stories to tell and not a worry in his mind. When they hear of meteors potentially shooting their way, he reassuringly tells Stone to let the guys back in Houston worry about it. Stone lives to work, Kowalski, on the other hand, works to live.

Cinematically, this contrast in character is displayed in metaphorical shots of Stone stuck to a piece of machinery not that different from who she is; its sole purpose in life is to get a job done. On the contrary, Kowaski carelessly floats around like a free spirit. Curaon manages to fully establish two characters in a matter of seconds. The fact that he tells us everything we need to know about his characters using nothing but cinematic imagery evidently shows us that we are about to see the work of an efficient master, dominating his artistic form.

In perhaps the most horrifying moment of any film this year, they get a message: “Explorer, this is Houston. Mission Abort. Repeat. Mission Abort!” In a matter of seconds, a shower of meteors hit them in a breathtakingly catastrophic sequence. The usual soothing silence of space has never been portrayed more chillingly.

Stone follows Kowalski’s instructions and detaches, ultimately floating uncontrollably into blackness. The beauty of Alfonso Cuaron’s symbolic images surprises me with each subsequent viewing. She floats uncontrollably because she is not in control of her life. Kowalski on the other hand is complete control. He comes to her rescue and drags her back to the scene.

The metaphorical journey continues as they voyage to another space station. Kowalski asks about Stone’s past and if there’s anyone back home looking up at the sky, wondering when she’ll return, and we finally understand why she seems to have given up on life. No one is waiting for her.

We learn that she used to have a daughter but lost her in a playground accident. “All I do is work, and when I get home, I just drive. I was driving when I got the call, so ever since, that’s what I do. I drive.” One can’t help but feel sorry for her. The viewer misjudged her. It’s sad how we judge people not knowing what they’ve been through and how they came to be where they are now, but now we understand when and why she gave up on living.

We get the feeling that she has been grieving ever since. Coping with grief is the most painful of all human emotions, but it’s something we all eventually go through. For how long one gets stuck in sorrow depends on the gravity of the situation (no pun intended). Grief comes in many forms, be it divorce, or the loss of a friend you once held dear. Stone is going through the worst kind of grief, the death of a loved one.

Some people never emerge out of this state of mind; they linger in it and make it their home in what ends up being a very depressing life. It makes perfect sense, why she’s been stuck in this state for so long. When we unexpectedly lose someone, it is instantaneous but long lingering. It’s just how we naturally process the emotion. You don’t lose the person in one shot, you lose the person in small painful doses over time- when she goes to bed and stops hearing the cries of her baby, when her child’s scent starts to fade awayher clothes, when memories haunt heras she drives. It’s not easy to let go of things right away, but eventually it all comes down to whether you’ll mourn the rest of your days or learn to let go and move forward.

The first time Kowalski saved Stone’s life was earlier, when he told her to detach. The second time is in another post impact scene that mirrors the first. Only this time, the roles are reversed. He’s the one about to drift into infinite blackness. We see that he’s dragging her with him and the only chance for any of them to survive is if he cuts off the rope. In other words, Kowalski saves her life again through detachment. It’s not by preventing her to float with him into space, but by teaching her that sometimes it’s ok to let go, both literally and metaphorically. “You have to learn to let go,” he says. It’s a beautiful scene.

This is the turning point of our main character’s psychological journey. Stone works her way into a spacecraft and takes off her suit in a hurry. As she floats inside in her bare skin, her posture resembles that of an unborn baby floating in a womb. Stone is reborn. She may not know it yet, but she is about to start a new life. When she fails to get a spacecraft to start up again, she almost gives up again. We see her crying as she communicates with “another world.” We hear the voice of a baby. Stone lets it all out; she laughs, cries and howls like it’s in human beings’ primitive nature to do so.

In the following scene, just as she’s about to accept the fact that she’ll be stuck in this state forever, we see the return of Kowalski. It is clearly a vision and Kowalski is merely her mind pushing her to do what he tried to teach her when sacrificing his life for hers. “What’s the point of going on? What’s the point of living? Your kid died. It doesn’t get any rougher than that. It’s still a matter of what you do now. If you decide to go, than you got to just get on with it. Sit back. Enjoy the ride. You got to plant both your feet on the ground and start living life.”

Eventually she decides to fight for it. She guides herself through Kowalski. Her subconscious mind digs deep into her memory of what she learnt in boot camp. She gets the thing working and as she shoots towards earth she faces her final step.  “You'll see a little girl, with brown hair, lots of knots. She didn't like to brush it. You tell her I found her red shoe. She was so worried about that red shoe. And it was under the bed the whole time.” Stone is letting go.

The film ends with Stone crashing into the ocean. She takes her suit off once again and floats back to the surface. The ocean isn’t much different from space when you think about it, it’s uninhabitable, there’s no oxygen, and we hover in what feels like almost zero gravity. Cuaron grounds his message to our world. This could very well have worked as a tale of two people trying to reach the surface, thousands of metres beneath the ocean. The truth is, it is a psychological journey that can, and eventually will, happen to all of us anywhere, on any given day.

We see her break the surface. The mise-en-scene of the whole film has a greyish feel to it. In this particular scene, the colours are vibrant and lively. The journey is over and the future is bright. Stone struggles against gravity at first, but eventually she does the very thing her subconscious self (Kowalski) previously asked for. We see a close up shot of Stone planting her feet to the ground and moving forward.