Egyptians excel at body shaming. Whether its your grandma telling you you're too skinny or vile men on the street pointing out your flaws, women in this country find themselves abiding by other people's standards. Mona Daoud chats with the 23-year old artist that's saying to hell with that. 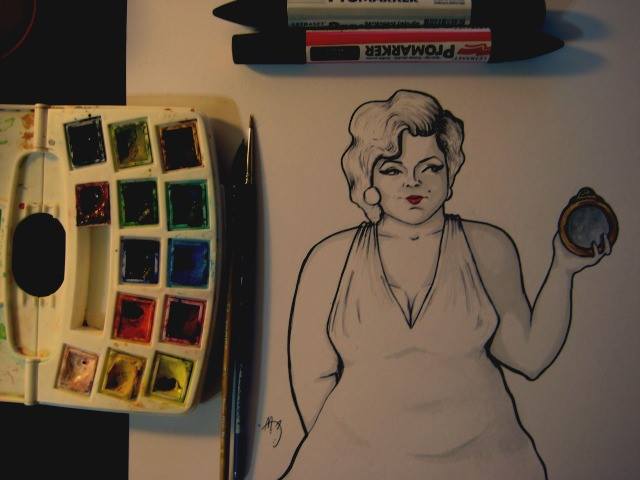 “One day, a passerby called me fat as if it were a bad thing,” says the curvy artist who happens to be of normal weight.

The 23-year old young woman was taken by surprise. It was the first of many surprises to come.

“At first people’s comments on the streets offended me, especially comments directed at women who are most susceptible to people’s attention, and are constantly expected to fill an image of perfection embodied in being slim.  Then, I started to focus on people’s, and especially my friends’, way of looking at curvy women, insisting that a curvy woman should lose weight and be very skinny as fashion dictates. Meanwhile I met people who praised curvy bodies with nostalgia for the past when that used to be the standard of beauty.” Who sets those standards, wonders Bassant El Qassem. After all it is not just curvy women who get harassed, but also skinny women who can be called ‘lizards’, while their curvy counterparts are called cows and barrels. “One day I snapped. I started sketching curvy, fat, and chubby women, who have every right to be the way they are, in confident poses showing that there is beauty there," she says, adding that she also sketches nude women of all sizes, getting criticism from those around her who call her art provocative and haram and that she is encouraging women to get fat and let themselves go. “People grant themselves the right to call me names just because I drew a naked woman. But I don’t give them a second thought.”

At first El Qassem would just draw for her personal satisfaction, using herself as a model sometimes, and using photos of people and her own imagination at other times. Then she realised that she needs to project her thoughts out to the world with the belief that “unless art gets through to people, we will never progress as humanity. Improving one’s environment by even just 1% is an achievement.” Hence she launched her Facebook Page  called ‘Love Yourself, You’re Beautiful’ as part of her artistic battle against body shaming, harassment, and misogyny. In one of the albums on her page, she posts snapshots of hateful comments, that range between things like “love yourself, you’re a bus”, and calls for her to at least cover the ‘flab’. Some comments are shockingly weird and come from both men and women. It is almost as if the person making the comment is mentally ill. The scary part is the number of such comments, but on the bright side, many find them strange enough to call them out.

In spite of some scary inhumane comments, sarcastic remarks and accusations, her page over 35,000 likes, and it is impossible to add her as a friend on Facebook because she has exceeded the friend limit.

El Qassem has also taken the media by storm. She was hosted on El Qahira Wel Nas with Tony Khalifa, CBC, Rotana, El Horra, and El Haya as well as being interviewed by Spanish and French magazines, and the BBC. What chance do misogynists, body shamers, and hateful, spiteful people have against such successful popularity? The public statement she is making is being embraced, broadcasted and celebrated. She refers to her attackers as people with a narrow perspective of the ideal universe who somehow find comfort in attacking whatever does not fit that ideal. “They’re kidding themselves,” she says.

The artist, who is a victim of parental pressure that swayed her in the direction of studying media and journalism, originally dreamed of studying fine arts. As soon as she gets her degree, the rising star plans to launch exhibitions addressing social issues, and making public statements, travel abroad to study art, and launch her own brand where she gets to post her sketches and art on everything that she can get a hold of, from mugs, to notebooks, to posters and so on, widening the span of artistic reach to the masses.