In a country where gender inequality not only hinders women’s rights but also economic development, we speak to four female leaders who have reached top corporate positions at Vodafone Egypt, a company with a 50% female presence in executive roles. 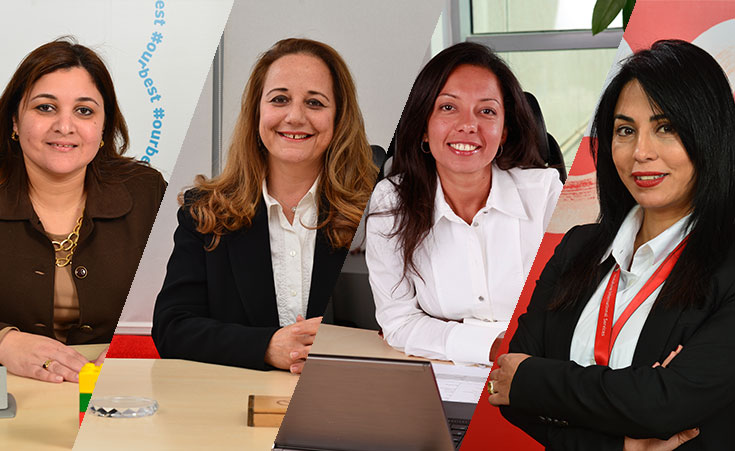 Although more and more Egyptian women have joined the workforce in recent years, gender inequality still hinders 34 percent GDP growth in Egypt, according to an IMF report. As UN Women marks 2017’s theme as Women in the Changing World of Work: Planet 50-50 by 2030, we look into Vodafone Egypt’s journey to empower women – and in turn, boost their company's growth – by incorporating 50 percent of women in its executive committee. As Women’s Day is celebrated across the world, four fierce business figures in top positions share their views on female empowerment in the corporate world.

“The inclusive and diverse work environment that celebrates and empowers its workforce, regardless of its gender or age, is one of the attributes that represent the cornerstone of Vodafone Egypt,” says Marwa El Ayouti, whose wit and determination has taken her to the position of company’s Chief Financial Officer – a role that eloquently speaks about the company's landscape. With over 15 years of experience in finance, El Ayouti spent more than 11 years in Vodafone, having joined the telecom giant in 2000.

The powerful woman held various positions as she climbed the career ladder in finance and marketing,  including Planning and Decision Support, Investor Relations, International and Roaming, and Head of Strategy. “I am proud to be among the female workforce that is enabled and empowered by the company - focusing on our capabilities, rather than any other aspect,” she says.

“The increase of the number of women in leadership positions is depicted greatly in the company’s work environment," adds Human Resource Director Nagla A. Kinawi. "This inclusive and diverse environment is what simulates business growth, creativity, and power to do more,” says the HR expert, whose 20 plus years of Human Resources and Organizational Development experience have boosted her understanding and vision when it comes to women's match-less contribution within the corporate scene. It was Nagla's expertise and vision that took her across leading positions in different fields, from Talent and Change Management, to Leadership and Management Coaching.

The company’s business sector is also dominated by a female champion, Consumer Business Unit Director Nihal Zaki. Bringing over 25 years of experience in the Egyptian and the Middle Eastern market, Nihal has embarked on different roles, including Consumer Marketing, Internet, Pricing, and Planning.  The successful woman is no stranger to the Vodafone family, as she had previously worked in the telecom giant for over 9 years. “This company believes that women have an effective role in any community they are placed in, and encourage women empowerment in their systems. This set of beliefs is what makes me proud of belonging to such corporation,” she says.

“Giving power to women to lead in the business and telecom sectors is a milestone that will pave the way for future female generations to become leaders in their own domain and in Egyptian business sectors,” adds Shahinaz Ghazy, Vodafone Egypt's International Services Director. Having joined the company back in 2004, her journey took her through multiple roles, in the departments of Consumer High Value Segment, Technical Support, Campaigns and Retention. In 2006, she was appointed Head of Vodafone Egypt’s Enterprise Accounts Management, until 2008, when she was appointed Head of Service Operations in VIS.

*The contents of this article have been sponsored.