Guess what? Cristiano Ronaldo is not only a Muslim, but he supports Morsi too. 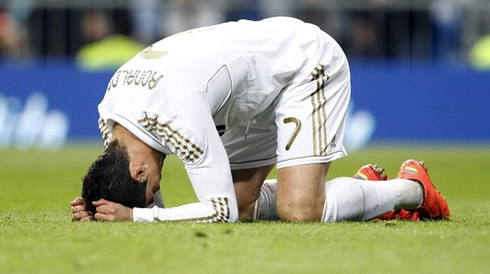 His unrelenting rule over the beautiful game, his unreal ability to swerve a ball over 40 yards, his Zeus like metamorphic body structure… all of it seems too unearthly to be real but now it’s official. It has been revealed via a viral photo circulating Facebook of Cristiano Ronaldo after a match showing that the man is in fact Ikhwan is as a shining beacon of what is possible if one is an undying follower of the Muslim Brotherhood.

Figure one shows him unveiling his political affiliation to the Muslim Brotherhood: “Yes to Morsi… No to Felool,” as his fanela cut reveals. The message attached reads:  "Allahu Akbar! God has revealed the truth! Here is one of the biggest football players in the world, MESSI, supporting your president Morsi, the man with the foolproof plans and solid decisions that helped Egypt rise to be the great country it is today. Your president is supported by an international player, praise the Lord!"

With this photo, it is also revealed that the man has an ability to metamorphosise into other people at the same time. He is ALSO Messi. Ronaldo is ALSO Messi. This is thanks to the Brotherhood and Islam. Like KFC and Man Gel before them, the Ikhwan are now using Ronaldo to create a awe and inspiration around their name.

This is a 100% authentic image taken from a recent game and should not be taken lightly. Now, we’ve heard many an Egyptian patriot sat at a café, watching a Champions League match utter “3ala fekra, el wad Ronaldo da Muslim 3ala fekra,” but we always dismissed it as dogmatic poppycock, so we decided to delve deeper. Is it true? Is Ronaldo in fact, an Undercover Brother? The findings are uneasy to say the least:

Let’s look first at Qatar. A document found at the looted MB headquarters supposes that Qatar had been giving hundreds of thousands of dollars worth of grants and gifts to the Egyptian FJP, solidifying the relationship. The Qatari royal family, at the same time, has seemed to be ill intent on owning the professional football industry.  June 2010, a member of the Qatari royal family, Sheikh Abdullah Bin Nassar Al-Thani, agreed to buy Malaga Football Club. In February 2011 the Qatari royal family bought Manchester City Football club in a successful 1.5 billion GBP bid. In February, 2011, news leaked out that the ruling Emir of Qatar, Sheikh Hamad bin Khalifa Al Thani, had made a bid for Manchester United through his company, Qatari Holdings. In June 2011 the Qatari Investment Authority bought a 70% controlling interest in French Ligue 1 club, Paris Saint-Germain and of course they had their bid successfully accepted by FIFA to host the 2022 World Cup.

Now it could be easily said this is a case of too much money, and young Qatari royal family members getting too excited playing Playstation, leading to “Please Daddy, please can we buy Man Utd???” Or is it a Machiavellian plan to control the leading characters in youth idolisation, slowly converting and manipulating  them into the ways of extremist Islam?

Now back to Ronaldo…

Figure 3: Ronaldo praying during a match with Real Madrid.

Figure 5: The shape-shifting process of Ronaldo into Messi.

So next time Ronaldo bangs one in from 40 yards, head straight to Tahrir.