The country's streets are moving at a snail's pace once more this morning, as octane 80 gasoline and diesel are both in short supply causing queues at gas stations. 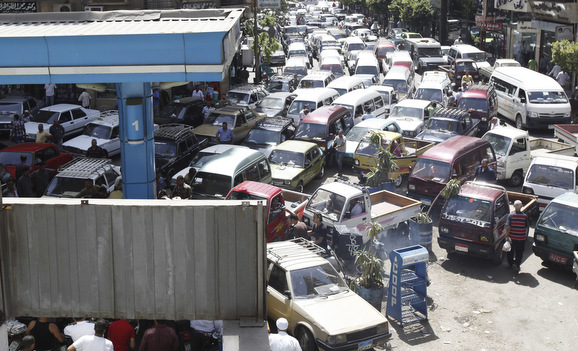 Egyptians are no strangers to queuing outside of gas stations; in the past few years we’ve been hit with a number of energy crises. And the lines are back as over the past few days there have been reports of a shortage of diesel and octane 80 gasoline in both Cairo and a few other governorates. The two types of fuel are those largely used by taxis and trucks and the alleged shortage has led to the formation of long lines outside of gas stations which has started to affect traffic across the city, congesting it in a number areas.

On Tuesday, Egypt’s Petroleum Minister Sherif Ismail said that his ministry would be tackling the shortage by injecting large amounts of petroleum products into the market. He said the ministry would be covering gas needs with 40,000 tonnes of diesel provided on a daily basis, in addition to 18,000 tonnes of different petroleum products. At the Cabinet’s Economic Committee meeting, he was reported as saying “An emergency group is working to solve the problem by providing more fuel and following up with major gas stations to ensure fuel is available,” according to Ahram Arabic news.

This is not the first time Egypt has faced shortages in gas and endless queues at stations but both these most recent shortages and the minister’s reassuring promises come only days before our upcoming economic summit in Sharm El Sheikh, where dozens of countries and international institutions have been invited to the country in the hopes of bringing in investments and resurrecting a flailing economy.