After making headlines a few weeks ago, Islam Yaken is now reportedly dead. 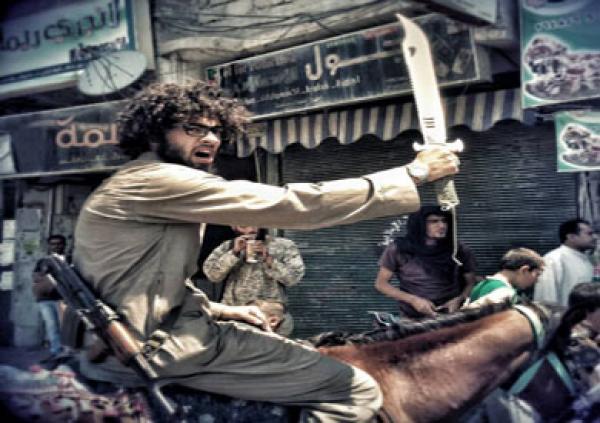 Islam Yaken. Was he a hipster, and extremist, or both? The only thing we know for sure is that Islam Yaken was just the latest Egyptian to offer his life in the name of the Islamic cancer known as ISIS.

Friends of Yaken were flabbergasted when they had found out that their young wealthy friend had decided to leave behind his cosmopolitan lifestyle for a very brief life as a member of ISIS. On Monday the Egyptian media reported that Yaken has been killed in a suicide mission in the Syrian town of Kobane.

In his final message to his comrades, Yaken took to Twitter on November 21st and wrote “I ask almighty God not to be one of those meant in the verse ‘And We will regard what they have done of deeds and make them as dust dispersed’ or be one of ‘those whose effort is lost in worldly life, while they think that they are doing well in work.” The rather lengthy Twitter statement goes on to say “Oh brothers of unification across the world...fight the enemies of Allah, the infidels, the worshippers of the cross, the Jews and the tyrannical apostates and their armies. Slay their heads with your swords, kill them with your bullets and blow yourselves up (among them). Don’t forget [the use of ] explosive devices as they are the best of deeds to gain the merciful (Allah’s) consent.”

Examining his final words, it is clear that Yaken has been brainwashed by the religious slanderers ISIS. The real question is how did this happen? Born into a wealthy Heliopolis family, Yaken was multilingual student who earned his law degree at Ain Shams University in 2013. Digging through his background Al Arabiya News Channel uncovered that as a schoolboy he was considered normal and non-violent. As he grew older Yaken developed a love for the gym and taking shirtless selfies. “He liked to show off a lot and I once criticised him for that,” the gym director tells Al Arabiya.

The investigation concludes with two possible theories of how this well off Egyptian became radicalised. The first is that he loved to show off, so perhaps he was joined ISIS for fame, which may explain why he released photos of himself brandishing a sword on horseback with ISIS. The other theory is offered by an unnamed friend who noticed Yaken personality drastically changing as a result of a friend’s motorcycle death. The sudden tragedy supposedly shook Yaken into seeing life as precious which lead to religion then religious fanaticism and ultimately to Syria to join ISIS. Once he arrived Yaken began releasing more photos of him yielding a sword or posing next to the dead.

It is still unclear why youth find ISIS attractive; however what Yaken’s death proves is that the young are but merely pawns sacrificed by the leaders of a sick twisted group that has not only hijacked Islam but also its confused youth.

[Update] Here comes the M Night Shamalamdingdong twist. Islam Yaken has taken to twitter yesterday to insist that he is not dead, but still no word if he believes he is a Hipster. Sounds like another case for the 'trusted' Egyptian media to solve.