A gas station in Maadi has recently hired female petrol station attendants, a relatively new sight in Cairo, and a move which could help propel the gender equality movement in Egypt forward. 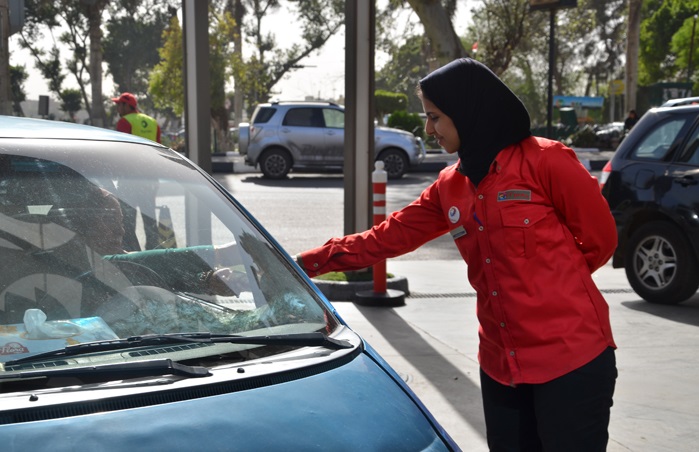 A gas station located near Corniche Maadi could potentially help initiate a nation-wide movement of gender equality by hiring female workers to pump gas, as well as handle payments, reports Ahram. It is usually highly unlikely for females to be found in certain occupations such as this one, and it was certainly no easy task for this bold decision to be made by the station. The station acquired parental consent before hiring the female workers, and they made sure not to assign the female workers to any tasks which may "grab people's attention" according to Mohamed Ibrahim, the petrol station's director, and as such cause them problems - tasks such as cleaning windows or changing tires. The women are also assigned only to morning shifts. After much speculation about how the people would react, the feedback received has been generally quite positive.

Customers are appearing to be encouraging and supportive of the movement. Despite the sexual harassment that might have been received in a gas station located in a less privileged area, the station's location on Maadi's Cornishe, a relatively affluent area, has proven important in preventing that. "Here, the station is more like a 5-star hotel, but elsewhere, we could have had a very hard time," 20-year-old employee Amira told Ahram. The station is not stopping there, for they are taking it to the next level by planning to expand the female services in other stations later throughout the year.

The unemployment rate in Egypt has been incredibly high as of late; Ahram reports that it has gone up to “27.4 percent of 15 to 29-year-olds – but the disparity among men and women is also striking; around 24 percent among women while only 9.6 percent of men.” However, moves such as this one, incorporating more women into the workforce in job roles that are non-traditional in Egypt, might prove to be a way of aiding the issue.