This man's life is the embodiment of peaceful coexistence between the two major religions of Egypt. 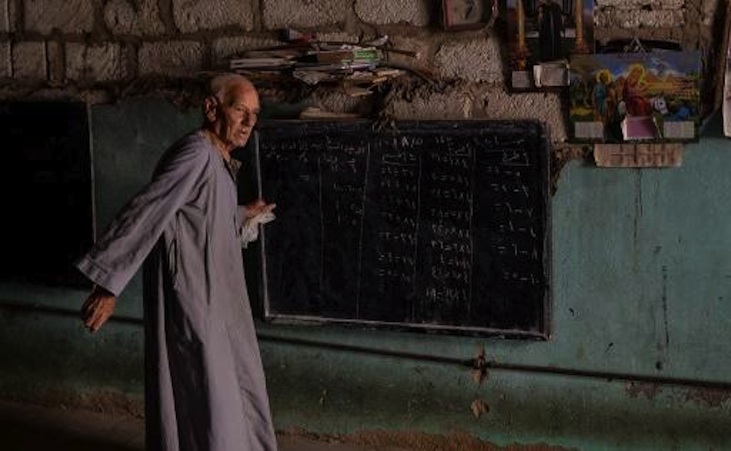 Wouldn't it be interesting if you were taught the Quran by a Christian man? His name is Ayyad Al Areef, a Coptic man, born to a father who taught at the local Orthodox Church of their small village in Upper Egypt. His story as a Christian man teaching another religion is intriguing, and enlightening to Egyptians and the world alike, on the endless possibilities of coexisting and teaching others to do so as well, particularly in an area such as Upper Egypt which is now infested with strife between Islam and Christianity.

El Watan News reports Al Areef's story, where he goes into detail about his life. He graduated with a secondary school degree, with a focus on English, and he was supposed to be assigned to a particular school as a teacher, in a city far away from his home. However, when his dad fell ill, he had to stick around – he says at that time, there were only three people in his village who knew how to read and write. This encouraged him to start a 'kottab' (small schools) in his church.

Kottab were a common form of school back in the day, where traditionally, children are taught Quran, and the ages of students would range, but they would generally be quite young. The story of Al Areef begins in 1948, when a young child came to him concerned about having to study the Quran, but not understanding it. Al Areef began teaching children the Quran with the goal of memorisation, and teaching its language and concepts. He says that back then, not many people lived in his village and that Christian-Muslim relations were not even an issue. But, today, he says "satan came in between them," as in, the rising strife between the two groups in Upper Egypt.

He taught more Muslims than Christians, he says, and he only charged 10 piasters per child, and if one could not afford it, he would pardon them and teach them anyway. He believed in passing on knowledge and the power of education. He taught boys and girls, who have went on to more advanced career paths throughout the years.

One story that we find the most endearing is him teaching the daughters of an Islamic scholar, Ahmed El Gergawy, who was appointed as an imam in the village. El Gergawy was reluctant and hesitant about the whole idea, but, over time, when El Gergawy's girls had memorised the Quran at the hands of Al Areef, he brought him a copy of it from his pilgrimage in Mecca as a thank you.