The founder of Stand Up comedy platform Al Hezb El Comedy, Hashem El Garhy found new horizons when he joined the Innoventures programme. Ahead of their Startup Nova pitching event, the comedian tells his story - and anticipates the 10 gamechanging startups. 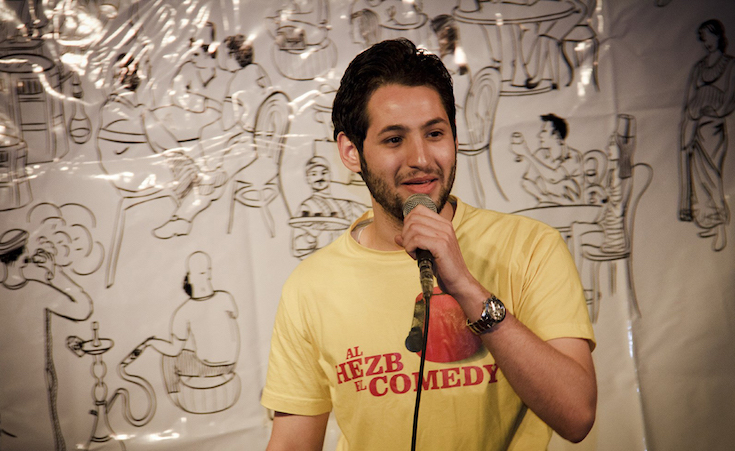 When Startup Scene asked me to write an article about my personal journey in the beautiful landscape that is entrepreneurship, I recalled a Steve Jobs quote: "You can't connect the dots looking forward; you can only connect them looking backwards. So you have to trust that the dots will somehow connect in your future." My journey started out like any other entrepreneur; wanting to make my idea come to life. It began at a very difficult time; but don't worry, this story has a happy ending.

I remember the first time I met Hesham Wahby, Founder of Innoventures. It was at one of my comedy shows in Maadi at a place called Bikya. I didn't know who he has or what he did, only that he was a friend's brother. Little did I know that this man would end up changing my life almost two years later. How, you ask? Well for me to tell this story properly I must take you to a place which I hold very dear to my heart: The District. I'll get to that later though.

Hesham founded Innoventures around the same time I started Al Hezb El Comedy in 2011. Two completely different industries, one in comedy, the other in venture capital. Both had huge potential in a time of a revolutionary Egypt. Both were very much needed.

I joined Innoventures' very first incubation program Start Up Reactor in 2012 and like any young ambitious entrepreneur, I was hungry. I was hungry to succeed. I was hungry to get funded. To make my idea come to life and to have my project get the awareness of millions of people through that funding. I worked and worked and finally had things up and running to the best of my knowledge at the time but unfortunately didn't get funded. Fast forward to November 2013, another competition arose from the ashes that was my failure in attracting potential investors to my project and just like the ambitious entrepreneur that I am, I entered it.

Enter Hesham Wahby once again. Innoventures' had a different type of competition; something that suited my project more since no one was investing in comedy anyways. The competition was called Disrupt and focused on design and media. And we won! It was phenomenal. It was the first time I ever won a competition and it felt so good. The hunger was partially satisfied with tasting a small bite of success.

Remember when I mentioned that Hesham changed my life? I say this because, with the winnings of the competition, I was able to purchase my first professional camera, sound and lighting equipment. That win allowed me to film my shows, leading to the creation of my showreel that eventually got me to be featured on CNN.

Fast forward through four incredible years to today. I'm writing this article from the Innoventure's office because I was fortunate enough to be at the right place at the right time. I was thrown into the incredible world of young, ambitious entrepreneurs, who like me, wanted to make an impact. I met these phenomenal individuals who have enormous passion and drive to take their projects to a global level. From building new industries to penetrating and revolutionising existing ones.

I met with entrepreneurs who want not only want to change their country, but change the world. I met ten ambitious teams that are driven by passion not by the revenues their projects would make. Believe me when I tell you, I was truly blown away because I felt what I was doing wasn't as impactful as their projects are and I make people laugh for a living. Go figure! Some of these entrepreneurs are now making their way through the programme, showcasing their gamechanging innovations at the Startup Nova pitching competition. Here's the 10 startups battling it out.

Using AI and smart control to produce complete solutions in sectors like agriculture, industry, smart home, solar panel, and automation, the startup sets off to tackle the climate crisis and its impact in agriculture in Africa and Egypt, where they are a main economic resource. "We discovered a real crisis due to climate change since 2008 so we moved to produce complete solution for this problem, specially in Mango farms as this crop gets the most damage each year," its founders say.

Imaginators is an online platform that helps people showcase their work professionally and create interactive presentations just by dragging and dropping the content, customising the design and adding animations and interactions. The startup recently won the MO4 Startup competition at the Techne Summit, in Alexandria.

Bioniclimbs is a Research and Development-based company for developing affordable, prosthetic limbs with a focus on high functionality, fast production and, customisation.

Nezaker is an interactive platform for parents that assists them on improving the life of their children and enabling them to make the right life decisions. Weekly, parents are sent short, organised, and customised reports to suggest some activities to do with their children in education, culture, health, sports, and sociological aspects. These reports are followed by customer service for the added value of consultation.

Agrona is a B2B innovating company working on green based composites. Agrona is offering its new technology in manufacturing chipboard, which is distinguished by its low price and wide range of applications in either industrial or furniture usages. 90 percent of current domestic consumption is covered by imports. Their new technology is a result of more than 6 years of R&D in the field of engineering woods which reduces the manufacturing cost by more than 30 percent of the current process and solves most of the problems that faces local manufacturers such as seasonality, high energy consumption and low quality. Agrona has received sales orders after developing their first production samples and has established partnerships with local manufacturers.

Okhtub is an intelligent, serious matchmaking platform for the purpose of marriage. Okhtub's mission is to help people establish a happy and successful marriage with the right life partner through providing real identity verification, designed for the MENA region, to connect soulmates based on accurate matchmaking that relies on character, culture and behavior.

The first and only company in Egypt to design and manufacture adaptable charging solutions that can charge any device anytime anywhere, Happiana has already developed their first device, a Table Charger for businesses, cafes, restaurants, and hotels, so that their clients can charge their devices during their stay. Their main goal is to terminate the sentence “Battery Low” from existence.

Ekacia’s goal is to establish a new culture in the community that promotes donating old electronics and home appliances. It is a mobile app that acts as a point of direct communication between its users and local charities by helping the users reach the nearest charity to them and streamlining the donation process. Ekacia handles sorting and repairs alongside each charity to find a new home for the electronics whilst providing a means of financial support for the charity.

TechnoRecycle is a startup active in the field of collection, dismantling and refurbishment of E-Waste. The entrepreneurs apply safe and environmental-friendly technologies to recover valuable materials from End-of-life electrical and electronic devices. Therefore, TechnoRecycle improves general welfare while realising profits through smart collection and innovative processing of materials.