Keeping Up With the Clooneys Instead of Press Freedom: How International Media Missed the Mark

With AP calling Amal Clooney an 'actor's wife' and Egypt's Youm7 focusing on her bling rather than the sentencing of the Al-Jazeera journalists, we take a look at the media circus surrounding the trial. 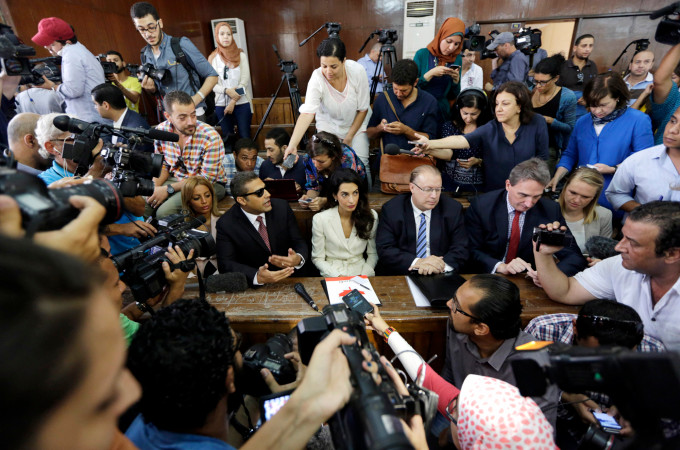 The long-winded and infamous trial of the Al-Jazeera three has finally come to conclusion, resulting in the re-sentencing of the journalists to three years in Egyptian prison. Sadly, instead of focusing on the case and the repercussions it will have on journalism, the media seemed more obsessed with the fact that Amal Clooney was representing the defendant Mohamed Fahmy, making a variety of inappropriate comments made by media both from within and outside the nation.

One can argue that Egypt’s justice system has failed to properly make the case for jailing the Al-Jazeera three. This should not come as a shock considering they were sentenced before. A majority of the decisions taken by the court tend to cause fiery anger and controversy, giving foreign media the fuel required to burn Egypt’s reputation globally. No matter how you feel about the case's outcome, the more embarrassing fail to highlight is the terribly offensive coverage given by the media who chose to focus on Amal Clooney than the legal issues at hand. Despite the trial lasting years and with the coverage of the court proceedings’ being lacklustre at best, everyone on social media had strong opinions within seconds of the verdict.

The reaction varied from the hate-ridden to the truth-laced posts depending obviously on your personal opinion of the matter. The first major controversy that spiralled out of control came after a Tweet by Associated Press, who thought it was more important to refer to Amal Clooney as an 'actor’s wife' instead of respectable human rights lawyer.

Needless to say this tweet resulted in a myriad of anger calling the AP tweet as sexist.

Dear Media,&#10;&#10;Women are not property. Their default title is not &quot;wife&quot;. They have professional credentials. Use those.&#10;&#10;#AmalClooney

@Hari_PR1 that&#39;s kind of unfair ...she excelled in her work before her famous vows

Sadly, as bad as the international coverage was, Egyptian media proved they can do worse deciding on focusing on Amal Clooney's jewellery than the case and its implication on journalists covering stories in Egypt.

The decision to focus on her wedding ring was embarrassing to say the least and launched another wave of angry tweets.

Soon after the news went viral and international media began criticising the court's decision, a spokesman for  Egypt's Foreign Affairs went on the defensive trying to diminish criticism and blame media for being pushed by foreign interest trying to destabilise the nation. Chiming in on the verdict, British Ambassador and beloved tweeter John Casson let his views be known, which resulted in the Foreign Ministry calling on him to meet to protest his tweet.

There is no information released on whether any sort of action will be taking place at this time.

Needless to say this trial has been an unmitigated disaster from its handling to its coverage. Instead of talking about press freedom and clarifying what is considered 'false news', we find the world focused on the distractions that will ultimately result in no change and further anger. This story is far from over and will likely feed the news cycle for days to come, especially considering the pressure being mounted in Canada to have their Prime Minister halt campaigning for the upcoming election to try and free Canadian Mohamed Fahmy. More to come as the circus continues.