Morsi Goes Ape in the Dock

As a clip of Mohamed Morsi screaming "WHO ARE YOU?" at the judge in court this morning emerges, it is also announced that the video of the ousted-president's prison break will air on television. 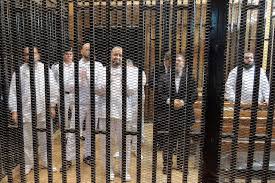 Update: The jailbreak trial of Mohamed Morsi has been postponed to February 22nd.

The ongoing saga that is the ousting of president Mohamed Morsi continues, as the former president returns to court to face charges on the breaking out of prison during the 2011 uprising. In a surprise announcement by Judge Shaaban al-Shami, the trial will be broadcasted live today, and the video of Mori's prison break will be made public to the media, when it is introduced as evidence. The announcement comes as a shock as the media was barred from the first court session that took place in November. Alongside Morsi are fellow Brotherhood members Mohamed Badie, Mahmoud Ezzat, Saad al-Katatni, Mohamed al-Beltagi, Essam Erian and Saad al-Husseini.

During the prison break, attackers killed more than 50 policemen and prisoners before aiding over 20,000 other inmates in escaping. The only defence strategy that Morsi's team has come up with so far is the same many children use the playground. The "I can't hear you" style of defence doesn't seem to be working, and rumour has it if his antics keep up that he will find himself in a soundproof cage as his fate is decided.

Here is a clip of Morsi's Defence plan: