In an ironic twist, police officers, who were just weeks ago mandated with enforcing the new protest law, have broken it themselves, marching for higher wages. 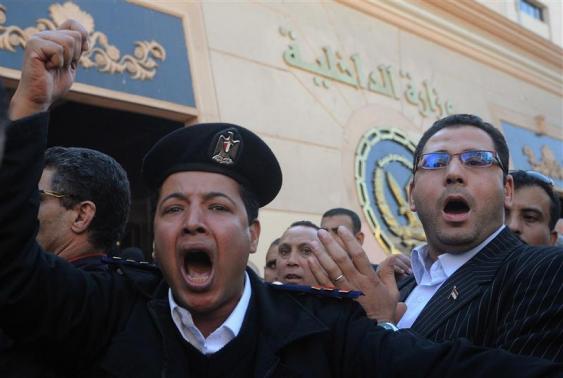 The first thought that comes to mind when I think about the Egyptian police force is......Fuck the popo! Since returning to Egypt, I am yet to read about the police doing something I agree with. Usually, all you ever hear about is their constant disregard of people's dignity and abusing their powers resulting in serious harm and often deaths.However, on Sunday morning the headline was different. On this particular day, the Egyptian police rallied together in protest to demand higher wages. What makes this story hilariously hypocritical is that these are the same cops that have been enforcing the recent protest ban, indiscriminately arresting anyone fighting for their rights. Furthermore, these protesters are tried in lightning fast military courts with very little chance for any justice.

The popo's protest took place after 200 non-commissioned officers were given permission to protest at a Police Club in Cairo, where they hoped officials would come and discuss their pay demand. When they received no response, they marched to the Interior Ministry in defiance of the new law. According to security sources, the officers shoved barricades at fellow members of the security forces outside the club, before breaking through to march.

If this were Islamists or any other angry group, this action would have led to violent showdown, and plenty of arrests. So who will hold these police protesters accountable? The answer is probably no one, but if there was any equality, they would all be doused with water cannons and tear gas, thrown in jail, or better yet, have the protest ban removed. The last thing they should be doing is getting back to the busy work of cracking down on other protesters.

The truth is that if the police force want a higher pay, then they need to be held to a higher code of conduct. The abuse of their powers is but one of the many problems that trouble Egypt, and it is hard to side with them when it is clear that they are part of the overall problem. These hypocrites deserve the same treatment any other protester gets; maybe then they would empathise and realise that they are dealing with justifiably angry masses, and that enforcing the protest ban is ludicrous, especially if they plan to protest themselves. Only in Egypt.