Six members of the Ultras White Knights face various terror-related charges, after they were arrested during clashes with the police following protests by the pro-Zamalek fans. 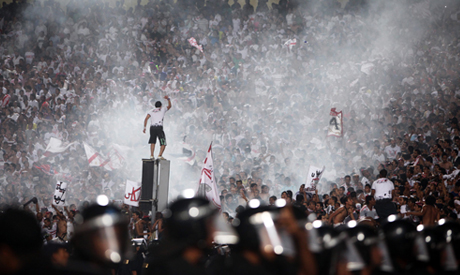 A group of Zamalek football fans are facing terror charges following recent protests against the club.

The move comes following a week of violent clashes between supporters and police. Prosecutors today ordered the detention of six people who belong to the Ultras White Knights on a series of terror charges.

Tensions between cops and protesters reached a boiling point on Saturday, resulting in numerous injuries and 36 arrests in the Shubra district.

The fans were protesting against the detention of some of their comrades, who are facing charges of trying to assassinate club chairman Mortada Mansour.

However human rights lawyer Tarek al-Awadi today slammed the controversial move. He said, “Ultras are neither thugs nor terrorists, they are passionate football fans, an energy of hope and patriotism, let’s not turn them into an angry force.”

Mansour immediately accused the White Knights, branding them as members of the Muslim Brotherhood, and claiming they had “political motives.”