[Update]Egypt Spies on Your Social Media

An investigative report has revealed that the government will now have extensive access to citizens' private information on various social media platforms through a deal with a U.S.-based cyber-security firm. 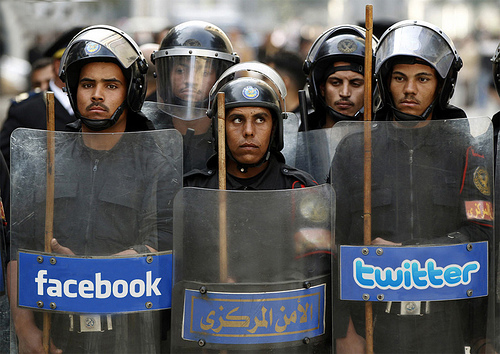 You may not 'like' to hear it, but the internet is buzzing after a Buzzfeed report suggest that Egyptian government will now have unprecedented access to communication on various social media platforms.

According to Buzzfeed, See Egypt is a Cairo based “system integrator,” which over the summer won a bid from the Egyptian government to monitor communication between Egypt's social media users. By using a Deep Packet Inspection surveillance system, See Egypt, and by default Egyptian authorities, can now locate and track users while extensively monitoring online traffic.

See Egypt, is an affiliate to U.S.-based cyber-security firm Blue Coat, which provides the country's state security and trains government operators to survey data collected from email and social media accounts. “Our job as a company is to give them the system. I train the government how to run it and we give them the program,” Ali Miniesy, the CEO of See Egypt, tells BuzzFeed, adding, “The program, the training we give, can also be used to penetrate WhatsApp, Viber, Skype, or other programs if needed.”

When asked what they would be monitoring, an unnamed Interior Ministry official said, “We are watching conversations between Islamists, or those who discuss Islamism. We are watching communities, which we consider at risk.” when asked to elaborate he also suggests that they will be keeping a close eye on “debauchery” or “homosexual acts” would be watched “for the protection of Egypt.”

In a copy of the tenders issued by the Interior Ministry, and published on several Egyptian news sites, the ministry spelt out the type of online communications it will be searching for:

Blasphemy and skepticism in religions; regional, religious, racial, and class divisions; spreading of rumors and intentional twisting of facts; throwing accusations; libel; sarcasm; using inappropriate words; calling for the departure of societal pillars; encouraging extremism, violence and dissent; inviting demonstrations, sit-ins and illegal strikes; pornography, looseness, and lack of morality; educating methods of making explosives and assault, chaos and riot tactics; calling for normalizing relations with enemies and circumventing the state’s strategy in this regard; fishing for honest mistakes, hunting flesh; taking statements out of context; and spreading hoaxes and claims of miracles.

Rumours of further social media surveillance is not new; the questions now is just how broadly the technology will be used in warranting arrests.

To read the Buzzfeed exclusive by Sheera Frenkel and Maged Atef click here.

[Update] The Interior ministry released a  statement calling the claims made in this Buzzfeed investigation completely false. It also lashes out at local media for widely broadcasting the article, saying that "Egypt is facing a lot of challenges" and that "this type of news aims to shake the people's confidence in the interior ministry." It is nearly impossible to confirm if the Interior Ministry is telling the truth or not, as most of the quotes come directly from See Egypt CEO Ali Miniesy. Someone is lying but only time will tell.