Revolutionizing diverse industries like fashion and energy with clean tech, these 9 trailblazing startups are turning waste into profit and pioneering the recycling trend. 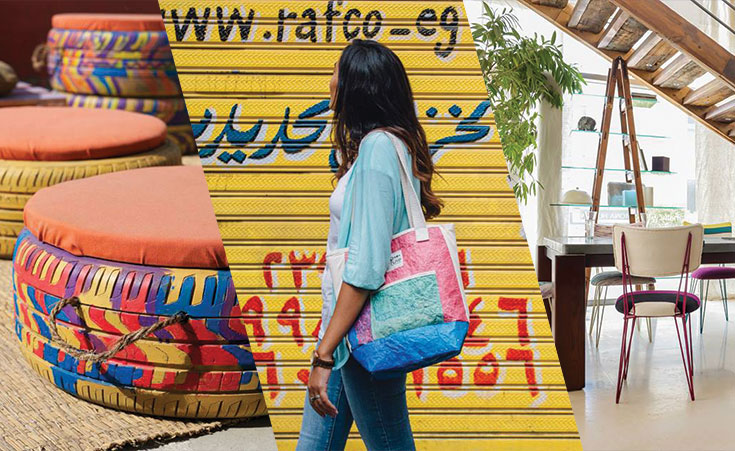 Startup alert: there is a new opportunity for entrepreneurs who strive to recycle e-waste, aiming to support sustainable companies and fuel the fastest growing industry in the world. The E-Khorda programme is offering Egyptian entrepreneurs with a chance to build game changing green companies by 2017.

Crafted through a partnership between Egypt’s Ministry of Communication and Information Technology (MCIT) and the Government of Switzerland, the programme offers 10-15 e-waste startups from Egypt's acceleration package – including mentoriship, office space, training, and marketing benefits - with the top three performing startups qualifying for Egypt's Innoventures Startup Reactor Accelerator for an additional six months. Winners will also get exclusive perks, such as the chance to pitch their ideas at the Global Entrepreneurship Week in November. The programme is accepting applications until March 5th, but entrepreneurs searching for inspiration will likely find it in Egypt's  highly developed recycling scene. We’ve listed 9 of Egypt’s coolest startups disrupting  across different sectors - from fashion, to furniture, to energy and industrial waste - and recycling their way to a more sustainable country.

1. Recyclobekia: Kicking off in a small garage in Tanta, Egypt, and a starting capital of only EGP 6,000, this startup ballooned to be featured by Forbes as one of the Middle East’s top 10 startups you need to know about. Co-founder Mostafa Hemdan, who created the groundbreaking business as part of a project for the Injaz incubation programme, became the first entrepreneur to generate revenue from recyclable material from electronic waste in the region. “People have no idea what they are actually throwing away,” said Hemdan in an interview with CairoScene. Recyclobekia's co-founder Mostafa Hemdan in a photo shoot for CairoScene's 25 under 25 in 2015.

2. ReTyre: A competition focusing on solid waste management was enough to ignite Mahmoud Mohsen's passion and give him the motivation to turn his dream job into a day job. The entrepreneur and petroleum engineer transforms tires into rubber cubes, which are sold on to factories to process them and create new rubber products, or to factories that use rubber as alternative fuel for their power generation. Having realised that Egypt generates more than 20 million tons of wasted tires per year - only 10 percent of which are recycled - the entrepreneur started by looking for those who were recycling manually, learning from them, and applied a mechanical aspect to launch his business in 2014.

3. Up-Fuse: “Our project started when we traveled to Berlin and, as we went to the supermarket, noticed that they were charging for the plastic bags. In Egypt we are very generous with plastic bags, so we didn’t understand this until we realized how harmful they are to the environment,” say Rania Rafie and Yara Yassin, co-founders of Upfuse. Transforming nearly 3,000 plastic bags a month into fashionable and colorful fabrics, the designers create backpacks, tote bags, wallets, and cases, not only creating sustainable fashion but also supporting communities.

Partnering with NGOs in Cairo’s Manshyat Nasser, known as Garbage City, the social enterprise teaches the students enrolled in the NGOs to up-cycle the plastic in their free time, in order to earn income to support their families. This year, the innovative company was also selected by RiseUp as one of the 6 Startups going to Silicon Valley in April, as part of their adventurous initiative, Riseup Explore. 4. Tagaddod: It all started in 2013 as a senior class project in waste management of vegetable oil for Cairo University student Ahmed Raafat and Nour El-Assal, a petrochemical engineer at the German University in Cairo, who then partnered with business expert, Mariam Afifi, to turn the idea into a success. Tagaddod is now focusing on bio-diesel production as a clean type of fuel made out of cooking oil. After succeeding in getting used cooking oil from hotels and restaurants, they have now started a new project, called Green Pan, to collect cooking oil from homes. Launched with the support of accelerator Flat6Labs and Cairo Angels, the startup now exports to Lebanon, Jordan, and across the European continent. Its founders were part of CairoScene's 2015's 25 under 25, and were also recognised by Forbes as one of the country's most promising startups. The entrepreneurs behind social startup Tagaddod create biodiesel out of used oil.

5. Dr. WEEE: In 2006, Egyptian entrepreneur Essam Hashem saw an untapped opportunity in the Middle East in the field of e-waste management, due to the value of the components that could be extracted - gold, silver, copper, platinum and titanium. Seizing the opportunity, he founded Spear Ink and began recycling empty ink cartridges, refurbishing and re-manufacturing new cartridges which can be very expensive.

The company operates on a franchise model, providing the machines and training on how to refill and recycle ink cartridges, with a head office based in Dubai and factories in both Alexandria and Cairo to build the machines themselves. The entrepreneur also has a plan to expand to the gulf, opening a new franchise business in Dubai called “Dr. WEEE", a mobile app for e-waste collection that has been launched in Egypt in February 2017, in parallel with introducing an Egyptian e-waste shredder to Egypt's market, with plans to franchise it in UAE too.

6. Mobikya: Merging Mobilya (furniture) Designing and Robabikya (old stuff) Mobikya crafted a new concept of green interior design using upcycled furniture fabrics and car tires. The design-oriented studio was founded by Ibrahim Abougendy in the heart of old Cairo in 2016, focusing on 'greening' people's lives by repurposing and recycling old items. The studio is specialized in producing a variety of green products for homes and businesses, such as chairs, stools and even tires thrones. 7. Biodiesel Misr: One of Egypt’s top 20 startups according to Forbes, the startup produces 600 metric tons of bio-diesel per month, generated from used cooking oil, with international quality standards. Their production chain mainly starts with collecting used oil from homes and restaurants, producing the bio-diesel to make glycerin products and renewable fuel. Its founder Mahmoud Abou Elrokab, a sports commentator for Abu Dhabi Media, has ambitious plans: he aims to convert rice straw, rice husk, and agricultural waste into green liquid fuels by 2019.

8. Reform Studio: Spearheaded by two young women, Reform Studio creates stylish furniture items out of plastic waste. The offspring of a university project at the German University in Cairo, the startup was launched in 2014 by Hend Riad and Mariam Hazem, one of CairoScene’s 25 under 25 entrepreneurs, who focus on designing sustainable products that help solve the country’s waste problem. Their company, incubated by Egyptian accelerator Flat6Labs, creates and designs fabric, beach clutches, placements, and rugs. Reform Studio has made a name for itself as one of Cairo's most classy design stores.

9. ZeroWaste: One of the most promising startups in 2017 to look out for, given their innovative philosophy in recycling unutilised resources, the startup came up with a way to collect aluminum cans and turn them into products by encouraging people to give them their cans in exchange for phone credit through their project CanBank. Founded by Eslam El-Refaey, the company has already won the Innoventures competition at last year's RiseUp Summit and is expected to launch effectively in April.