The ad and the actress have seen a lot of negative reactions from officials and social media for their portrayal of an impoverished Egyptian family's daily struggle for potable water. 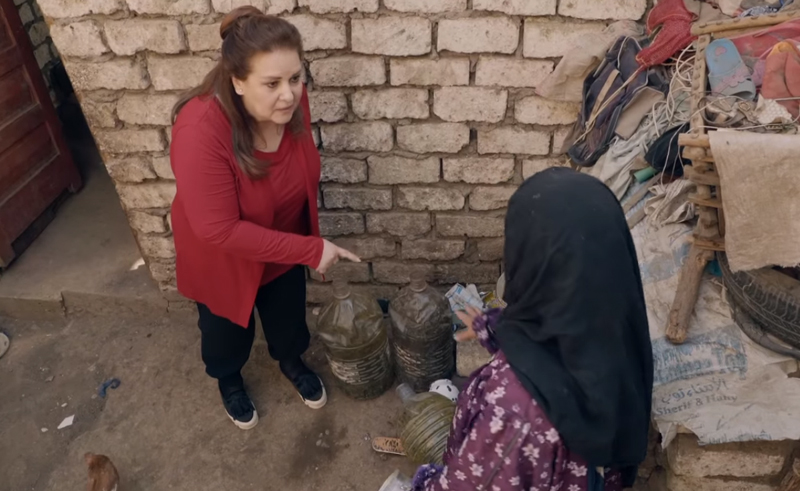 A Ramadan TV commercial for the Beit Al Zakat charity foundation, which works under the auspices of Al Azhar, has been ordered off the air by the Islamic organisation for its negative portrayal of the government’s social solidarity efforts, according to Huffpost Arabi.

The ad features a woman by the name of Afaf showing actress Dalal Abdulaziz what she and her family need to do to get water; carrying if from the river to her house in dirty plastic bottles. The water appears to be of a greenish-brown hue. The video ends with Abdulaziz saying that it takes around 2000 EGP to bring clean running water to families like Afaf’s, encouraging viewers to donate to Beit Al Zakat to fund the infrastructure required to connect such homes to water supply.

But since its debut on TV at the beginning of Ramadan 2017, the video has been a lightning rod of controversy. Among the things that attracted the ire of social media users is a scene where Abdulaziz’s simply says "ma3lesh (it’s alright)” in the video in reaction to Afaf’s telling her the ugly details of her family's daily struggle for potable water. The actress defended herself by saying that she uttered the line after a long discussion with Afaf. Another problem pointed out by people was Abdulaziz’s showing Afaf's family's plight to the world instead of simply helping her herself, to which the actress argued that the point of the video was not to show whom she personally helps, but to encourage people to help families like Afaf’s, and that charity is not a public event.

The ad, as the Beit Al Zakat Treasurer Safwat Nahas explained, was intended to show the very real cases the foundation aims to help using people’s donations, and was not intended to parade anyone’s suffering on national TV.

But even more important are the conditions the video shows the family in, which even captured the attention of Al Azhra Grand Mufti Ahmed Al-Tayeb, who filed a request to the Supreme Council for the Administration of Media to ban it for “discrediting the government’s efforts to provide clean running water.” Adding that the commercial did not communicate the necessary message and showed Egyptians drinking polluted water, which in turn provides further justification for the Sudanese government to stop importing vegetables from Egypt.

Part of the controversy leading to the banning of the video is that Afaf’s household still hasn't been connect to clean running water; in a video posted on Facebook a couple of days before the ad was banned, Afaf says that her circumstances remain unchanged even after the commercial aired.

Al-Tayeb then announced that Afaf’s house would be connected to clean running water as well as a monthly subvention from Beit Al-Zakat.