A fitness wonderwoman and the fierce co-founder of Jumpsuite, Norshek Fawzy exclusively tells us the thrilling moments leading up to her business, as she created three startups, exited one, and had two kids, all at once. 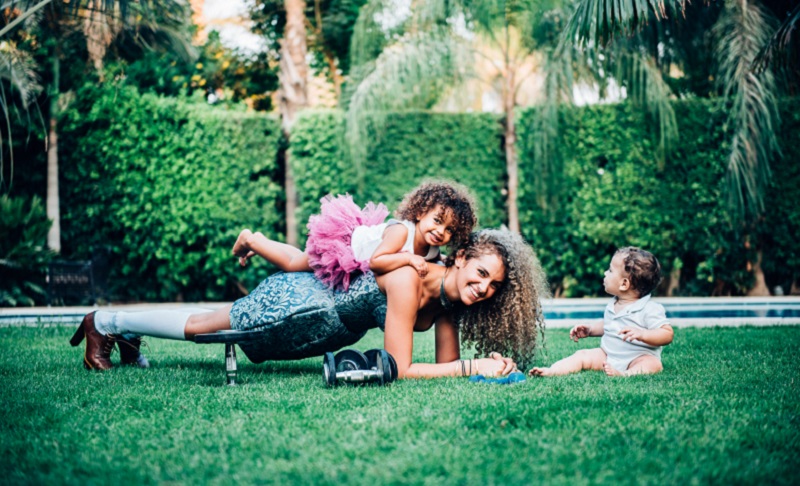 2011, Revolution year. Nabil and I were just married; we had no house, no job, and a state curfew. You’d think we'd try to look for a job or leave the country, but instead we decided to play! We took something we both had passion for – fitness - and overnight we started something called The BootCamp. It was a decision we took at 12 AM as we watched Vampire Diaries with his family. We woke up the next day, bought some equipment and rented the football field for the next day. We spent 12 hours designing our first routine, then went to the garden, set it up at 1 AM and tried it out. By then we were ready to send a message to our neighbours and friends, saying: “Hey guys, we are starting a BootCamp training tonight at 7pm at Gardenia’s football field. Come try it out and give us feedback.”

People loved them. By the third session, we had 27 people and decided we could only take 20 per session. Needless to say, we didn’t charge for the sessions, we didn’t know what this actually was until a nice lady came after the session and asked “How much should I pay?” Nabil and looked at each other and we just said “hmm it’s 50,” and this is when we got our first EGP 50. Over the following months, we worked on a website where people booked a place in our sessions; we expanded to three locations and had over-booked sessions, waiting lists, the whole shebang! I still remember each and every one who ever came to our sessions, they used to call me ‘the fitness Nazi’, because I wouldn’t let anyone slack, not even for a minute; I really enjoyed pushing their limits.

From fitness Nazi to my first exit

At this point we used to do fitness tests and randomly kick their asses to see how well they progressed. So naturally, being as obsessive as we are, we decided to make an event out of it. In partnership with two of our closest friends Khaled Halawa and Karim Gabriel, we created something called The Champ; an obstacle course that would really test the hell out of our people’s fitness level while having tons of fun. We held the event in Gezira Club, and managed to secure Edita, Redbull, and Gold’s Gym as sponsors.

I was nine months pregnant, it was two days before I left to LA, and we spent 30 hours awake setting up the club expecting to get 80 participants or so. But the next morning was like Christmas. We had 200 participants including girls, boys, men and women. It was an amazing atmosphere. AND we got an investor interested in The Champ; well hello there! We worked with him for months on turning the project into something bigger, and this is when we had our first exit. And it felt GOOOOOOOOD. Opening our eyes to internet

When in LA, where we went to bring Tala into this world, we saw an opportunity. We realized that we always took time to personalize nutrition and workout plans to supplement BootCamp sessions, since people are all different, and so are their targets. To be precise, we’d designed 2,315 plans on paper. And over there we were introduced to a lot of tech mentors, startup advisors, and fitness celebrities; we were introduced to the key people who ended up changing the way we think. They simply made the world ‘online’ mean a whole new thing to us. And overnight we started The Wellness Log.

We sent out a message to all of our BootCamp clients saying we now offer customized programmes, and in the first week we got 20 orders. We sent a driver with a paper application to each and every one, who would wait for them to fill the application, get the payment, and come to us. Week after week, we would have to close orders because we can only design so much daily. And then it came to us: we must invest in a proper online platform, this ad hock program designing method is bullshit. So, we got a tech team and we invested everything in it, and I mean EVERYTHING. Within a couple of months we had what I proudly call the best software I ever used to design programs, we hired more trainers and nutritionists, and we went global. We got orders from all around the world, clients getting online, and printed programs being shipped everywhere. We got CRAZY before and after pictures. In a year, we had four trainers and three nutritionists from different countries across the world working with us and Nabil and I stopped designing programs.

We worked hard on enhancing our product and properly marketing it; and this is when we thought about Kareem Gamroor, who had been following a programme with us and already showing amazing results (I remember we posted a before and after picture of him in his boxers and, boy, did the girls like it!). I remember telling Gamroor that we wanted him with us, he smiled, then I said “as a partner,” and I think I scared him a little. But he was up for the challenge and came in with his full power, with all his Google experience and all.

Why we needed a break

After almost a year working together, Nabil and I were in San Francisco (to bring our second child, Tajj, into the world). We visited 500 startups, YC, we attended Startx Mixer, Google offices, Twitter, Slack, and Apple; and I even was accepted to attend the YC Female Founders Conference. All those people and all those stories made us realise one thing that was never ever going to come to mind: we need a break, a productive break. So, in a couple of months, the three of us and Nabil’s cousin, who is a Stanford MBA graduate, worked on a project together. We needed to prove to ourselves that we can still do it, and we did. This gave us the motivation and energy to go back and decide to take The Wellness Log to the next level. We came back to Cairo and found out that Flat6Labs was opening a new session in Abu Dhabi, so we instantly applied; but we didn’t get a response. Until one morning, Gamroor got a message from Ramez from Flat6Labs asking why we hadn’t submitted the application. And we were all like, WHAT? And we double checked, and apparently, we hadn’t, so we did. We got an interview the same day which Gamroor had to take on his own from his phone - but WE GOT IN!

Nabil and Gamroor headed to Abu Dhabi before me (I couldn’t go with the kids, and I had never ever left them overnight) until one night I decided “I need to be there for the opening night.” So I took the most selfish and un-mommy decision ever. I weaned Tajj at 11 months, packed my bags and left my kids with two mamas; mine and Nabil's.

Being in Abu Dhabi, Dubai, and around other international startups was exactly what we needed. On our first meeting with the Flat6Labs team over there (right before I left) we decided to go through our ‘spin-off’ for The Wellness Log. We decided it was time for Jumpsuite – That was November 2015.

We left the meeting, sat together, and put up a plan. And another plan. And somehow with Nabil’s product roadmap and tech team, he managed to launch Jumpsuite, the world’s first online marketplace for fitness and nutrition programmes by demo day, in February 2016 - which was to us a dream. Gamroor was the only one who made it to demo day and Nabil watched him live in our living room in Cairo with both our families. We watched him KICK SOME SERIOUS ASS! We got amazing feedback on the product, on the concept, on the team.

In a couple of months, we were featured by Wamda, by Forbes, we got serious recognition for our work on international media, and it was refreshing. At this point we knew we needed to expand next in the US market, to break the barrier between the two worlds. We want to offer programs to clients in the US by Arab professionals and vice versa! So, we set up a branch there and became a legit international company. We were invited to two great events in 2016, the Bahraini Angel Investor summit and Creative Business Cup in Denmark, while we had some serious business meetings in Cairo. Nabil handled business in Cairo, Gamroor went to Denmark and I went to Bahrain - I pitched to a room of investors, which was my first public big pitch since we started this company. That day I had CNN and national Bahraini TV both interview us. A month later I was surprised that CNN didn’t just interview us; they put us a success story and created an amazing video about our product!

Now to jump forward after a few months of hard work to today. Last month, Nabil who has always been our CEO (even when it was just the two of us) decided it’s time for a change. Something fresh. And I thought “damn it, we’ll get a stuck-up CEO who doesn’t know us and will come in and be an asshole.” But to my surprise, this sentence was continued with: “so I appoint you as CEO,” and I was like, huh? Me? Are you sure? I mean I know this company inside out, yes. But am I CEO material? We had a long talk the 3 of us, about his decision and we came to the conclusion that they trust me enough to kick me in the butt to take the position. So, I did.

Say hello to Jumpsuite’s new CEO! I’m very optimistic about this phase, having a new office directly on the beach in Gouna. Leading the company. And pushing all my limits to prove my husband and partner right.