Apparently, this teacher is supposed to teach them about psychological wellbeing. 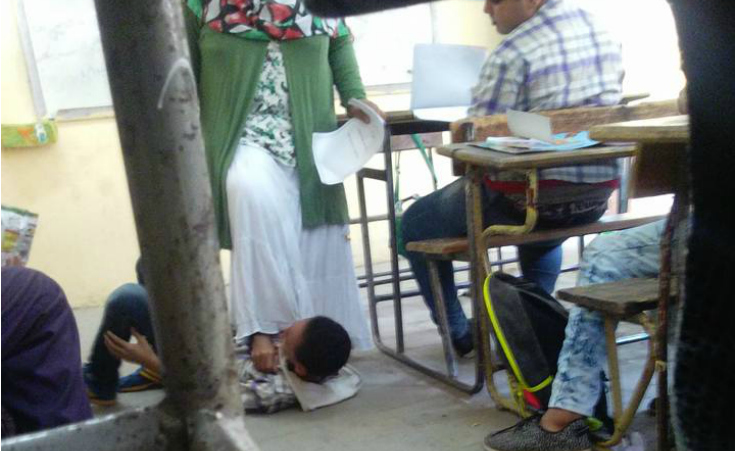 A horrifying photo surfaced across Egyptian social media on October 23rd, showing a boys' classroom in Egypt with a teacher keeping one of her feet at the neck of a student lying on the ground under her. The photo, according to Samar Soliman who posted it, is of Mrs. Adila who teaches middle school boys 'psychological wellbeing', which is the equivalent of a counsellor.

The boy, who is identified as Mohamed Hamdi, is in his second year of his junior secondary – making him around 12-13 years old – at Mohamed Abdo School. Apparently, the story is that his classmate whistled during class, and Mrs. Adila decided it was Hamdi who was misbehaving. As a punishment, she decided to have him stretch on the ground while she keeps one foot on his neck to cripple his movement. In addition to that, she also held a cane in one hand to hit him if he tried moving. The original post is below:

According to witnesses, Hamdi kept begging her to let him go, which she refused. His mother barged into the school the next day and demanded an explanation for the mistreatment of her son, to which the teacher responded, "He fell on the ground, and I was trying to help him up."

On the other hand, Soliman says the boy refuses to go to school because he is being taunted by his classmates for "being stepped on like a cockroach." Soliman questions how society expects adolescents and children to be respectful human beings with bright futures and a great university degree when they are consistently being stripped of their dignity in spaces that severely mistreat them.